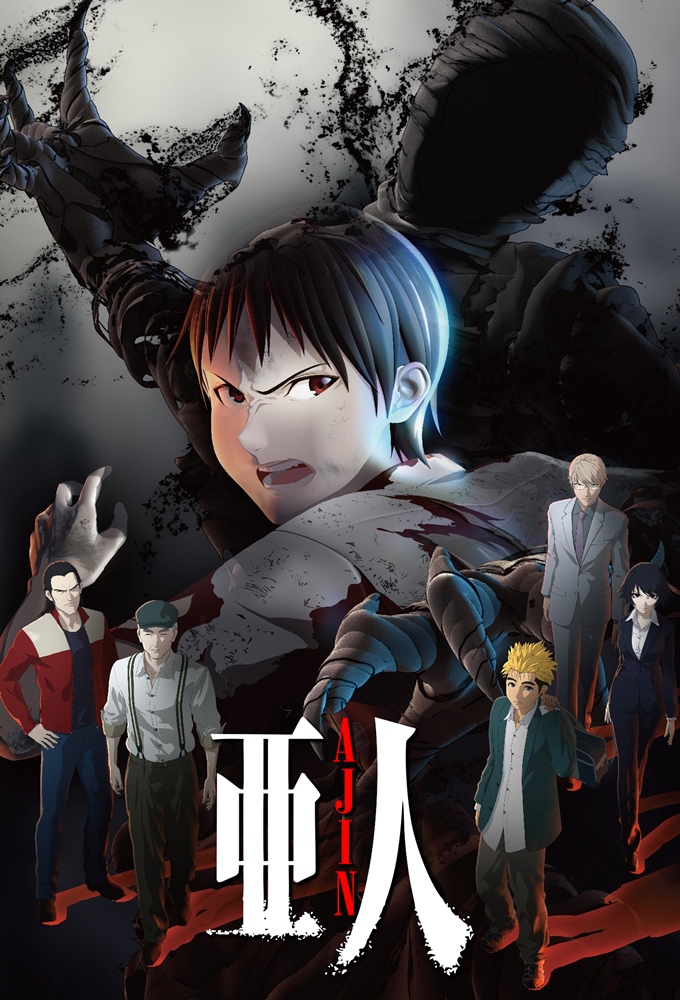 (2016)
Originaltitel: Ajin
Skapad av:
Release: 2016-01-16
TV-bolag: Tokyo Broadcasting System
Längd per avsnitt: 25 min min
Status: AVSLUTAD
Ajin are humans that cannot die. Seventeen years ago, they first appeared on a battlefield in Africa. From then on, more of their kind are discovered within the human society. Their rarity in appearance means that, for experimental purposes, the government will generously reward anyone who captures one. In the present day, for what a certain high school student expects to be a typical summer holiday, his life is about to turn unexpected... (TheTVDB)
Action Skräck Spänning Animerat

SPECIAL
1
2
SÄSONG 1

1
The History of Relationship We Never Had 2016-01-16
The History of...
2016-01-16
A gun battle takes place in Africa in which a single western soldier outguns many locals, no matter how many times he is killed. He is eventually felled by tranquilizer darts and removed in a U.S. Top Secret body bag. Later, in Japan, Kei Nagai is leaving school, lost in his thoughts, crossing the...
Regisserat av:

2
Why Is This Happening? I Did Nothing... 2016-01-23
Why Is This...
2016-01-23
Kaito takes Kei Nagai into the hills on his motorcycle. While stopping for fuel, Kei is recognised by two criminals in a van who have just abducted a schoolgirl. The criminals follow them and when the boys stop by the side of the road, the criminals attack. The leader pins down Kei and chokes him...
Regisserat av:

3
I Think Im Done For 2016-01-30
I Think Im Done For
2016-01-30
Kaito and Kei are seen and pursued by another motorcyclist. Meanwhile Yu Tosaki recognises Sato, an Ajin hunter at the original accident scene. The other motorcyclist causes the boys to crash, but Kaito recovers and knocks him unconscious. Unfortunately Kei has a broken leg and cannot move. He uses...
Regisserat av:

5
The Kind of Garbage That Looks Down on... 2016-02-06
The Kind of Garbage...
2016-02-06
Yu Tosaki and the police arrive and take Kei into custody. Sato reveals that it was his plot to have Kei captured by the government so that they would mistreat him and thus turn him against humans. The government surgeons begin experimenting on Kei in a sealed room. Under intense pain, his Black...
Regisserat av:

6
Ill Murder You as Well 2016-02-20
Ill Murder You as...
2016-02-20
Sato suspects that something is different about Kei and when Sato starts to kill helpless surgeons, Kei objects and kills Sato. In the Ajin research centre, Ikuya Ogura tries to explain the Black Ghosts and Yu Tosaki insists that Izumi Shimomura stay by his side to protect him. Sato hunts Kei to...
Regisserat av:

7
I Will Definitely Suppress Them 2016-02-27
I Will Definitely...
2016-02-27
After losing the sample, Kei, Yu Tosaki receives a warning from the minister. He recalls the time when the minister offered him a position in the Ajin Control Commission and where he saw weapons being tested on Ajin 002 for potential profit. As Sato leaves the research complex, he addresses the...
Regisserat av:

8
Brace for Impact 2016-03-05
Brace for Impact
2016-03-05
Kei recovers from drowning in the ocean but then is run into by an old lady on a bicycle. He decides to stop and help her. Sato addresses the seven Ajin who attend his private meeting and gives them the option of joining him in a massacre. Those that dont, he plans to keep as captives. Three decide...
Regisserat av:

9
Wait, Lets Talk Over This Again 2016-03-12
Wait, Lets Talk...
2016-03-12
Ko Nakano comes across Black Ghost tracks and finds Kei Nagai who is now acting as the grandson of the old lady in the village with her consent. Ko suggests that they join forces to fight Sato. Although Kei agrees with Ko, he really wants a peaceful life, and traps Ko in an abandoned truck to...
Regisserat av:

10
Disintegration Begins as Soon as It... 2016-03-19
Disintegration...
2016-03-19
Ogura starts telling what he knows about Ajin and Black Ghosts or IBMs (Invisible Black Matter). For example: IBMs have individual characteristics and are unstable; last only about 10 minutes; can be generated only 1-2 times per day; are difficult to control in the rain. Kei keeps Ko locked up and...
Regisserat av:

11
Now Then, Its Showtime 2016-03-26
Now Then, Its...
2016-03-26
Satos group puts his plan into action with the assistance of the three new Ajin, sabotaging a building dressed as cleaners. Tosaki coordinates the defense of Grant pharmaceuticals whose CEO does not stop production or send staff home. Kei still keeps Ko captive and refuses to stop Sato, enjoying...
Regisserat av:

12
Man, Im Exhausted 2016-04-02
Man, Im Exhausted
2016-04-02
The Metropolitan Police Assault Team use different tactics to continually kill Sato to prevent him from acting against them. Two of Satos Ajin begin shooting the police, but are themselves targeted by police snipers. However Tanaka uses his Black Ghost to attack the snipers in turn. A break in the...
Regisserat av:

13
Satō-san, Its Your Fault Everythings... 2016-04-09
Satō-san, Its Your...
2016-04-09
Mr Keita reports Kei Nagai to the police to claim a reward. Yu Tosaki orders all available forces to the area to catch Kei. When Kei is confronted by the police, he uses his Black Ghost to delay them allowing him to escape into the woods. He uses Ko Nakano’s phone to throw the police off his...
Regisserat av: