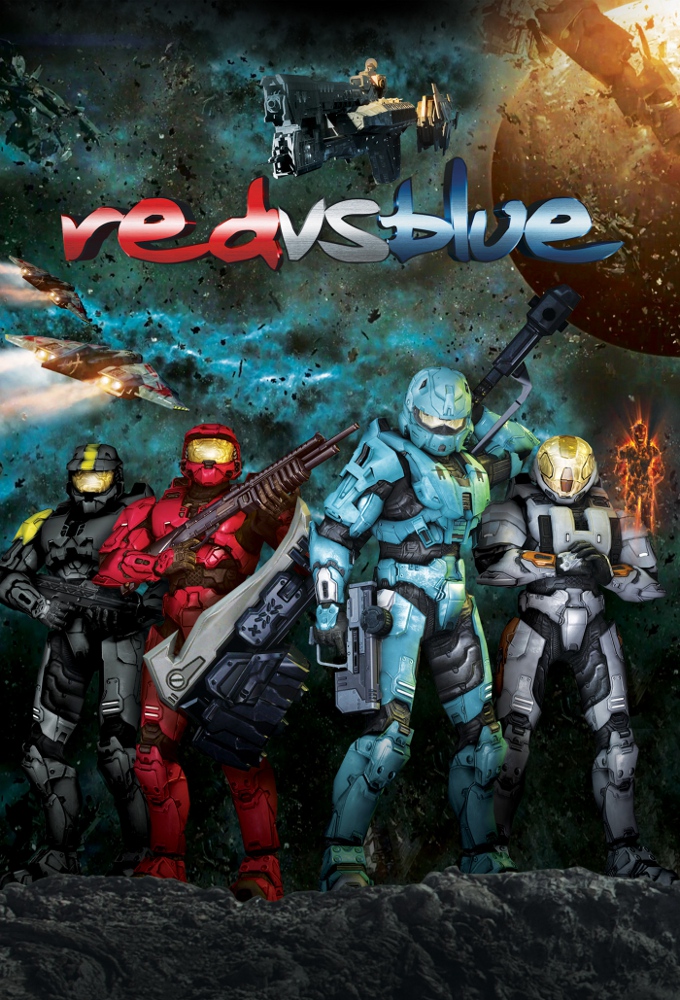 (2003)
Originaltitel: Red vs. Blue
Skapad av:
Release: 2003-04-01
TV-bolag: Rooster Teeth
Längd per avsnitt: 10 min min
Status: AVSLUTAD
Red vs. Blue centers on the Red and Blue Teams, two groups of soldiers engaged in a civil war. Each team occupies a small base in a box canyon known as Blood Gulch. According to Simmons (Gustavo Sorola), one of the Red Team soldiers, each teams base exists only in response to the other teams base. Although both teams generally dislike each other and have standing orders to defeat their opponents and capture their flag, neither teams soldiers are usually motivated to fight each other-... (TheTVDB)
Animerat Komedi

2
Red Gets a Delivery 2003-04-20
Red Gets a Delivery
2003-04-20
Sarge reveals the new jeep that has just arrived from Command and that a new recruit will be arriving soon. This serves as the introduction of the Warthog; Grif suggests calling it a Puma, as he does not think it looks much like a warthog. This episode reveals Sarges disdain for Grif and Simmons...

3
The Rookies 2003-04-27
The Rookies
2003-04-27
At the Red Base, the new recruit, Donut, arrives. With Sarge at Command receiving orders, Grif and Simmons take the opportunity to haze Donut mildly, sending him to the store on a fools errand for nonexistent supplies, such as elbow grease and headlight fluid. Meanwhile, the Blue Team receives two...

4
Head Noob in Charge 2003-04-27
Head Noob in Charge
2003-04-27
Church talks with Tucker about his girlfriend back home. Attempting to join the conversation, Caboose accidentally calls Churchs girlfriend a slut. In response, Church assigns him a bogus flag-guarding duty, instructing him to wait for the General. Still mistaking the Blue base for a store, and not...

5
The Package is in the Open 2003-04-27
The Package is in...
2003-04-27
As Donut, who the Blues assume is Sarge (as both wear red armor), escapes with the flag, Church fires at him with a sniper rifle, missing each time. Church then orders Tucker to cut Donut off by using the teleporter; when Tucker fails to emerge on the other side, Church pursues on foot. Meanwhile,...

6
1.21 Giga-Whats?? 2003-04-27
1.21 Giga-Whats??
2003-04-27
Church catches up to Donut, who he eventually realizes is not Sarge. His armor charred black, Tucker finally emerges from the teleporter, covered in black stuff (Probably soot) and startling the other two. When Donut insists that he is only a private, Tucker concludes that he has traveled back in...

7
Check Out the Treads on that Chick 2003-04-27
Check Out the...
2003-04-27
While Church and Tucker lament their current situation, Caboose hops into the tank. The tanks artificial intelligence (AI) introduces itself as Sheila, and runs him through the tutorial mode. In an attempt to sneak up on the Blues, Grif and Simmons leave the Warthog and unsuccessfully try to go...

8
Dont PH34R the Reaper 2003-04-27
Dont PH34R the...
2003-04-27
Grif and Simmons flee from Caboose and Sheila; Grif abandoning Simmons after he had hatched a plan for a joint escape. Once Caboose manages to activate the auto-fire mechanism, the tank begins to systematically target and destroy everything present. Sheila subsequently hits the Warthog, sending it...

9
After Church 2003-04-27
After Church
2003-04-27
Caboose and Sheila continue to blast away at the Warthog, eventually propelling it onto the top of the Red Base. The Reds suddenly receive a radio call from Sarge, who is returning to the gulch. Learning of the situation, he flies in with air support, bombing Sheila out of action. Initially...

10
Shadow Of His Former Self 2003-04-27
Shadow Of His...
2003-04-27
While Caboose cleans the black stuff off of Tuckers armor, Tucker calls Blue Command for reinforcements. Vic, their contact at Command, informs them that they will be sent a freelancer (mercenary) named Tex. Churchs ghost appears in order to warn the Blue Team about Tex, who once slaughtered his...

11
Knock Knock. Whos There? Pain 2003-04-27
Knock Knock. Whos...
2003-04-27
Lopez repairs the Warthog, while Grif takes the blame for its destruction. Meanwhile, at the Blue Base, Tex uses Caboose for target practice, while ignoring Tuckers attempts at friendly conversation. Tex suddenly decides to leave in order to infiltrate the Red base. During the attack, Tex sticks a...

12
Down, But Not Out 2003-04-27
Down, But Not Out
2003-04-27
Having knocked out Grif and Simmons after attacking Donut, Tex retrieves the Blue flag, but is surprised and captured by Sarge and Lopez. Church appears again at the Blue Base and reveals that Tex is actually female. Back at the Red Base, Donut, badly injured from the grenade explosion, is...

14
Roomier Than It Looks 2003-04-27
Roomier Than It...
2003-04-27
To distract the Reds and deceive them into believing that the Blues have more Special Operations soldiers, Tucker and Caboose go through the teleporter to turn their armor black. When they attack the Red Base, Tuckers bickering with Caboose leads to Church admitting that I cantn believe I died for...

15
How The Other Half Lives 2003-04-27
How The Other Half...
2003-04-27
Now both dead, Sarge and Church meet in the spiritual plane and talk. Sheila also appears here, but is quickly rebuked by Church, who is still angry at her for killing him. Church represents himself to Sarge as an angel and offers to lead him to heaven for a fee. The two swap complaints about their...

16
A Sightly Crueller Cruller 2003-04-27
A Sightly Crueller...
2003-04-27
A healed Donut returns from Red Command with new pink armor, which he insists is lightish red. Sarge pokes fun at Donut by addressing him with feminine titles like Madam,Strawberry Shortcake, Pretty in Pink, Barbie, and Princess Peach. Sarge reveals that Lopez is actually a robot, which Grif has...

17
Points of Origin 2003-04-27
Points of Origin
2003-04-27
Tucker, Caboose, and Church convince Tex to help them, since they rescued her as a favor. Meanwhile, the Red Team is still trying to understand what Lopez is saying. While Tex begins to repair Sheila, Church goes to higher ground to spy on the Reds. Finding his dead body still on the cliff, he...

18
SPF 0 2003-04-27
SPF 0
2003-04-27
The Blues continue to discuss what to do with Churchs corpse. After an interlude demonstrating the Reds boredom, the episode cuts back to Church, who worries that Tex will soon kill the entire Red Team. If successful, she would then leave, probably never to be seen again, before Church could remove...

19
Last One Out, Hit The Lights 2003-09-28
Last One Out, Hit...
2003-09-28
Church possesses Lopezs body to warn the Red Team, but finds that he can only speak Spanish. Caboose radios Church to inform him that Tex is almost ready. To Tuckers surprise, Caboose identifies himself as OMalley and denies that he has ever confirmed his name as Caboose. Tex and Sheila then attack...