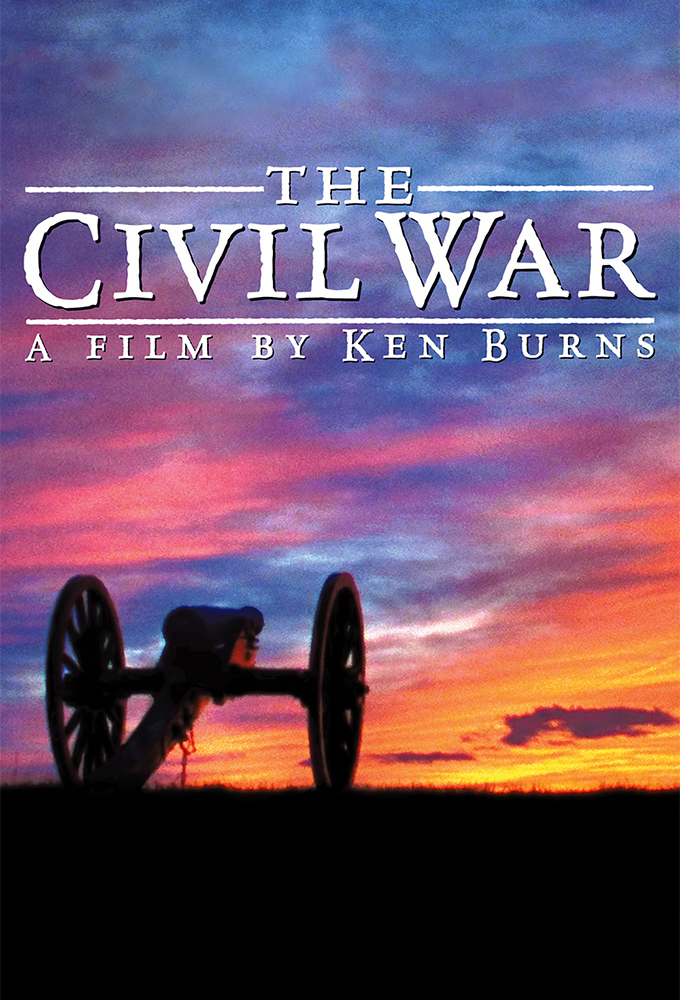 (1990)
Originaltitel: The Civil War
Skapad av:
Release: 1990-09-23
TV-bolag: PBS
Längd per avsnitt: 140 min min
Status: AVSLUTAD
Between 1861 and 1865, Americans made war on each other and killed each other in great numbers - if only to become the kind of country that could no longer conceive of how that was possible. What began as a bitter dispute over Union and States Rights, ended as a struggle over the meaning of freedom in America. (TheTVDB)
Dokumentär Specialintresse

SPECIAL
1
SÄSONG 1

1
The Cause (1861) 1990-09-23
The Cause (1861)
1990-09-23
Beginning with a searing indictment of slavery, this first episode dramatically evokes the causes of the war, from the Cotton Kingdom of the South to the northern abolitionists who opposed it. Here are the burning questions of Union and States rights, John Brown at Harpers Ferry, the election of...
Regisserat av:

2
A Very Bloody Affair (1862) 1990-09-24
A Very Bloody...
1990-09-24
1862 saw the birth of modern warfare and the transformation of Lincolns war to preserve the Union into a war to emancipate the slaves. Episode Two begins with the political infighting that threatened to swamp Lincolns administration and then follows Union General George McClellans ill-fated...
Regisserat av:

3
Forever Free (1862) 1990-09-24
Forever Free (1862)
1990-09-24
This episode charts the dramatic events that led to Lincolns decision to set the slaves free. Convinced by July 1862 that emancipation was now morally and militarily crucial to the future of the Union, Lincoln must wait for a victory to issue his proclamation. But as the year wears on there are no...
Regisserat av:

4
Simply Murder (1863) 1990-09-25
Simply Murder (1863)
1990-09-25
The nightmarish Union disaster at Fredericksburg comes to two climaxes that spring: at Chancellorsville in May, where Lee wins his most brilliant victory but loses Stonewall Jackson; and at Vicksburg, where Grants attempts to take the city by siege are stopped. During the episode we learn of fierce...
Regisserat av:

5
The Universe of Battle (1863) 1990-09-25
The Universe of...
1990-09-25
This episode opens with a dramatic account of the turning point of war: the Battle of Gettysburg, the greatest ever fought in the Western Hemisphere. For three days 150,000 men will fight to the death in the Pennsylvania countryside, culminating in Picketts legendary charge. This extended episode...
Regisserat av:

6
Valley of the Shadow of Death (1864) 1990-09-26
Valley of the...
1990-09-26
Episode six begins with a biographical comparison of Ulysses S. Grant and Robert E. Lee and then chronicles the extraordinary series of battles that pitted the two generals against each other from the wilderness to Petersburg in Virginia. In 30 days, the two armies lose more men than both sides...
Regisserat av:

7
Most Hallowed Ground (1864) 1990-09-26
Most Hallowed...
1990-09-26
The episode begins with the presidential election of 1864 that sets Abraham Lincoln against his old commanding general, George McClellan. The stakes are nothing less than the survival of the Union itself: with Grant and Sherman stalled at Petersburg and Atlanta, opinion in the North has turned...
Regisserat av:

8
War Is All Hell (1865) 1990-09-27
War Is All Hell...
1990-09-27
The episode begins with William Tecumseh Shermans brilliant march to the sea, which brings the war to the heart of Georgia and the Carolinas and spells the end of the Confederacy. In March, following Lincolns second inauguration, first Petersburg and then Richmond finally fall to Grants army. Lees...
Regisserat av:

9
The Better Angels of Our Nature (1865) 1990-09-27
The Better Angels...
1990-09-27
This extraordinary final episode of The Civil War begins in the bittersweet aftermath of Lees surrender and then goes on to narrate the horrendous events of five days later when, on April 14, Lincoln is assassinated. After chronicling Lincolns poignant funeral, the series recounts the final days of...
Regisserat av: