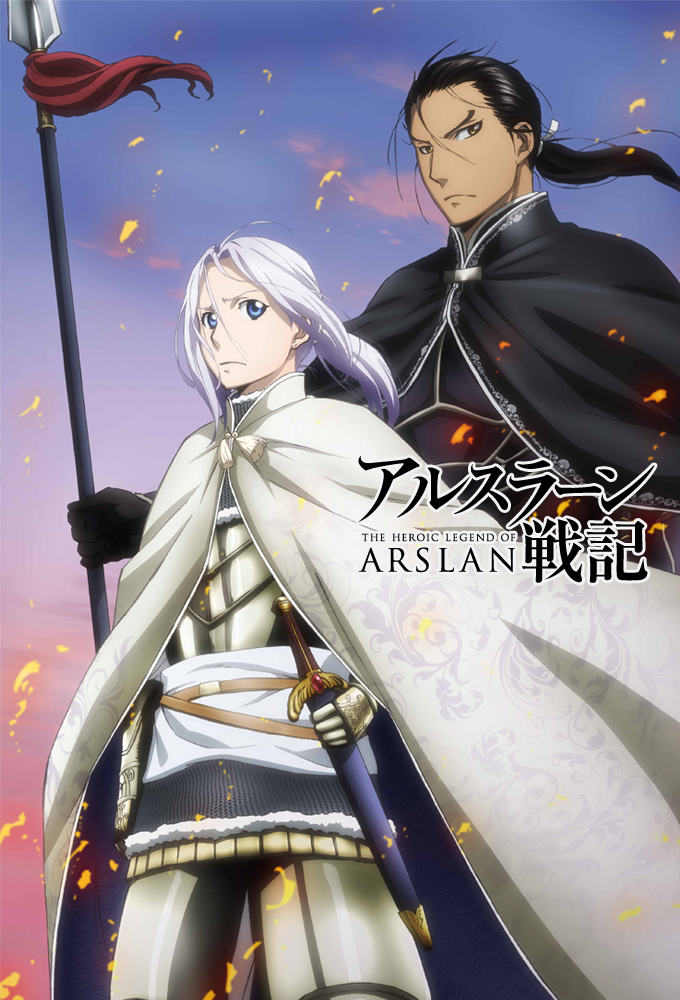 The Heroic Legend of Arslan

(2015)
Originaltitel: Aruslân senki
Skapad av:
Release: 2015-04-05
TV-bolag: MBS
Längd per avsnitt: 25 min min
Status: AVSLUTAD
In the prosperous kingdom of Pars lies the Royal Capital of Ecbatana, a city of splendor and wonder, ruled by the undefeated and fearsome King Andragoras. Arslan is the young and curious prince of Pars who, despite his best efforts, doesnt seem to have what it takes to be a proper king like his father. At the age of 14, Arslan goes to his first battle and loses everything as the blood-soaked mist of war gives way to scorching flames, bringing him to face the demise of his once... (TheTVDB)
Action Animerat Fantasy

SPECIAL
1
2
SÄSONG 1

1
The Glory of Ecbatana 2015-04-05
The Glory of...
2015-04-05
Prince Arslan from the Kingdom of Pars finds himself into a predicament when a young prisoner from the nation of Lusitania holds him hostage in an attempt to escape.
Regisserat av:

2
Age Fourteen, Maiden Battle 2015-04-12
Age Fourteen,...
2015-04-12
Now fourteen years old, Arslan takes part in his first battle against Lusitania, and all odds seem at the Parsian armys favor, until his father, the King Andragoras III, falls victim to treason by Kharlan, one of his generals.
Regisserat av:

4
Pessimistic Strategist 2015-04-26
Pessimistic...
2015-04-26
Arslan and Daryun seek the help of the retired tactician Narsus, but convincing him to join their cause will not be an easy task.
Regisserat av:

5
Flames in Capital (Part 1) 2015-05-03
Flames in Capital...
2015-05-03
While Arslan and Daryun enlist Narsus help, Lusitania begins their siege in the royal capital of Ecbatana. Shapur is tortured by Bodin as an example for the pagans of Pars, but requests to be killed by one of Pars archers. Listening to his request, he is killed by a mysterious man, who is called by...
Regisserat av:

6
Flames in Capital (Part 2) 2015-05-10
Flames in Capital...
2015-05-10
Gieve escapes Ecbatana after having a clash with Silvermask, who makes use of the underground tunnels to strike the palace from within, while the Lusitanian forces, assisted by the slaves, break into the capital and conquer it.
Regisserat av:

7
The Beauties and the Beasts 2015-05-17
The Beauties and...
2015-05-17
As the Lusitanian army plunders the capital, Gieve meets the beautiful priestess Farangies, who is in search for Arslan. Upon knowing that Kharlan intends to raid the nearby villages in order to capture them, Arslan and his companions decide to take the fight to the enemy.
Regisserat av:

8
The Treasonous Hero 2015-05-24
The Treasonous Hero
2015-05-24
Kharlan continues his pursuit of Arslan, unaware that he fell for Narsus scheme and his forces are ambushed in an unfavourable terrain, where Arslans party meets Gieve and Farangis, who join their cause as well. Meanwhile at the capital, Silvermask confronts the captive King Andragoras, revealing...
Regisserat av:

9
Beneath the Mask 2015-05-31
Beneath the Mask
2015-05-31
Daryun and Narsus infiltrate the capital in search for information, coming across Silvermask in the occasion, while Arslan has another encounter with the runaway prisoner he met years before.
Regisserat av:

12
A Knights Loyalty 2015-06-21
A Knights Loyalty
2015-06-21
Silvermask slaughters a band of thieves and when the leaders daughter is about to be killed as well, Narsus appears to rescue her. Meanwhile, the rest of Arslans party regroups and fights Xandes forces, including the mysterious sorcerer that aids him.
Regisserat av:

13
Two Princes 2015-06-28
Two Princes
2015-06-28
Arslan and his companions reach Peshawar in safety, but there is some discord among the generals regarding the princes request for aid. Uncertain if he is up to the task of liberating the kingdom, Arslan is attacked by Silvermask.
Regisserat av:

14
The Foreign Prince 2015-07-12
The Foreign Prince
2015-07-12
Taking advantage of the crisis in Pars, Prince Rajendra from the Kingdom of Shindra commands an army to take over Peshawar, just to be defeated and captured by Arslans subjects thanks to another of Narsus stratagems. Knowing that Rajendra is contending for the throne of his own country with his...
Regisserat av:

15
The Black Leopard of Sindhura 2015-07-19
The Black Leopard...
2015-07-19
Arslan and his subjects assist Rajendras campaign to overthrow his brother and Jaswant, a Shindran guide is introduced to them. However, Jaswant is not who he claims to be, but it does not take long for the party to realize that for their own advantage.
Regisserat av:

16
Elegy for the Setting Sun 2015-07-26
Elegy for the...
2015-07-26
Gadevi commands his army to bring down Arslan and Rajendras alliance. Believing that he got the Parsian forces isolated, Gadevi sends his main force against Rajendras, gaining the upper hand, until the Parsians, having outsmarted their enemies once again, join the battle as well to turn the tables...
Regisserat av:

17
The Duel Before the Gods 2015-08-02
The Duel Before the...
2015-08-02
A duel is called by the king to settle the dispute between the two princes. Daryun, chosen as Rajendras proxy, battles Bahadur, a massive and vicious warrior released by Gadevi from prison to be his representative, and wins. However, Gadevi, not pleased with the result, turns against his own father...
Regisserat av:

18
Cross the River Again 2015-08-09
Cross the River...
2015-08-09
Following his fathers death and his brothers execution, Rajendra is crowned the king of Shindra. Arslan and his company then return home with their army, but Rajendra decides to repay all the help he received from them with one last act of treason.
Regisserat av:

19
The End of Winter 2015-08-16
The End of Winter
2015-08-16
Now with Jaswant in his party, Arslan returns to Peshawar, while back at Ecbatana, Silvermask gathers allies and manpower seeking to one day liberating Pars and taking the throne for himself.
Regisserat av:

20
The True Face of a Knight 2015-08-23
The True Face of a...
2015-08-23
The forces loyal to Arslan gather in Peshawar in preparation for the battle to retake the capital. However, with the issues regarding Silvermasks past and his own birth in his mind, Arslans resolve falters, until he meets a young girl unaware that she is actually Etoile, the same Lusitanian captive...
Regisserat av:

22
The Night Before the Attack 2015-09-06
The Night Before...
2015-09-06
As Hilmes is set to confront Arslan on the Battlefield, the latter steels his resolve and his soldiers for the impending battle.
Regisserat av:

24
The Decisive Battle 2015-09-20
The Decisive Battle
2015-09-20
Arslan is escorted by his subjects deep inside of the Keep of Saint-Emmanuel where he confronts Silvermask in an attempt to call his cousin to reason. However, Hilmes refuses to listen and challenges Daryun to a duel.
Regisserat av:

25
The Highway of Blood and Sweat 2015-09-27
The Highway of...
2015-09-27
The Keep of Saint-Emmanuel is captured by the Parsian army, and by Arslans request, the Lusitanian survivors are taken with them as they keep marching towards Ecbatana, including Etoile, who starts to act more friendly with him. Meanwhile, Silvermask returns to the capital and forms a treacherous...
Regisserat av: