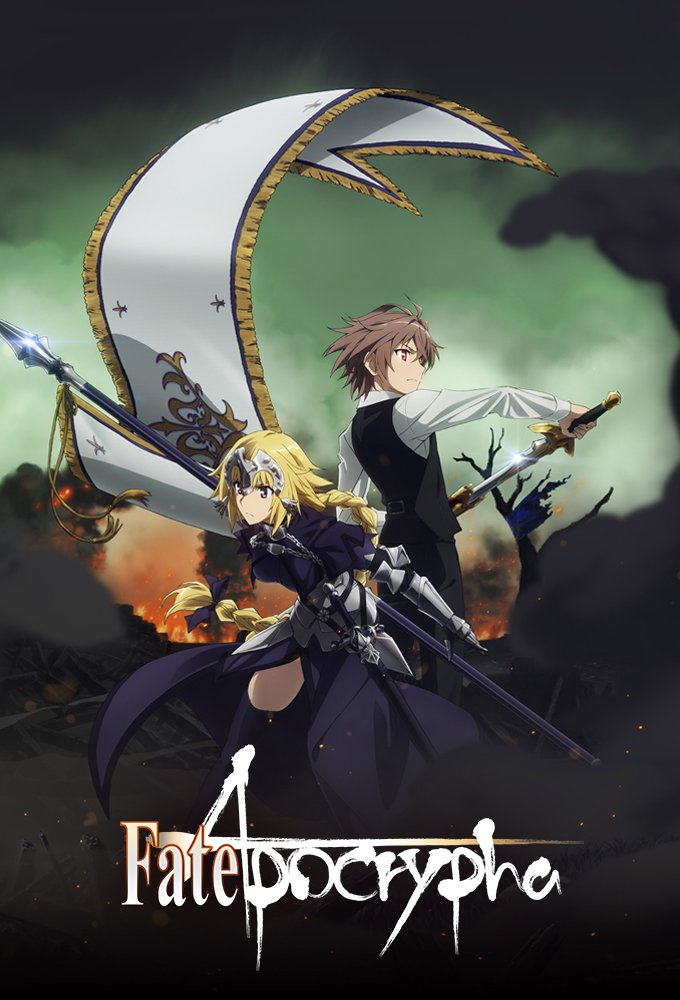 (2017)
Originaltitel: Feito/Apokurifa
Skapad av:
Release: 2017-07-02
TV-bolag: Tokyo MX
Längd per avsnitt: 25 min min
Status: AVSLUTAD
The setting is a parallel world to Fate/stay night where the Greater Grail mysteriously disappeared from Fuyuki after the Third Holy Grail War. After many years of silence, around the same time as the Fifth Holy Grail War would have happened, the Yggdmillennia, a family of magi, openly declares their secession from the Mages Association, and that they are in possession of the Grail. The Association dispatches fifty magi to retrieve it, and all but one are instantly slaughtered by a... (TheTVDB)
Action Animerat Drama Fantasy

SPECIAL
1
SÄSONG 1

1
Apocrypha: The Great Holy Grail War 2017-07-02
Apocrypha: The...
2017-07-02
The freelance necromancer Kairi Sisigou is called to the Mage’s Association in London for a special request. There, he is asked to participate in the Great Holy Grail War to recover the stolen Greater Grail system of Fuyuki. In this great war, seven masters and servants of the Red faction will...
Regisserat av:

2
The Saint Departs 2017-07-09
The Saint Departs
2017-07-09
A girl lost in thought on a bus ride in the night – Ruler. Unusually summoned through the union of her spirit and a French girl, she feels something is amiss in the war to come. To fulfill her role as Ruler over this war, she departs for Trifas.
Regisserat av:

3
The First Steps of Fate 2017-07-16
The First Steps of...
2017-07-16
A homunculus boy awakens in his incubation tank. Assaulted with visions of the fate of his comrades, he manages to escape confinement. Unfortunately, he lacks the strength to make it to the outside world and is instead found collapsed on the ground by Rider of Black.
Regisserat av:

4
Lifes Cost, Deaths Redemption 2017-07-23
Lifes Cost, Deaths...
2017-07-23
A rampaging Berserker of Red is rapidly approaching the Yggdmillennia citadel, prompting them to respond. Meanwhile, the homunculus boy ponders the meaning of his existence and the conversation he had with Archer of Black.
Regisserat av:

5
Voice From Above 2017-07-30
Voice From Above
2017-07-30
Saber of Black devotes his heart to the boy who desired freedom. In his last moments, Ruler promises that she will grant the boy that freedom and insure that Saber’s wish will come true.
Regisserat av:

6
The Knight of Rebellion 2017-08-06
The Knight of...
2017-08-06
Kairi Sisigou receives a message from the Mage’s Association that a string of violent murders is taking place in Sighișoara and is probably related to the yet unaccounted for Assassin of Black. He is tasked with bringing the out of control master and servant to justice for failing to follow the...
Regisserat av:

8
The War Begins 2017-08-20
The War Begins
2017-08-20
Assassin of Red’s Noble Phantasm, the Hanging Gardens of Babylon, is activated as the Red faction prepares its all-out assault on the Black faction’s citadel. The Great Holy Grail War enters a new violent phase while Ruler and Sieg make their way to the battlefield.
Regisserat av:

10
Like Scattered Petals 2017-09-03
Like Scattered...
2017-09-03
Sieg comes to the rescue of Rider of Black and confronts Saber of Red. Berserker of Black also arrives and attacks, while her master Caules Yggdmillenia struggles with the choices he has in the form of the Command Spells.
Regisserat av:

12
The Saints Triumphant Return 2017-09-17
The Saints...
2017-09-17
Assassin of Reds Hanging Gardens of Babylon arrive over the Yggdmillennia Citadel and excavate the Greater Grail that was buried underground. The Black faction boards the flying fortress to fight off the invading Red faction, but Lancer of Blacks territorial advantage wanes...
Regisserat av:

13
The Last Master 2017-10-01
The Last Master
2017-10-01
In the Hanging Gardens, Shirou lays bare his wish for the Holy Grail, while on the ground Rider of Black is forced to act against his own by his master Celenike Yggdmillennia.
Regisserat av:

14
Prayer of Salvation 2017-10-08
Prayer of Salvation
2017-10-08
Sieg works with the other homunculus to patch up the wounded when a very angry Ruler appears. Meanwhile, the remaining Yggdmillennia masters discuss what to do following Caster of Blacks betrayal.
Regisserat av:

16
Jack the Ripper 2017-10-22
Jack the Ripper
2017-10-22
Assassin of Black moves closer to Trifas on their killing spree, forcing the remaining members of the Yggdmillenia clan to act against them.
Regisserat av:

17
Träumerei 2017-10-29
Träumerei
2017-10-29
Ruler takes Sieg out on a date in Trifas under the guise of luring out Assassin of Black but ends up enjoying this reverie more than she expected.
Regisserat av:

18
From Hell 2017-11-05
From Hell
2017-11-05
With her Command Spells, the master of Assassin of Black unleashes a vision of Hell within the mist. To those caught in it, the tormenting trap is all but inescapable.
Regisserat av:

21
Scorpio Shot 2017-12-03
Scorpio Shot
2017-12-03
The Great Holy Grail War resumes in midair on the Black factions approach of the Hanging Gardens, with the servants of Red choosing their opponents to fulfill promises or curses made on the battlefield.

22
Reunion and Separation 2017-12-10
Reunion and...
2017-12-10
The battle between fated adversaries intensifies, with Ruler facing off against Archer of Red and Saber of Black appearing in front of Lancer of Red.

25
Apocrypha 2017-12-31
Apocrypha
2017-12-31
A boy once stood opposed to Shirous wish, wielding a sword to fulfill his own. Thus the wishes intertwined into Apocrypha.