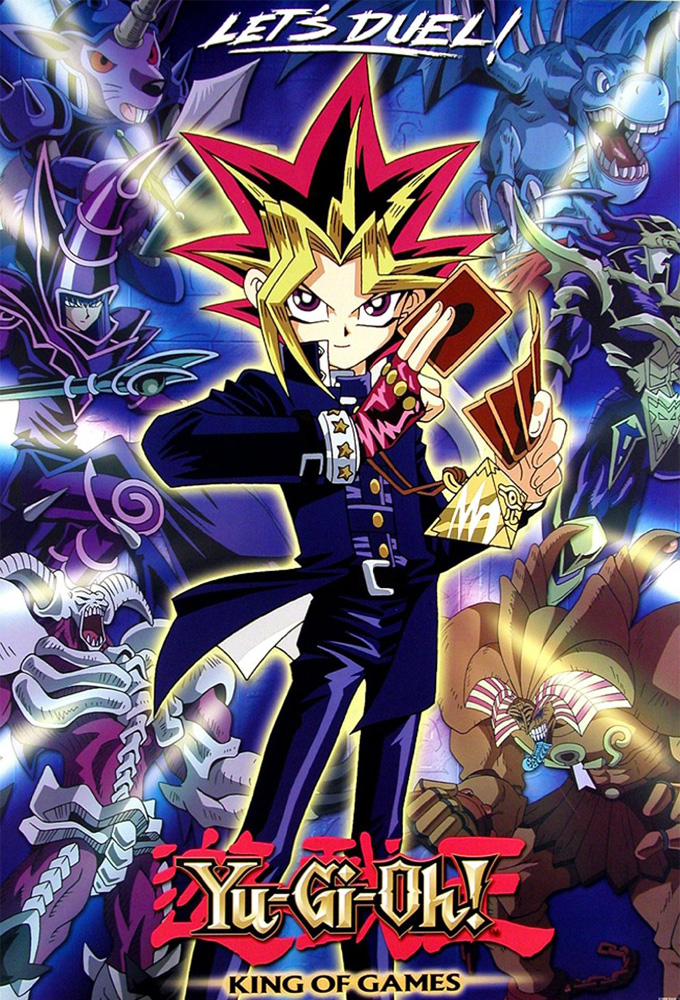 (1998)
Originaltitel: Yu-Gi-Oh!
Skapad av:
Release: 1998-04-04
TV-bolag: TV Asahi
Längd per avsnitt: 30 min min
Status: AVSLUTAD
A young boy named Yugi Moto solves an Ancient Egyptian Puzzle and brings forth a dark and powerful alter ego. Whenever he and his friends are threatened by evil, this alter ego breaks out of the confines of the Millenium Puzzle and challenges wrongdoers to the Shadow Games: Life or Death situations that test the true nature of human beings. Those that lose or cheat suffer serious penalties that result in losing their sanity or even their lives. Along with his friends Joey, Tristan,... (TheTVDB)
Action Äventyr Animerat

2
The Devil Gamer - The Trap of Hell 1998-04-11
The Devil Gamer -...
1998-04-11
A criminal escapes from jail and takes Anzu as a prisoner. Yugi shows his other self by using the Millennium Puzzle as he challenges the criminal to a Shadow Game in order to get Anzu back.

3
Clash! The Strongest Monster 1998-04-18
Clash! The...
1998-04-18
Seto Kaiba is a new student in Yugis class and he is also a Duel Monsters (a card game) expert. After he steals the Blue-Eyes White Dragon from Yugis grandfather, Yugi challenges him to a duel where the cards are real. The game remains a tie and Yugi gets his grandpas card back.

4
Theft! The Super Legendary Rare Watch 1998-04-25
Theft! The Super...
1998-04-25
Honda buys a watch for Miho and he gets lucky because he gets the last one. When a guy that collects watches sees that there arent anymore, he steals the watch from Miho only to be stopped by Dark Yugi right in time. Yugi challenges him to a Shadow Game for the watch as the watch collector loses...

5
Now Revealed!! Yugis Secret 1998-05-02
Now Revealed!!...
1998-05-02
A man from ancient Egyptian comes at the museum where he sees Yugi with the Millennium Puzzle. He travels in Yugis mind to see if the puzzle really belongs to Yugi. In there, Dark Yugi challenges him to a game where the man from Egypt must find the real door which has the Millennium Puzzle in it....

7
The Underhanded Digital Pet Rebellion 1998-05-16
The Underhanded...
1998-05-16
The popularity of Digital Pets leads to a contest, and Honda trains Mihos pet, so they can take the paid trip. Meanwhile, Yugi is worried for his friend Haiyama, who seems to be pressured into some shady business by the bullying Kujirada. But all is not what it seems...

10
The Pressing Beautiful Teacher - The... 1998-06-06
The Pressing...
1998-06-06
Anzu clashes with the beautiful but sadistically strict Ms. Chrono, and organizes a petition to change the school rules. But Chronos underhanded counterattack ruins the petition--until Dark Yugi steps in.

13
Target the Schoolgirls - The Fangs of... 1998-06-27
Target the...
1998-06-27
Fraudulent psychic Kokurano has his eyes on Anzu. Though Anzu doesent believe his predictions at first, her desire to see her mysterious savior (Dark Yugi) leads her right into Kokuranos grasp.

14
In a Bomb Game - The Worst Date 1998-07-04
In a Bomb Game -...
1998-07-04
When she realizes that Yugi is her mysterious crush, Anzu invites him on a date to an amusement park, intending to put herself in danger to see Dark Yugi. But she finds herself in real danger when a mad bomber challenges Dark Yugi to a twisted game of balloons and explosions.

16
Turnabout by a Hairs Breadth - The... 1998-07-18
Turnabout by a...
1998-07-18
Jonouchi has a crush on Miyuki, the nurse taking care of his sister Shizuka. But when a corrupt doctor fires her, Jonouchi cant expose him, or Shizuka will be kicked out of the hospital.

17
A Last Minute Match - The Model that... 1998-07-25
A Last Minute Match...
1998-07-25
Kaibas third Game Master, famous model Aileen Rao, challenges Dark Yugi to a game of Rijinhai. Irene prides herself on taking away the most important things from the ones she defeats--if Yugi loses, he loses Anzu...

18
In a Forbidden Game - Dont Make a Move 1998-08-01
In a Forbidden Game...
1998-08-01
Yugi befriends bullied youth Imori, and the two discover the forbidden game Dragon Block. The evil game overcomes Imori and he challenges Dark Yugi to a game with his soul itself on the line.

19
The Great Melee!! A Popularity Contest 1998-08-08
The Great Melee!! A...
1998-08-08
With Hondas support, Miho enters a popularity contest against arrogant school beauty Kaoruko Himekoji. Soon Kaoruko resorts to cheating, but when she hurts Miho, she incurs the wrath of Dark Yugi. (Bakura makes a cameo in this episode)

24
Now! The Time of Decision - The Miracle... 1998-09-19
Now! The Time of...
1998-09-19
With his grandpa and friends at stake, Yugi duels Kaiba, and his three Blue-Eyes White Dragons, while Jonouchi and Miho battle Ryuchi and Aileen. With his friends support, Yugi pulls off the unbeatable combo--Exodia.