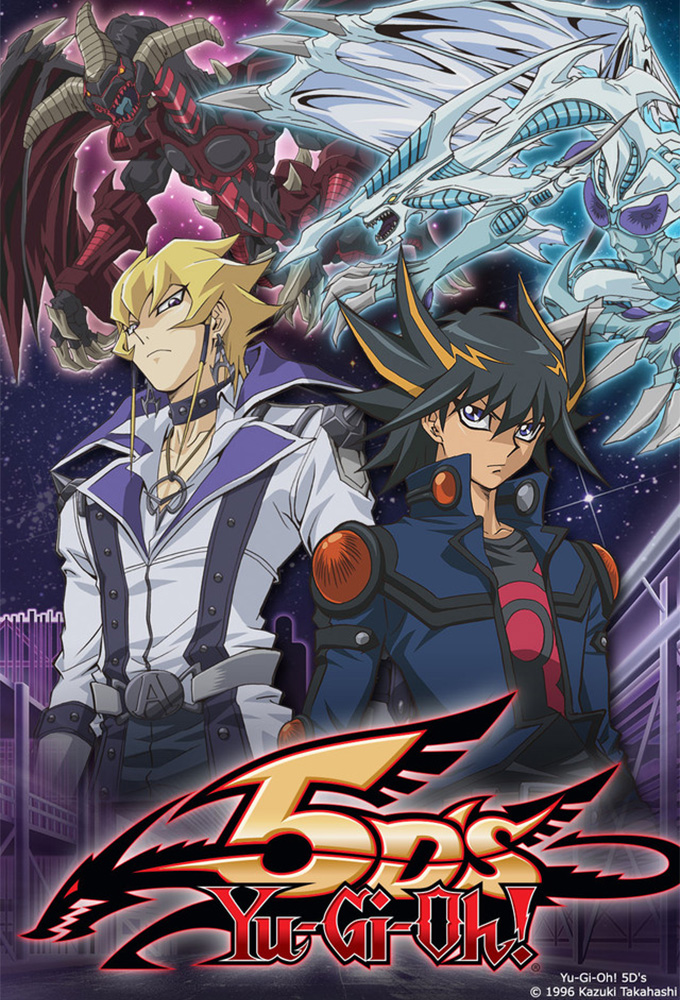 (2008)
Originaltitel: Yu-Gi-Oh! 5D's
Skapad av:
Release: 2008-04-02
TV-bolag: The CW
Längd per avsnitt: 25 min min
Status: AVSLUTAD
Many years in the future after the exploits of Yugi Mutou, Domino City has become a shadow of its former self: Neo Domino City. There lies a strong divide between the rich and the poor, and bridging that gap proves to be difficult. Neo Domino seems fit to entertain itself with a wild new event called Riding Duels, the newest form of playing the ever popular Duel Monsters card game. Enter Yusei Fudou, a young man who lives on the edge of the law, making his own rules. His desire to... (TheTVDB)
Action Äventyr Animerat Fantasy

SPECIAL
1
2
3
4
SÄSONG 1

1
On Your Mark, Get Set, Duel! 2008-04-02
On Your Mark, Get...
2008-04-02
This episode introduces the basic aspects and rules of the Turbo Duel, Speed World and the new Synchro and Tuner monsters. Rally gives Yusei a stolen chip to upgrade his Duel Runner, but they are hunted down by Security forces. Yusei draws their pursuers away, and is dragged into a Turbo Duel...

2
Creepy Crawlies 2008-04-09
Creepy Crawlies
2008-04-09
Yusei reflects on his past battle with Jack, vowing to win back his Stardust Dragon card which Jack took from him. Later, Tank, Nervin, and Blitz are challenged by a group of thugs, led by a person named Uryu. Yusei steps in to help his friends out, and ends up in a duel against Uryu with his Duel...

3
Pipe Dreams 2008-04-16
Pipe Dreams
2008-04-16
Yusei begins his ride to New Domino City to face Jack. On the way, Trudge forces him into another Turbo Duel. With only three minutes left to make it out of the pipeline, and Trudges Gate Blocker preventing him from gaining Speed Counters, Yusei seems to be getting desperate - until he pulls out a...

4
A Blast from the Past (1) 2008-04-23
A Blast from the...
2008-04-23
Yusei, intending to win back his Stardust Dragon, meets up with Jack and challenges him to a Turbo Duel. The battle begins in the now deserted Duel Stadium. Yusei finds himself up against not only the fearsome Red Dragon Archfiend, but also his own Stardust Dragon which Jack placed in his deck.

5
A Blast from the Past (2) 2008-04-30
A Blast from the...
2008-04-30
Yusei and Jacks battle continues, with Yusei finally regaining control of Stardust Dragon. Both Yusei and Jacks arms burn as Stardust and Red Dragon Archfiend clash, and both their dragon-shaped birthmarks begin glowing. A third Dragon appears in the sky, blazing red. The duel ends with no victor...

6
The Facility (1) 2008-05-07
The Facility (1)
2008-05-07
Yusei is arrested and sent to a detention center, where he meets an old man named Yanagi, who duels using what he calls his Hidden Treasure deck. Yanagi faces off against another prisoner, Bolt Tanner - and is shortly revealed to be a very poor duelist. Although lacking skills, he still cares...

7
The Facility (2) 2008-05-14
The Facility (2)
2008-05-14
Yusei has had enough of hearing Tanner making fun of Yanagis cards and dueling skills, so he takes up Yanagis deck and challenges Tanner to a duel, much to everyones surprise, since Yusei is not dueling with his usual cards. Yusei wants to teach Tanner that every deck has a winning strategy,...

8
Fire It Up! 2008-05-21
Fire It Up!
2008-05-21
Yusei is interrogated for information on his Dragon Mark, and Goodwin comes to the detention center to speak with him further. Yanagi tells Yusei what he knows about the Signers and the five dragons, and suspects that Yuseis Stardust Dragon may be one of the five. Meanwhile Jack duels Hunter again,...

9
The Lockdown Duel (1) 2008-05-28
The Lockdown Duel...
2008-05-28
Yusei is transferred to a different cell, away from Yanagi. His new cellmate, Alex, plans to escape and offers to take Yusei with him, but he refuses to leave without Yanagi and Tanner. Meanwhile, Armstrong has been harassing Tanner, and Yusei ends up in a duel against him, using a deck built with...

10
The Lockdown Duel (2) 2008-06-04
The Lockdown Duel...
2008-06-04
Yusei is caught in Armstrongs trap - not only is he forced to discard ten cards each turn, each Life Point lost also delivers a painful electric shock. Armstrong has disabled the electric current to his own Duel Disk, and thus does not feel any pain, until Alex breaks into the control room. He...

11
The Take Back (1) 2008-06-11
The Take Back (1)
2008-06-11
Although he is now out of the detention center, Yusei has noticed that he is being followed by Goodwins agents. Luckily, he is taken by a former duelist named Blister, the man who Tanner told him could help get his Duel Runner and dueling deck back. After discovering Blisters past, Yusei...

12
The Take Back (2) 2008-06-18
The Take Back (2)
2008-06-18
Yusei continues to avoid Trudges brutal direct attacks as he attempts to escape with Blisers help, but things only get harder from there. Despite the danger, Yusei resolves to restore Blisters faith in bonds with other people. When Trudge brings out Goyo Guardian, Yusei tunes four of his weak...

15
Welcome to the Fortune Cup 2008-07-09
Welcome to the...
2008-07-09
The Fortune Cup has officially begun and the first duel pits Krieger against Leo, who is disguised as his sister Luna, as she did not wish to participate. Kriegers aircraft machine monsters are giving Leos Morphtronic monsters a hard time. Meanwhile, Zigzix, Goodwins scientist, puts his latest...

16
Battle with the Black Rose 2008-07-16
Battle with the...
2008-07-16
The next duel in the Fortune Cup pits Gill de Randsborg vs. Akiza. Randsborg has learned from Goodwin and Lazar that Akiza is the Black Rose. At first, his Masked Knight leveled monsters seem to give him a clear advantage, until Akiza lets everyone in the stadium witness the dangers of her plant...

17
Surprise, Surprise 2008-07-23
Surprise, Surprise
2008-07-23
Next up in the Fortune Cup is a riding duel between Yusei and a mysterious caped duelist called Shira, but to Yuseis and Jacks surprise, the challenger is actually Hunter Pace who took the real Shiras place and disguise shortly before the duel starts. Yusei must now face Paces deck filled with...

18
Return to the Spirit World (1) 2008-07-30
Return to the...
2008-07-30
The first round of the Fortune Cup is over, but Rex Goodwin is holding a consolation match, which opposes Professor Frank (Known simply as The Professor in the English version) versus the real Luna, much to Leos disappointment. Not only Luna is reluctant to duel, but the duel itself is planned to...

19
Return to the Spirit World (2) 2008-08-06
Return to the...
2008-08-06
Luna engages in her duel with Professor Frank when she hears a mysterious voice saying: You said...youd protect the world of Duel Monsters spirits. Then, the voice takes shape in the form of Ancient Fairy Dragon. Now, Luna must take all her courage and skill at hand to defeat Professor Franks...

20
Second Round Showdown (1) 2008-08-13
Second Round...
2008-08-13
The first day of the Fortune Cup comes to a close. The audience attention is cast to an image of Krieger, who shall face Yusei tomorrow. As Tanner says that he wonders what kind of Duel Runner Krieger uses, something comes to Leos mind, causing him to run off.

21
Second Round Showdown (2) 2008-08-20
Second Round...
2008-08-20
Krieger successfully summons Flying Fortress SKY FIRE and uses its effect to prevent Yusei to play his cards right. What Yusei doesnt know is that Krieger holds Goodwin responsible for the destruction of his home village.

22
Dueling Minds 2008-08-27
Dueling Minds
2008-08-27
The second round of the finals pits Akiza against Commander Koda. Koda has been ordered by Goodwin to expose Akiza as a signer, which didnt work on Akizas last duel. Furthermore, Koda can expose his opponents past to disable them. He doesnt take long to expose Akizas troublesome reputation as the...

23
Duel of the Dragons (1) 2008-09-03
Duel of the Dragons...
2008-09-03
Before the final rounds of the Fortune Cup commences, Yusei confronts and questions Akiza within a inner passage of the Dueling Stadium of why does she calls the Mark of the Dragon a Wretched Mark. To which angrily responds that she hates and detests the person who carries a birthmark. Furthermore...

24
Duel of the Dragons (2) 2008-09-10
Duel of the Dragons...
2008-09-10
The duel between Yusei and Akiza continues, and Akiza quickly gains the upper hand. Yusei, from his part, manages to put a good defense against Akizas plant-type monsters, but also notices that Akiza takes a guiltiest pleasure at attacking him mercilessly.

25
The Fortune Cup Finale (1) 2008-09-17
The Fortune Cup...
2008-09-17
Yusei wins his match against Akiza, but feels reluncant about it since he couldnt help her as much as he would have wished. He then rushes to Goodwins tower in order to rescue his friends, but what he finds is Jack along Goodwin, and he explains how his rivalry with Yusei all began. Shortly after,...