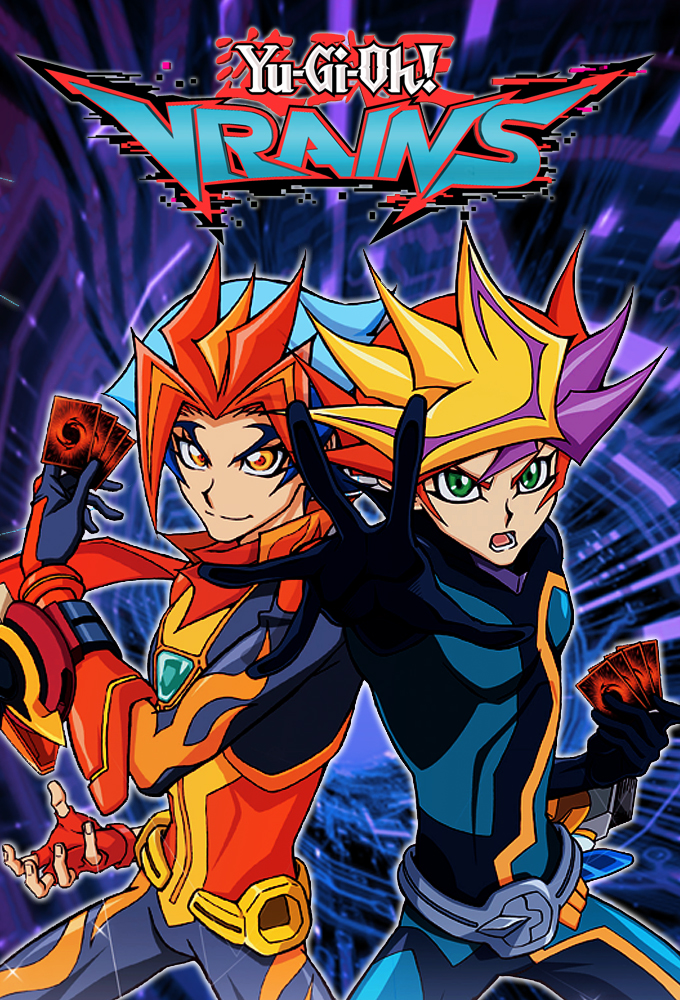 (2017)
Originaltitel: Yu-Gi-Oh! VRAINS
Skapad av:
Release: 2017-05-10
TV-bolag: TV Tokyo
Längd per avsnitt: 25 min min
Status: AVSLUTAD
In Den City, SOL Technologies created a VR space called LINK VRAINS where duelists can use avatars to duel. Yusaku Fujiki, also known as Playmaker, is a first year high school student who fights the Knights of Hanoi, a group of hackers, as he tries to find out the truth about the past. The Knights of Hanoi as well as SOL Technologies are seeking a mysterious AI program that Yusaku manages to capture. (TheTVDB)
Action Äventyr Animerat Fantasy Science-Fiction

1
2
3
SÄSONG 1

1
My Name Is Playmaker 2017-05-10
My Name Is Playmaker
2017-05-10
Den City is the city where the newest network technology was developed. There we have the LINK VRAINS, a cyberspace managed by the SOL Technologies Inc. where people Duel night and day. Our protagonist, Yusaku Fujiki, is a cool student with excellent observation abilities. In order to defeat a...

2
Seize the Wind! Storm Access 2017-05-17
Seize the Wind!...
2017-05-17
Yusaku managed to capture the Mysterious Lifeform as he chases after the Knights of Hanoi. In order to defeat them, he logs into the VR Space network, LINK VRAINS, as Playmaker. He commenced a Duel, holding the lifeform as a hostage. However, the lifeform predicted that Yusaku cant win with his...

3
First Contact 2017-05-24
First Contact
2017-05-24
Yusaku begins to examine the information hidden in the Mysterious Lifeform. Meanwhile, after his Duel against the Knights in the network, he became famous as the hero who saved LINK VRAINS. Learning that the lifeform is with Playmaker, SOL Technology sets up an operation to capture it...

5
The Three Count Rings 2017-06-07
The Three Count...
2017-06-07
GO carries out his Duel in a manner similar to Pro-Wrestling, using Dueling as a means to entertain the audience. Playmaker seems to be interested in this playstyle, which is different from his calm and calculated playstyle. As if acknowledging GO Onizuka’s Dueling, Playmaker Summons Decode...

7
Hanois Angel 2017-06-21
Hanois Angel
2017-06-21
Feeling that the Knights of Hanoi are behind Blue Angel, Yusaku decides to Duel her to find out her real intentions. However, Playmaker is gradually driven into a corner by Blue Angel’s tactics, which focus on dealing effect damage. Blue Angel’s strong desire to be recognized by her brother has...

8
The One Who Commands the Wind 2017-07-05
The One Who...
2017-07-05
Due to Hanois program, Aoi Zaizen is now in a comatose state. Feeling responsible for dragging her into his battle against Hanoi, Yusaku tries to investigate the cause of this together with Kusanagi. However, Blue Angel, who is supposed to be in a coma, then appears on the citys monitors, and...

9
Enemy I Was Seeking 2017-07-12
Enemy I Was Seeking
2017-07-12
In order to obtain the program that removes the virus that infected Aoi, Yusaku commences a Duel against Revolver, with the AI, who is also known as Ai, as a wager. Using the Link Monsters he obtained in his previous Duels, Playmaker was able to destroy Revolver’s Cracking Dragon. However, the...

11
Roar of the Magazine Varreload 2017-07-26
Roar of the...
2017-07-26
Playmaker is shocked by the truth that Revolver revealed, and he collapses after taking a powerful attack from Revolver’s ace monster, Borreload Dragon. As his consciousness fades, a mysterious voice echoes in his mind and awakens him... Playmaker then gets back up, his eyes burning with...

12
Impregnable Defending Dragon Firewall 2017-08-02
Impregnable...
2017-08-02
Accompanied by Firewall Dragon, Playmaker musters every last ounce of his strength to fight against Revolver’s Borreload Dragon. Playmaker vows to get revenge for the incident that happened in the past, while Revolver plots to eradicate Ai. As the two’s beliefs clash, their two dragons also...

13
Fierce Battles Record 2017-08-09
Fierce Battles...
2017-08-09
After his fierce battle against Revolver, Yusaku analyzes the information about Ignis together with Kusanagi. Meanwhile, Ghost Girl, the mysterious Duelist who witnessed Playmaker, receives an interview in LINK VRAINS. She starts talking about the Knights of Hanoi’s attacks, as well as...

14
Ghost Girls Invitation 2017-08-16
Ghost Girls...
2017-08-16
Interested in the incident that happened ten years ago, Ghost Girl challenged Playmaker to a Duel, with Ai as a wager. Learning that he will be able to obtain the program that allows him to infiltrate SOL Technologies Data Bank if he wins, Yusaku heads to LINK VRAINS. Fully aware of the risks,...

15
Altergeist that Hides in the Darkness 2017-08-23
Altergeist that...
2017-08-23
Ghost Girl carries out an unpredictable Duel with her phantasmagorical tactics. Meanwhile, Playmaker calmly analyzes Ghost Girls moves and looks for a chance to use Storm Access. Thus, a battle of wits unfolds between the two as they try to outsmart one other. Who will ultimately triumph?!

16
Infiltrate SOLs Cyber Fortress 2017-08-30
Infiltrate SOLs...
2017-08-30
In order to search for the truth about the incident ten years ago, Playmaker hacked into SOLs mother computer, and heads for the data bank that lies deep within its system. However, standing in his way is a Dueling AI program! Can Playmaker get past this new threat and seize the truth?!

17
Flawless AI Duelist 2017-09-06
Flawless AI Duelist
2017-09-06
Blue Angel rushes to Playmaker, who is having troubles against the AI programs. Thanks to her, Playmaker is able to get out of a pinch and reach the inner depths of the mother computer. However, when Playmaker reaches the data bank, a certain character stands in his way...

19
The Incident Buried in the Darkness 2017-09-20
The Incident Buried...
2017-09-20
Akira skillfully uses his Tindangle Deck to fight against Playmaker. Playmaker also fights back with his Cyberses. As their fierce battle rages on, Akira starts talking about the incident ten years ago. At last, Yusakus past is finally unveiled...

20
Unyielding Justice 2017-09-27
Unyielding Justice
2017-09-27
Akira manages to drive Playmaker into a corner. However, Playmaker fights back with everything he got, performing multiple Link Summons in a row in order to turn the battle around. Akira and Playmaker then proceed to duke it out with their ace monsters.

21
Embers of a New Battle 2017-10-04
Embers of a New...
2017-10-04
Yusaku and Kusanagi analyze SOL Technologies data, and discover some new information about the incident ten years ago. Meanwhile, at Yusakus house, Ai and Roboppy are secretly plotting something...

22
Blackened Sun 2017-10-11
Blackened Sun
2017-10-11
Yusaku and co. investigate a mysterious phenomenon known as Another, where the victims cant log out of LINK VRAINS and stay unconscious in the real world. They successfully identify who the next victim might be through the data they collected. In order to prevent more damage, Yusaku and co. decide...

23
Genomes Giant 2017-10-18
Genomes Giant
2017-10-18
In order to rescue a boy who fell victim to the Another phenomenon, Go Onizuka confronted the criminal who called himself Dr. Genome. Determined to win no matter what, Go casts away his entertainment style and Duels like a heel.

24
Dark Masks Burden of Fate 2017-10-25
Dark Masks Burden...
2017-10-25
Dr. Genome uses his Helixx Deck to turn the Gouki monsters powerful attacks against themselves, putting Go Onizuka into a pinch. At the same time, the other members of the Knights of Hanoi also show up in LINK VRAINS and indiscriminately attack the citizens...

25
Virus Deck Operation 2017-11-01
Virus Deck Operation
2017-11-01
Aoi is aware of the battle between the Knights of Hanoi and Playmakers group, but she doesnt know whether she should fight as Blue Angel or keep her promise to Akira and not go into LINK VRAINS. However, Emma then appears before her. What is Aois answer after her meeting with Emma?

27
Naoki Shima the Fighter 2017-11-15
Naoki Shima the...
2017-11-15
As the Another phenomenon begins to affect the real world, everyone begins to panic, and LINK VRAINS is put on high alert. Due to something, Naoki Shima decides to fight against the Knights of Hanoi...

28
Final Commander of the Three Knights 2017-11-22
Final Commander of...
2017-11-22
Faust, the mastermind behind Another, takes Naoki hostage and uses him to draw out Playmaker. Using electric worm monsters known as Motor Worms, he seals away Playmakers Link Summon. Playmaker then flies into the Data Storm and uses Storm Access, hoping to turn things around...

31
The Final Trigger 2017-12-13
The Final Trigger
2017-12-13
Ghost Girl ran into Revolver while she was investigating LINK VRAINS underground. The two of them then start a Duel. Ghost Girl manages to take out Topologic Bomber Dragon and Link Summons her trump card. She then delivers the finishing blow against Revolver, but...

32
Tower of Hanoi 2017-12-20
Tower of Hanoi
2017-12-20
An ominous tower has appeared in LINK VRAINS. An incident then occurs, where many Duelists get converted to data. Learning this, Playmaker heads to LINK VRAINS, bringing the info Ghost Girl entrusted to him with him. He meets up with Go Onizuka and Blue Angel, and exchanges information with them....

33
Angel with Blue Tears 2017-12-27
Angel with Blue...
2017-12-27
Blue Angel launches a series of attacks against Spectre with her Trickstars, but her attacks didnt work, since Spectre is protected by his Sunavalon. Blue Angel then uses her deadly combo. However, a sinister smile dashes across Spectres face...

34
Sacred Tree 2018-01-10
Sacred Tree
2018-01-10
Spectres Sunavalon evolves and drives Blue Angel into a corner. As her tactics are gradually sealed off, Blue Angel comes up with a plan to counter Spectres impenetrable battle formation. Now on the defensive, Blue Angel Link Summons a new Trickstar...!

35
The Other Lost Incident 2018-01-17
The Other Lost...
2018-01-17
In order to save LINK VRAINS from destruction, Playmaker heads to the Tower of Hanoi. However, standing in his way is Spectre! Playmaker tries to deal big damage to Spectre, but Spectres Sunavalon combo prevents him from doing that. In this Duel, Playmaker learns about Spectres shocking past...

36
Pointless Justice 2018-01-24
Pointless Justice
2018-01-24
Spectres devious Sunavalon combo keeps replenishing his LP and Summoning Sunvines, but Playmaker never lets up his attacks. Playmaker manages to figure out its weak point, and comes up with a plan to counter it, but...

37
My Mother Tree 2018-01-31
My Mother Tree
2018-01-31
Playmaker uses his ace monster, Excode Talker, to counter Spectre’s Sunvines. In order to finish Playmaker off, Spectre evolves his Sunavalon into its ultimate form. Having driven Playmaker into a corner, Spectre delivers the finishing blow against him...

38
Hanoi’s Recollection 2018-02-07
Hanoi’s...
2018-02-07
As the Tower of Hanoi gradually approaches its completion, Revolver reflects on the battles that had been waged in LINK VRAINS. And now, carrying on the wishes of Dr. Kogami with firm resolve, Revolver makes his move...

39
Bullet Buried in Darkness 2018-02-14
Bullet Buried in...
2018-02-14
Go Onizuka confronts Revolver and challenges him to a Duel. Meanwhile, the Tower of Hanoi is getting closer to completion, gradually absorbing everything in LINK VRAINS...

40
The Thirst for Victory 2018-02-21
The Thirst for...
2018-02-21
Due to Revolvers tactics, many of Go Onizukas monsters have been destroyed. However, GO’s fighting spirit still does not waver. In order to turn things around, GO summons his powerful ace monster, Gouki The Giant Ogre!

42
Stardust Roads Guidance 2018-03-07
Stardust Roads...
2018-03-07
Playmaker manages to withstand the brutal attack of Revolver’s Link Monster. Sensing the presence of monsters in the Tower of Hanoi, he flies right into it. Playmaker then bets it all on a draw, but…

43
The Birth of Ignis 2018-03-14
The Birth of Ignis
2018-03-14
Playmaker has realized who Revolver might be during the Duel. However, due to a shockwave generated in the Data Storm, Yusaku is forced to log out. He now heads to a certain location in the real world, where Revolver is supposed to be…