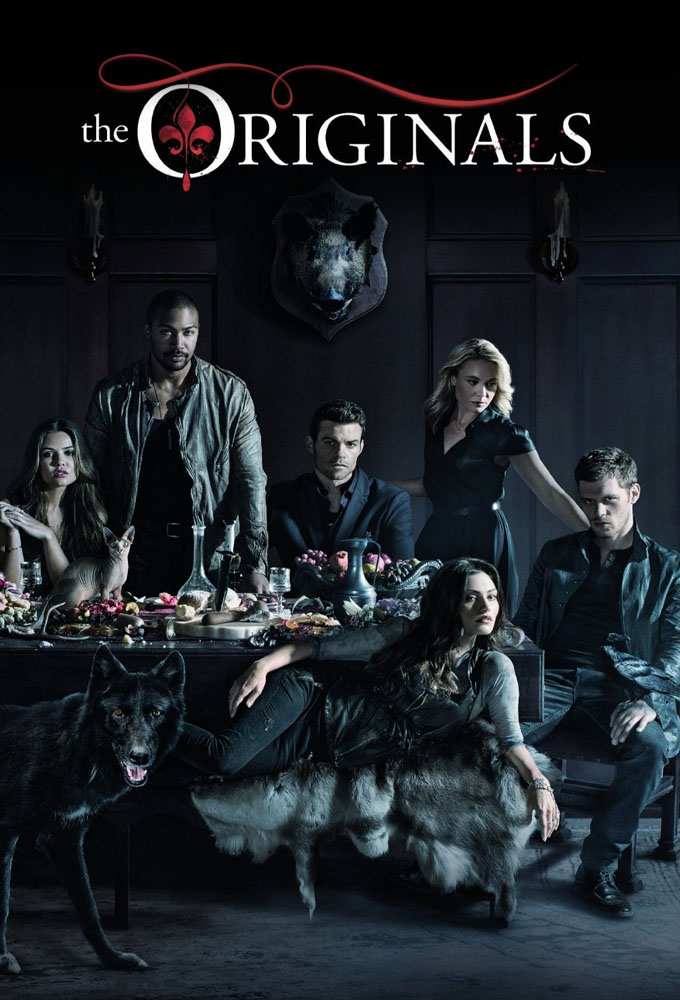 (2013)
Originaltitel: The Originals
Skapad av: Julie Plec
Release: 2013-10-03
TV-bolag: The CW
Längd per avsnitt: 45 min min
Status: AVSLUTAD
Family is power. The Original Vampire family swore it to each other a thousand years ago. They pledged to remain together, always and forever. Now, centuries have passed and the bonds of family are broken. Time, tragedy and hunger for power have torn the Original Family apart. When Klaus Mikaelson, the original vampire-werewolf hybrid, receives a mysterious tip that a plot is brewing against him in the supernatural melting pot that is the French Quarter of New Orleans, he returns to... (TheTVDB)
Action Äventyr Drama Fantasy Skräck

SPECIAL
1
2
3
4
5
SÄSONG 1

1
Always and Forever 2013-10-03
Always and Forever
2013-10-03
Klaus Mikaelson, the original vampire-werewolf hybrid, has returned to the supernatural melting pot that is the French Quarter of New Orleans - the city his family helped build 300 years ago. Determined to help his brother, Elijah leaves their sister Rebekah behind and follows Klaus. Elijah learns...
Regisserat av:

2
House of the Rising Son 2013-10-08
House of the Rising...
2013-10-08
When Rebekah arrives in New Orleans at her brother Elijah’s insistence, she meets Hayley, who gives her some unexpected news. Concerned that her brother Klaus is up to no good, Rebekah seeks help from a reluctant Sophie. At her wits’ end, Hayley takes matters into her own hands, but things...
Regisserat av:

3
Tangled Up in Blue 2013-10-15
Tangled Up in Blue
2013-10-15
After discovering interesting news about someone in Marcels inner circle, Klaus and Rebekah come together to attempt to unravel Marcels empire from within in spite of Elijahs concerns. They enlist help from Sophie, who is reluctant to get involved for fear of the wrath of Marcels secret weapon,...
Regisserat av:

4
Girl in New Orleans 2013-10-22
Girl in New Orleans
2013-10-22
With the annual Dauphine street music festival around the corner, Davina, itching for a night out, convinces Marcel to let her attend. Marcel cautiously obliges but asks Cami to keep a watchful eye on Davina. Agnes convinces Hayley to visit a mysterious doctor in the bayou where she makes a...
Regisserat av:

5
Sinners and Saints 2013-10-29
Sinners and Saints
2013-10-29
Angered by recent events involving the safety of his unborn baby, Klaus demands answers from Sophie, believing she was involved. Sophie reveals to Klaus and Rebekah a troubling secret from her past. Meanwhile, Marcel asks Klaus to accompany him to the bayou after gruesome remains are discovered,...
Regisserat av:

6
Fruit of the Poisoned Tree 2013-11-05
Fruit of the...
2013-11-05
When Klaus discovers Hayleys life is being threatened, he goes to extreme lengths to protect her and their unborn baby. Having a difficult time dealing with the tragic events of her past, Cami turns to Father Kieran for guidance. Feeling as though he can trust no one, Marcel visits an old friend to...
Regisserat av:

7
Bloodletting 2013-11-12
Bloodletting
2013-11-12
When someone from Hayley’s past makes a startling revelation, she grows concerned for herself and the baby. Amidst growing tensions between them, Klaus and Elijah turn to Sabine for help in locating Hayley, who has gone missing. After making a trip down to the bayou, Klaus has a surprising and...
Regisserat av:

8
The River in Reverse 2013-11-26
The River in Reverse
2013-11-26
Rebekah, facing a difficult decision, turns to Father Kieran for guidance. Elijah struggles with the consequences of a recent fallout with Klaus. Hayley remains by his side but is soon drawn away by a mysterious figure who sheds some light on her past. Meanwhile, a frustrated Cami struggles to make...
Regisserat av:

9
Reigning Pain in New Orleans 2013-12-03
Reigning Pain in...
2013-12-03
Marcel, deeply conflicted by recent events, is surprised when Klaus opens up to him about some of his past indiscretions. Cami tries to make sense of cryptic messages shes come across and is disturbed when she gains some insight into Klaus past. Meanwhile, in a surprising turn of events, the human...
Regisserat av:

10
The Casket Girls 2014-01-14
The Casket Girls
2014-01-14
As the French Quarter prepares for its annual celebration of the Casket Girls Festival, Cami suffers through as Davina attempts to free her of Klaus’ mind compulsion. Elijah and Marcel form an unlikely alliance as Klaus sets his plan in motion to get Davina back. Once it’s known that Davina is...
Regisserat av:

11
Après Moi, Le Déluge 2014-01-21
Après Moi, Le...
2014-01-21
When Davina becomes violently ill and the repercussions soon begin to affect the entire French Quarter, Marcel, Klaus, Elijah and Rebekah rush to find out what is going on. Sophie approaches the others with some startling information about the Harvest Festival and presents a drastic plan to save...
Regisserat av:

12
Dance Back from the Grave 2014-01-28
Dance Back from the...
2014-01-28
Marcel, still angered by recent events, refuses to help Klaus when a gruesome discovery is made in the Cauldron. Rebekah is on alert when she uncovers the remnants of a sacrifice down by the docks and immediately realizes that its the work of a dangerous warlock from their past. Meanwhile, when...
Regisserat av:

13
Crescent City 2014-02-04
Crescent City
2014-02-04
At the re-opening of St. Annes Church, Father Kieran finds himself in a great deal of trouble after a run-in with a witch from his past. Marcel and Rebekah grow concerned when the reemergence of someone they once knew threatens to expose secrets theyve kept buried for nearly a century. Elsewhere,...
Regisserat av:

14
Long Way Back from Hell 2014-02-25
Long Way Back from...
2014-02-25
When Rebekah finds herself locked up in the sanatorium where she worked in 1919, she realizes a witch named Genevieve is back to seek revenge and to reveal dark secrets that would destroy Rebekah if exposed. A distraught Elijah turns to Marcel and Hayley for help when one of his decisions puts...
Regisserat av:

15
Le Grand Guignol 2014-03-04
Le Grand Guignol
2014-03-04
In a series of flashbacks to 1919, Klaus opens up to Cami and reveals details of the devastating secret Rebekah and Marcel were trying to keep from him. Elijah forms an unlikely alliance with Monique and asks for her help in locating Sabine. Elsewhere, Thierry is reluctant to get involved when...
Regisserat av:

16
Farewell to Storyville 2014-03-11
Farewell to...
2014-03-11
Despite Klaus’ rage, Elijah is determined to protect Rebekah while the three of them are trapped in the City of the Dead cemetery by a witch’s boundary spell. Klaus and Rebekah trade bitter accusations until Elijah steps in to reveal a long-held secret from the family’s past. Meanwhile,...
Regisserat av:

17
Moon Over Bourbon Street 2014-03-18
Moon Over Bourbon...
2014-03-18
After accusing Klaus of doing nothing while their control over the Quarter crumbles, Elijah makes a move to take matters into his own hands. He receives an intriguing offer of support from Francesca, a beautiful woman from a powerful New Orleans family. In an attempt to bring the warring factions...
Regisserat av:

19
An Unblinking Death 2014-04-22
An Unblinking Death
2014-04-22
Desperate to help Kieran, Cami insists on an unconventional treatment, but her good intentions lead Kieran to a violent episode. After Klaus and Elijah disagree over the best way to handle the Crescent Wolves, Elijah makes a trip to the bayou, where he is witness to a horrific explosion that only...
Regisserat av:

20
A Closer Walk with Thee 2014-04-29
A Closer Walk with...
2014-04-29
Hayley confronts a surprising enemy as she and her unborn baby fall into peril during a celebratory wake to honor a fallen member of the community. In order to save Hayley, Klaus and Elijah enlist the help of Genevieve who struggles to maintain control over Davina and the other young witches. Cami...
Regisserat av:

21
The Battle of New Orleans 2014-05-06
The Battle of New...
2014-05-06
Klaus and Elijah enact a plan to collect the sacred stones needed by Genevieve in order to forever change the fates of Hayley and the werewolf community. Realizing that Klaus’ plan will lead to the extermination of all French Quarter vampires, Marcel rallies an army determined to take down the...
Regisserat av:

22
From a Cradle to a Grave 2014-05-13
From a Cradle to a...
2014-05-13
As the baby’s due date draws near, Klaus and Elijah embark on a search for Hayley, while Hayley herself is determined to do whatever it takes to keep her unborn baby safe and away from the witches. Francesca takes a meeting with Oliver and Jackson to determine the future of the werewolves in New...
Regisserat av: