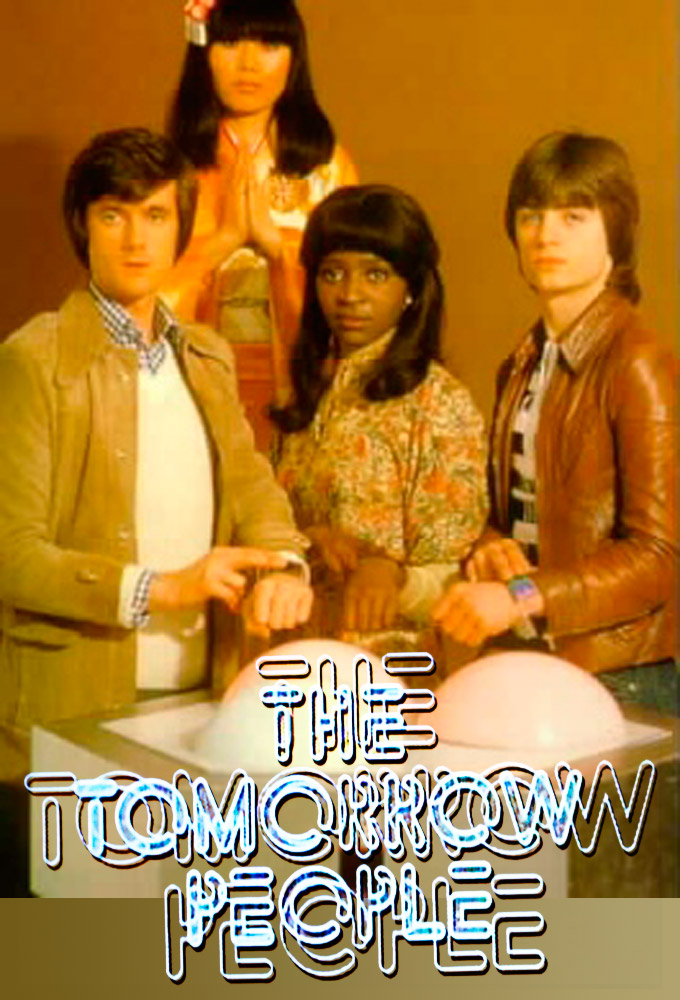 (1973)
Originaltitel: The Tomorrow People
Skapad av: Roger Damon Price
Release: 1973-04-01
TV-bolag: ITV1
Längd per avsnitt: 30 min min
Status: AVSLUTAD
The show concerned the emergence of the next stage of human evolution known colloquially as Tomorrow People. Born to human parents, an apparently normal child might at some point between childhood and late adolescence experience a process called "breaking out", when they develop their special abilities. These abilities include psychic powers such as telepathy, telekinesis, and teleportation. However, they are physically unable to deliberately kill others. (TheTVDB)
Science-Fiction

1
2
3
4
5
6
7
8
SÄSONG 1

1
The Slaves of Jedikiah, Part 1 1973-04-30
The Slaves of...
1973-04-30
The Tomorrow People - John, Carol and Kenny - have discovered that a teenager called Stephen is about to manifest his powers. They trace him to hospital, where he was taken after collapsing from the shock of his new abilities. Carol teleports into his room to make contact, and begins to teach...
Regisserat av:

2
The Slaves of Jedikiah, Part 2 1973-05-07
The Slaves of...
1973-05-07
John, Carol and Kenny mount an operation to rescue the kidnapped Stephen. They take him to their Lab, based in a disused part of the London Underground train system, and introduce him to TIM, their biotropic sentient computer. Stephen is still under Jedikiah�s control, and, left alone in the Lab,...
Regisserat av:

3
The Slaves of Jedikiah, Part 3 1973-05-14
The Slaves of...
1973-05-14
Carol realises that TIM has stopped working and contacts John. They both go to the Lab, but are caught in a trap set by Jedikiah and are stranded in hyperspace. Kenny jaunts to the Lab and manages to reactivate TIM, but Jedikiah burns through the lock of the door, and Kenny is captured. TIM locates...
Regisserat av:

4
The Slaves of Jedikiah, Part 4 1973-05-21
The Slaves of...
1973-05-21
Jedikiah takes Kenny back to his base, and imprisons him, Ginge and Lefty in a room containing a matter transmitter, which transports them all to a spaceship. Carol, John and Stephen locate Jedikiahs base but only just escape before it explodes. Jedikiah reveals that he is a shape-changing android,...
Regisserat av:

5
The Slaves of Jedikiah, Part 5 1973-06-04
The Slaves of...
1973-06-04
John and Stephen jaunt to the ship but are caught in a trap. Carol jaunts to a different part of the ship, and manages to damage Jedikiah with a stun gun. The ship is damaged, releasing John and Stephen. They then find Kenny, and a reformed Ginge and Lefty and release them. The Cyclops explains...
Regisserat av:

6
The Medusa Strain, Part 1 1973-06-11
The Medusa Strain,...
1973-06-11
Five hundred years in the future, a spaceship comes across the shape-changing robot Jedikiah, floating in space. The captain, Rabowski, repairs it. In the present day, Stephen is trying unsuccessfully to develop a photograph of something he saw in hyperspace. Carol and Stephen jaunt into hyperspace...
Regisserat av:

7
The Medusa Strain, Part 2 1973-06-18
The Medusa Strain,...
1973-06-18
Carol and Stephen find Jedikiah, Rabowski and Peter at the Tower of London, but Carol is kidnapped and taken back to Rabowski�s spaceship in the future. Jedikiah and Rabowski put Carol into the airlock and start pumping the air out, to force Peter to operate the Time Key again.
Regisserat av:

8
The Medusa Strain, Part 3 1973-06-25
The Medusa Strain,...
1973-06-25
Peter agrees to use the Time Key to save Carol, but insists that he be able to use his telepathy to help in the task. Jedikiah lets him, and Peter manages to contact John, Kenny and Stephen, telling them where he and Carol being held. John and Stephen jaunt into hyperspace to look for the...
Regisserat av:

9
The Medusa Strain, Part 4 1973-07-02
The Medusa Strain,...
1973-07-02
TIM brings John and Stephen back to the Lab and, with Kenny, is able to bring them back to life. Jedikiah turns against Rabowski and, in the struggle, the Time Key is damaged. Rabowski makes his way to where Carol, Peter and Ginge are imprisoned, and Jedikiah turns the air and heat off. John and...
Regisserat av:

10
The Vanishing Earth, Part 1 1973-07-09
The Vanishing...
1973-07-09
The Tomorrow People are worried by the dramatic increase in natural disasters on Earth. Ginge and Lefty are in Clacton-on-Sea. Ginge meets a girl named Joy, who runs a Haunted House with a man called Smithers. Ginge is kidnapped by Joy, who is working for a strange hooded figure known as the...
Regisserat av:

11
The Vanishing Earth, Part 2 1973-07-16
The Vanishing...
1973-07-16
Lefty is worried about Ginge, and contacts the Tomorrow People. Stephen goes with him to the amusement arcade, where they discover the matter transporter in the Haunted House. They are seen by Smithers and Joy. Lefty escapes, but Stephen is captured by Joy and thrown into the sea. John and Carol...
Regisserat av:

12
The Vanishing Earth, Part 3 1973-07-23
The Vanishing...
1973-07-23
Carol and John go back to the Lab and find Stephen, unharmed. The mysterious man reveals himself to be Steen, a galactic policeman, who is chasing the criminal Spidron, who has been raiding planets for magnamite, a rare substance that holds planets together. Steen, Carol, John and Stephen use the...
Regisserat av:

13
The Vanishing Earth, Part 4 1973-07-30
The Vanishing...
1973-07-30
Ginge breaks free and closes the lava ducts, while Steen, Carol, John and Stephen find the Spidrons control room, just as he and Joy teleport away. Later, Joy goes to Spidrons hideout near his spaceship, and they prepare to leave Earth with the magnamite. Steen, Carol, John and Stephen track...
Regisserat av: