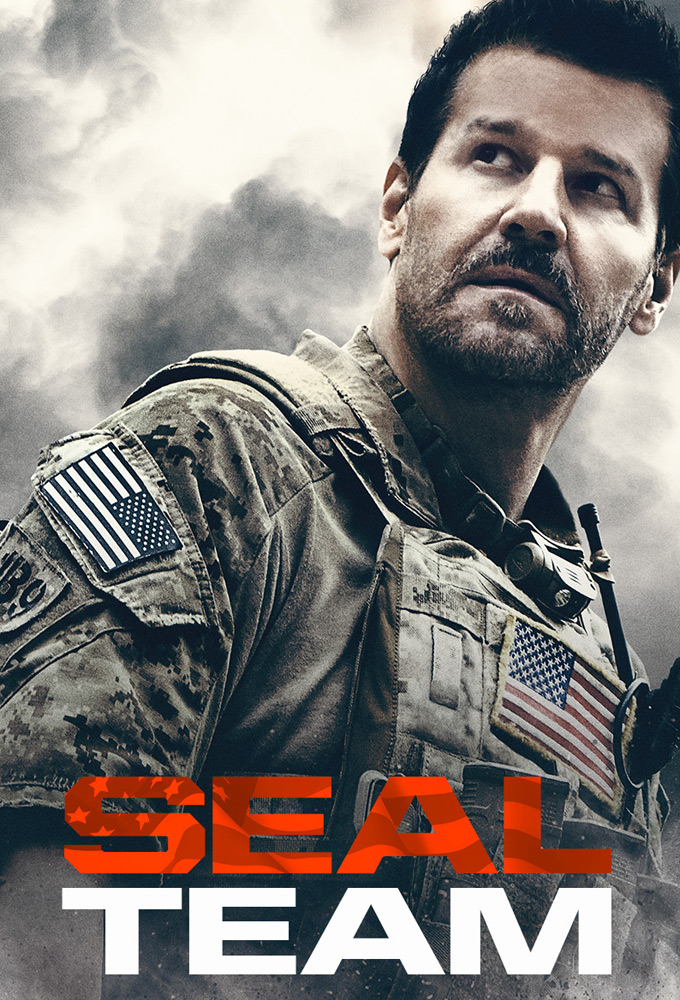 (2017)
Originaltitel: SEAL Team
Skapad av:
Release: 2017-09-27
TV-bolag: CBS
Längd per avsnitt: 45 min min
Status: AVSLUTAD
Nästa avsnitt sänds om 3 dagar | Säsong 3, Avsnitt 17
Failure is not an option for the Navy SEALs - the world’s most elite, special ops forces. In this action-packed new drama, these stealthy and fearless warriors conduct high-risk clandestine missions against impossible odds. And when they return to the home front they face stress of a different nature. Keeping secrets, deploying at a moment’s notice, and the knowledge that each assignment could be their last takes a toll on them and their families. But their unbreakable oath and... (TheTVDB)
Action Drama

1
2
3
SÄSONG 1

1
Tip of the Spear 2017-09-27
Tip of the Spear
2017-09-27
The most elite unit of Navy SEALs must navigate their professional and personal lives as they train, plan and execute the most dangerous, high stakes missions our country can ask of them.
Regisserat av:

2
Other Lives 2017-10-04
Other Lives
2017-10-04
While on an evidence-collecting mission in Syria, Jason and the SEAL Team find innocent civilians in desperate need of rescue just as enemy forces close in on them. Also, while on the mission, the team debates whether or not to tell Ray that his wife has gone into labor.
Regisserat av:

3
Boarding Party 2017-10-11
Boarding Party
2017-10-11
Jason and the SEAL team must rescue a group of researchers being held hostage on a ship in the South China Sea. Also, Clay is ranked in the bottom five of his class, jeopardizing his future as a SEAL.
Regisserat av:

4
Ghosts of Christmas Future 2017-10-18
Ghosts of Christmas...
2017-10-18
Jason and the SEAL Team refuse to abort a mission to capture a dangerous war criminal after it goes sideways. Also, Clay’s controversial father, Ash Spenser, comes to town on his book tour.
Regisserat av:

5
Collapse 2017-10-25
Collapse
2017-10-25
Jason and the SEAL Team must protect the American Embassy in South Sudan when the ambassador refuses to evacuate as the country becomes increasingly unstable. Also, Clay and Stella take their relationship to the next level.
Regisserat av:

7
Borderlines 2017-11-15
Borderlines
2017-11-15
Jason and the SEAL Team must rescue an undercover CIA operative after she is captured by radical terrorists to be used as a bargaining chip. Also, Clay undergoes the final harrowing exercise for his candidacy into Tier One.
Regisserat av:

8
The Exchange 2017-11-22
The Exchange
2017-11-22
Jason and the SEAL Team have mixed feelings when they are tasked with bringing home an American soldier who was captured after deserting, in exchange for detainees in Gitmo.
Regisserat av:

9
Rolling Dark 2017-12-06
Rolling Dark
2017-12-06
Jason and the SEAL team must rescue a Russian scientist and his wife and bring them across the Afghanistan border to safety as Chinese and Russian Special Forces close in, intent on stopping them. Also, Clay endures his first day with Jason’s unit.
Regisserat av:

10
Pattern of Life 2018-01-03
Pattern of Life
2018-01-03
Tensions are high when Jason and the SEAL Team enter a Yemeni house to locate a cell phone linked to a terrorist network, and interrogate the family while the daughter lays in critical condition after being accidentally shot.
Regisserat av:

11
Containment 2018-01-10
Containment
2018-01-10
Jason and the SEAL team are sent to intercept the sale of nuclear weapons, but the mission goes sideways when they must make the treacherous journey back to base with nukes that have unsecured fuel rods. Also, Ray is sidelined with a shoulder injury, and Jason and Alana are shocked by their kids’...
Regisserat av:

12
The Upside Down 2018-01-17
The Upside Down
2018-01-17
While on a mission to retrieve a downed top-secret drone, Jason and the SEAL Team disobey orders so they can save Clay, who is trapped beneath a room full of armed terrorists. Also, Clay and Stella’s relationship takes a new turn.
Regisserat av:

13
Getaway Day 2018-01-31
Getaway Day
2018-01-31
Jason and the SEAL Team must leave their families immediately when their deployment date is moved up after the team they were going to relieve is ambushed. Also, Jason and Alana make a big decision about their future, and Clay and Stella feel the weight of his marriage proposal.
Regisserat av:

14
Call Out 2018-02-28
Call Out
2018-02-28
Jason and the SEAL Team settle into deployment life and get closer to discovering who ambushed Echo Team after Mandy gets a lead from an unlikely source on the base.

15
No Mans Land 2018-03-07
No Mans Land
2018-03-07
Jason and the SEAL Team close in on avenging the deaths of Echo Team when they find the money that funded their murder on a nearby poppy farm that was previously used to make heroin. Also, Jason meets an intriguing woman on the base.

17
In Name Only 2018-03-28
In Name Only
2018-03-28
As Jason and the SEAL Team come closer to avenging the loss of Echo Team, Mandy takes matters into her own hands after her boss won’t green-light her mission to take out their biggest target. Also, Jason is unsure of where his relationship with Amy stands.

18
Credible Threat 2018-04-11
Credible Threat
2018-04-11
Jason and the SEAL Team are tasked with protecting a delegation of congressmen and department of defense officials who come to Jalalabad for a publicity tour even though a credible threat has been made against them.

19
Takedown 2018-04-25
Takedown
2018-04-25
The SEAL Team sends Ray undercover in a busy spice market to make a high-stakes money swap, and Jason attempts to take down a terrorist known to wear a suicide belt. Also, Ray realizes the devastating consequences of his decisions.

20
Enemy of My Enemy 2018-05-02
Enemy of My Enemy
2018-05-02
The lives of Jason and the SEAL Team are in jeopardy when a risky mission to capture a highly valuable target may actually be a trap. Also, Clay and Davis commiserate about the frustrations of having long distance relationships, and Ray has a meeting regarding his involvement with the accidental...

21
The Graveyard of Empires 2018-05-09
The Graveyard of...
2018-05-09
Following a helicopter crash, the SEAL Team must proceed with the mission as hostiles bear down on them and an injured and impaired Jason goes after their target alone.

22
The Cost of Doing Business 2018-05-16
The Cost of Doing...
2018-05-16
After Jason lies about his concussion to get cleared for combat he and the SEAL Team plan a final mission to avenge Echo Teams deaths once and for all before they return home from deployment.