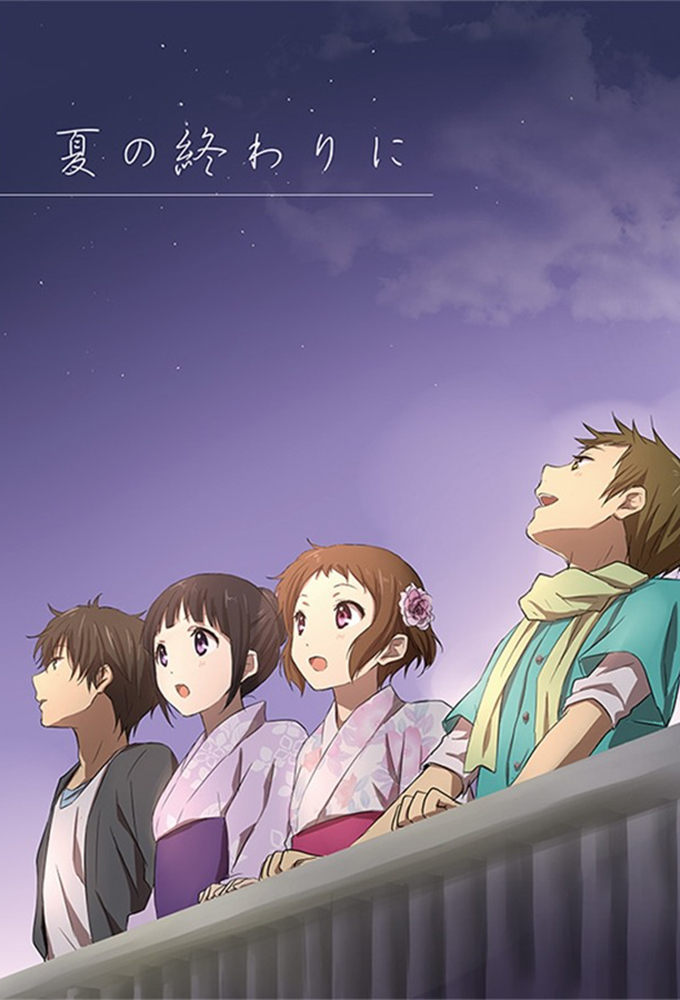 (2012)
Originaltitel: Hyouka
Skapad av:
Release: 2012-04-22
TV-bolag: CTC (JA)
Längd per avsnitt: 25 min min
Status: AVSLUTAD
The story follows a boy named Houtarou who is not assertive about getting involved, but was ordered by his older sister to join the classic literature club. In the club, he gets close to the truth about an incident, involving a female members uncle, which happened 45 years ago. The energy-saving boy is joined by an inquisitive girl in this adolescent mystery. (TheTVDB)
Animerat Mysterium

SPECIAL
1
SÄSONG 1

1
The Esteemed Classics Club Has Been... 2012-04-22
The Esteemed...
2012-04-22
At the request of his older sister, Houtarou Oreki goes to join the Classic Literature Club upon entering high school to stop it from being disbanded. Upon arriving there, he meets another member, Eru Chitanda, who becomes curious as to how she got locked in the clubroom. After Houtarous habit of...
Regisserat av:

2
Activities of the Esteemed Classics Club 2012-04-29
Activities of the...
2012-04-29
Mayaka Ibara is introduced, Houtarou solves another mystery regarding a book borrowed from the library regularly for a short amount of time, as it is actually used by the Art Club for drawings. As they could not find the past anthologies from the Classic Literature Club in the library,...

3
Inheritors of the Classics Club and Its... 2012-05-04
Inheritors of the...
2012-05-04
Eru tells Houtarou about a past memory in which her late uncle told her something about the Classics Club that ended in her being distressed, with her uncle strangely not trying to calm her down at all. Wanting to remember what it was, she asks Houtarou for help and he somewhat agrees, making moves...
Regisserat av:

4
Past Days of the Classics Club and Its... 2012-05-13
Past Days of the...
2012-05-13
The club organised a meet-up to discuss Erus uncles mystery, at Erus house, each member, consisting of Eru, Houtarou, Satoshi and Mayaka, presents their summary of research and their theories. When it is Houtarous turn, he asked to use the toilet, then piece together his theory from all the members...
Regisserat av:

5
The Truth of the Classics Club and Its... 2012-05-20
The Truth of the...
2012-05-20
Houtarou realizes there are still holes in his theory through the phone conversation with his sister. He then confronts the school librarian, Kouriyama Youko being her maiden name and being present at the time of the incident involving Erus uncle. She reveals that Erus uncle was forced onto...
Regisserat av:

6
To Commit a Sin 2012-05-27
To Commit a Sin
2012-05-27
Houtarou is in class when he hears raised voices coming from another classroom, recognizing one of them as Eru’s. Later on in the clubroom when everyone talks about how Eru never gets angry, Houtarou recalls her outburst during class and accidentally triggers her curiosity, as she wonders why the...
Regisserat av:

7
True Colors 2012-06-03
True Colors
2012-06-03
The four Classic Club members go on an Onsen trip, which Eru plans. They stay in an inn that belongs to Mayakas relatives. They are greeted by Mayakis cousins, Rie (older) and Kayo and their family. Eru mentions that she too wishes for a sibling. After having a dip in the Onsen, Houtarou gets dizzy...
Regisserat av:

8
Lets Go to the Screening! 2012-06-10
Lets Go to the...
2012-06-10
The episode starts out with a person texting a friend of his/her about what he/she can do for an arrangement that could not be fulfilled by this friend. The person finishes texting and the scene goes onto someone chatting. This person is asking a senpai on the chat whether or not the senapi can do...
Regisserat av:

9
The Furuoka Deserted Village Murder Case 2012-06-18
The Furuoka...
2012-06-18
After talking with the members behind the production of the film by Fuyumi Irisus class, other than the acting cast, Houtarou Oreki and the other members of the Classics Club are given to listen to each production members theory of what the ending of the unfinished film is supposed to be. Since the...
Regisserat av:

10
What No One Noticed 2012-06-24
What No One Noticed
2012-06-24
Houtarou Oreki was invited by Fuyumi Irisu for some tea. At the restaurant, Fuyumi questions about the theories of here fellow three members of the movie production, whether their theories were correct or not. Houtarou tells her all of them were not good. She then calmly asks what were wrong, which...
Regisserat av:

11
End Credits of the Fool 2012-07-02
End Credits of the...
2012-07-02
Even Mayaka tells Houtarou how the movie was intriguing, she also tells him about the missing prop, which was the rope. Houtarou does remember it being mentioned, and makes an excuse that it could have been an unnecessary item. But Mayaka doesnt buy it, since its a fact that story-writer Hongou...
Regisserat av:

12
Practically Piled to the Ceiling 2012-07-08
Practically Piled...
2012-07-08
The Kanya festival is approaching, and it is already the day before. All four members of the Classics Club are unable to sleep from the anticipation of this festival. Eru takes it up a notch and goes to a shrine to pray for a good luck at the festival. Houtarou gets ready to head for school at the...
Regisserat av:

13
A Corpse by Evening 2012-07-16
A Corpse by Evening
2012-07-16
With the Kanya in full works, it is time for the Quiz Trial 7. With Satoshi, who is still wearing his Saturn outfit, participating in it, he utilizes his database to show who is the tru king of trivia. The first part is easy, where all the participants has to either stand one side of a given line,...
Regisserat av:

14
Wild Fire 2012-07-23
Wild Fire
2012-07-23
Satoshi, Eru, and Mayaka plan to enter their next contest, the Cooking Contest, as part of their plan to advertise the Classics Club. However, Mayaka is forced to finish advertisements for the Manga club before she can go to the competition, forcing Eru and Satoshi to cover the first two parts of...
Regisserat av:

16
The Last Target 2012-08-05
The Last Target
2012-08-05
Houtarou’s sister Tomoe visits the school culture festival, and after purchasing an anthology from her brother, trades her copy of Yube ni wa Mukuro ni for the mirror he had obtained earlier. When Eru sees the manga, she cannot help but notice the similarity of its art to one of the posters in...
Regisserat av:

17
The Kudryavka Sequence 2012-08-13
The Kudryavka...
2012-08-13
After Eru’s successful radio advertisement, several members of the student body gather at the Classics clubroom. In shocking fashion, however, Juumyonji seems to outdo even the brilliant Classics Club. This isn’t fully detrimental to the club, however, as most all of the anthologies are sold...
Regisserat av:

18
Does the Sun Shine on the Peaks? 2012-08-20
Does the Sun Shine...
2012-08-20
Houtarou, to the Classic Literature Clubs surprise and concern, becomes interested in his past teachers changed feeling towards helicopters and his apparent survival of three lightning strikes. Eru is curious about Houtarous interest and tags along with him to do some research at the city library....

19
Those Whom It May Concern 2012-08-27
Those Whom It May...
2012-08-27
Houtarou challenges Eru to come up with a random mystery for him to solve in order to prove that a theory can be created out of anything and that Eru cant rely on Houtarou about everything she ponders. After its announced on the schools intercom, Eru settles on having Houtarou figure out why...

20
Sappy New Year 2012-09-03
Sappy New Year
2012-09-03
Houtarou is awoken by a call from Eru, asking if he would accompany her to the Arekusu Shrine for New Years Eve, mentioning that Satoshi and Mayaka would be there and that she planned on showing off her kimono. When the two arrive at the shrine, Eru offers Kaho Juumonji a gift from her father,...

21
The Case of the Handmade Chocolate 2012-09-10
The Case of the...
2012-09-10
During Valentines Day of their last year of junior high, Mayakas attempt to get Satoshi to accept her feelings fails, which Satoshi attributes on the quality of the chocolate she made. This year, she asks for Erus help to make an even better chocolate than the last. Meanwhile, Houtarou runs into...

22
The Doll That Took a Detour 2012-09-17
The Doll That Took...
2012-09-17
Eru asks Houtarou to be an umbrella carrier for her during this years Doll Festival. Houtarou follows the directions given to him, but is stopped by impending construction on a small bridge, though the worker lets him go through. When he arrives, he is greeted rudely by the busy staff, but upon...