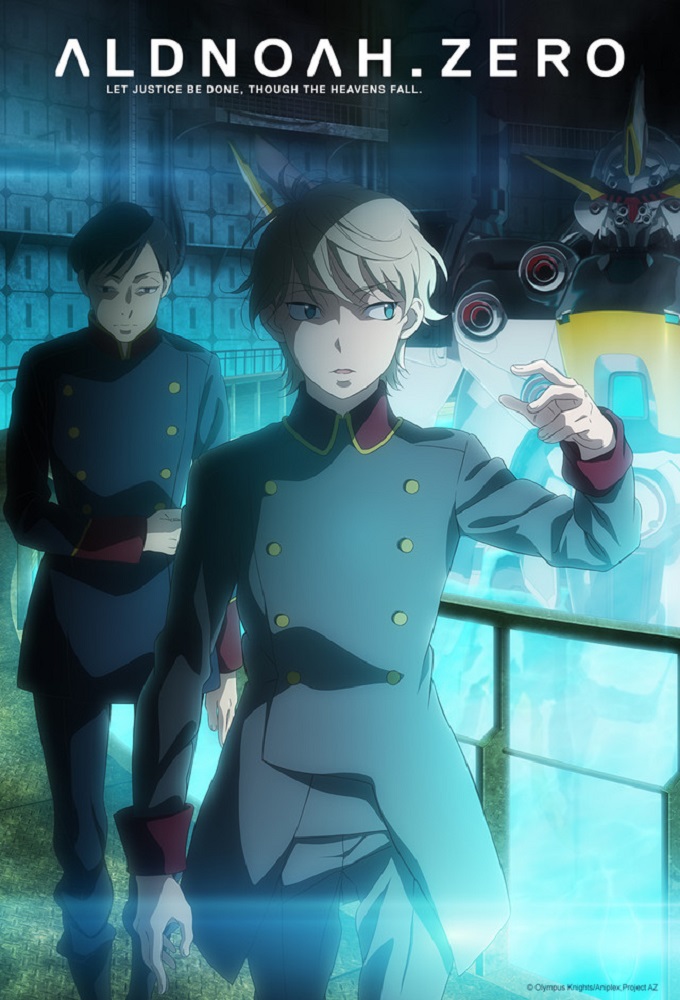 (2014)
Originaltitel: Aldnoah.Zero
Skapad av:
Release: 2014-07-06
TV-bolag: Tokyo MX
Längd per avsnitt: 25 min min
Status: AVSLUTAD
In 1972, the Apollo 17 mission discovered a hypergate to Mars on the surface of the moon. Soon, a war breaks out between Earth and Mars, and Martian soldiers begin to descend from the sky, riding steel giants, intent on exterminating humanity. (TheTVDB)
Action Animerat Science-Fiction

SPECIAL
1
SÄSONG 1

1
Princess of Vers 2014-07-06
Princess of Vers
2014-07-06
The Apollo 17 mission found ancient technology known as the Hypergate on the moon that allowed humans to settle on and terraform Mars. More ancient Aldnoah technology found on Mars was claimed by the immigrants, who founded the Vers Empire, leading to a tense state of affairs with Earth that...

2
Beyond the Horizon 2014-07-13
Beyond the Horizon
2014-07-13
The Vers invasion begins with Landing Castles crashing into New Orleans, Maputo, Beijing, and Tokyo. Martian Kataphrakts emerge and begin to devastate the Terran defenders. In Shinawara, while preparing to evacuate, Inaho finds Edelrittuo and an unknown girl and informs them they need to evacuate....

3
The Childrens Echelon 2014-07-20
The Childrens...
2014-07-20
Inaho and his friends find themselves holed up in the school with orders to distract the enemy Kataphrakt while 2nd Lt. Marito builds a plan to evacuate his students and the civilians with them. Not satisfied to just be a distraction, Inaho comes up with a strategy to fight back against Trillram...

5
Phantom of the Emperor 2014-08-03
Phantom of the...
2014-08-03
The Emperor of Mars calls for a cease fire. Inaho and friends take the moment to rest aboard an Earth Navy Ship. Slaine tries to find a way to reveal the conspiracy of the Martian Forces true intentions.

6
Steel Step Suite 2014-08-10
Steel Step Suite
2014-08-10
The Emperor of Mars broadcasts an offcial declaration of war against Earth. Inaho and his friends are drafted into the military and Slaine is on the run.

8
Then and Now 2014-08-24
Then and Now
2014-08-24
Princess Asseylum reveals herself to the Earth forces and Slaine remembers the time he spent with the Princess whilst being tortured by Count Cruhteo.

9
Darkness Visible 2014-08-31
Darkness Visible
2014-08-31
Slaine wakes up in the Landing Castle of Count Saazbaum and learns the true intentions of the Count. Rayet and Lt. Marito must deal with with their individual memories of those they have lost to the Martians.

10
Before the War 2014-09-07
Before the War
2014-09-07
Inaho successfully revives Asseylum in the shower room using CPR and a defibrillator, but Rayet grabs Magbaredges pistol and holds everyone hostage. First Rayet blames Asseylum for being able to integrate into the United Earth forces while she and her father were outcasts, then she turns the gun on...

13
This Side of Paradise 2015-01-10
This Side of...
2015-01-10
19 months after the events at Saazbaums Landing Castle, a UFE raiding party finds themselves shot down by the Tharsis, piloted by Slaine himself. Slaine has become a Vers Knight with the power of Aldnoah under Saazbaum, and the Vers Empire has been slowly conquering North and South America under...

14
The Beautiful and Damned 2015-01-17
The Beautiful and...
2015-01-17
The UFE forces gather in Earths orbit at Trident Base, built into an asteroid, as they prepare for a large-scale operation against another asteroid base called Marineros owned by Vers. Meanwhile, Saazbaum rallies his own forces for a quick strike on Trident as they travel to Marineros Base. Slaine...

15
Toll for the Brave 2015-01-24
Toll for the Brave
2015-01-24
Both UFE and Vers forces prepare for battle on their respective asteroid bases. Magbaredge confirms with Inaho that it wasnt Asseylums blood alone that gave him Aldnoah activation, but something that was transferred when he gave her CPR. Meanwhile, other Counts of the Vers Empire show open contempt...

16
Soldiers Pay 2015-01-31
Soldiers Pay
2015-01-31
As Slaine ascends the ranks, he puts a plan into motion to deflect scrutiny. Meanwhile, Yuki prepares for a possible reunion with Inaho as the Terrans face another Kataphrakt threat.

19
Here to There 2015-02-21
Here to There
2015-02-21
Princess Asseylums marriage to Slaine is officially announced. Meanwhile, Slaine organizes an unprecedented attack on Earth after rallying as many Counts to his cause as possible.

21
The Fortunes Fool 2015-03-07
The Fortunes Fool
2015-03-07
At a loss on how to deal with a multiple Kataphraktoi attack, the Terran forces rest their hopes on Inahos abilities. However, they may be relying on him too much. Lemrina, meanwhile, makes a move after figuring out her sister has awoken.

22
Out of the Past 2015-03-14
Out of the Past
2015-03-14
The Terran forces prepare a two-pronged attack on the Martians. Inaho continues to feel the negative effects of relying on his cybernetic eye. Klancain meets with Slaine.

23
The Unvanquished 2015-03-21
The Unvanquished
2015-03-21
Both the Terrans and the Martians prepare for a massive final battle. Meanwhile, with her allies dwindling, Princess Asseylum makes a valiant last-ditch effort to end the war once and for all.

24
Inherit the Stars 2015-03-28
Inherit the Stars
2015-03-28
Empress Asseylum declares a cease-fire and, with Slaines resolve seemingly shaken, a rift surfaces between the Orbital Knights. Inaho and Slaine finally settle their differences on the battlefield.