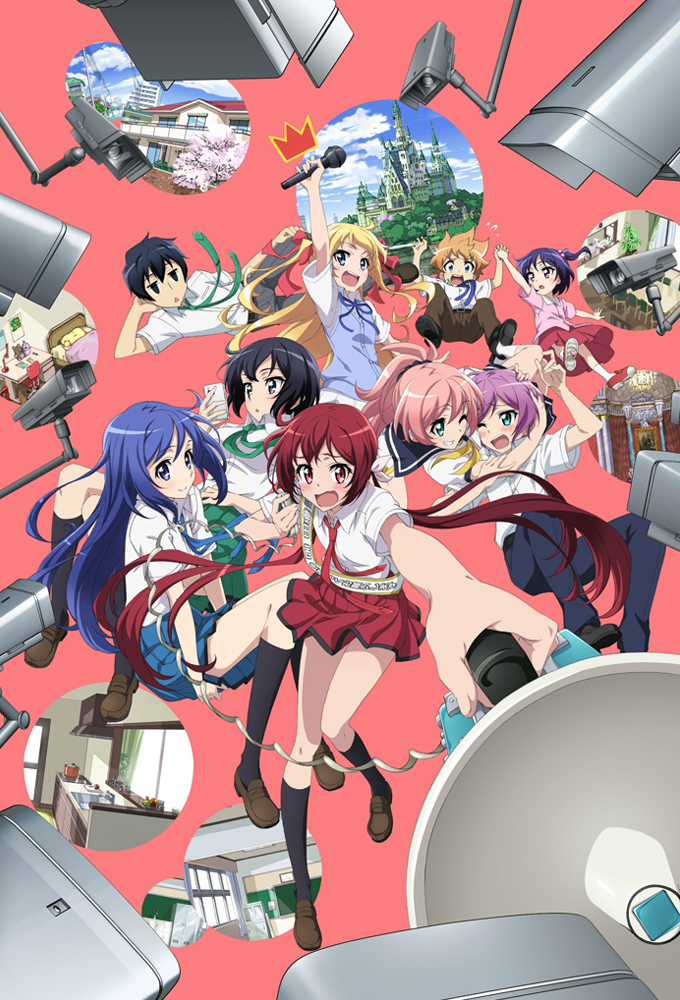 (2015)
Originaltitel: Castle Town Dandelion
Skapad av:
Release: 2015-07-02
TV-bolag: Tokyo Broadcasting System
Längd per avsnitt: 25 min min
Status: AVSLUTAD
The Sakurada family is a pretty ordinary family of eleven people living in a solitary house. Except that their father is the king, and each of the children has special powers. Also, to ensure their safety and to help citizens decide the next king, the house is observed by more than 200 security cameras. (TheTVDB)
Animerat

1
SÄSONG 1

1
The Sakurada Familys Nine Siblings 2015-07-02
The Sakurada...
2015-07-02
Shy Akane is the fourth of nine siblings of the Royal Sakurada Family. Although she cannot even pass by a surveillance camera without wanting to hide, her father, the King, has decided to hold an election to name his successor.
Regisserat av:

2
Big Sisters Good Image / Satos... 2015-07-09
Big Sisters Good...
2015-07-09
We learn more about Kanade, the second royal princess, and her relationship with Akane. We also meet Sato, Shus classmate, and find out her feelings for him.
Regisserat av:

3
I Want to Be Popular / First Errand /... 2015-07-16
I Want to Be...
2015-07-16
Its another typical day for the Sakurada Royal Family. Hikari tries her best to appeal to the citizens. Teru endures the trials of his first errand. Hikari decides the best way to get more votes for the election is to become a popular idol.
Regisserat av:

4
The Royal Princess’ Skirt / The... 2015-07-23
The Royal...
2015-07-23
Akane goes to school without a crucial piece of clothing. Also, the student council is making all students participate in a town beautification day. Who is behind this and how will Akane deal with all the cameras?
Regisserat av:

5
Summer Vacation / Online Secret / Eight... 2015-07-30
Summer Vacation /...
2015-07-30
Its summer and the Sakurada Royal Family are at the beach! Haruka is doing something fishy on the internet, and Misaki is busy at school as all her clones help out in different clubs. Misaki isnt too happy about it, though.
Regisserat av:

7
Worrywart King / Secret Idol 2015-08-13
Worrywart King /...
2015-08-13
The King goes on a business trip, reluctantly leaving Kanade in charge of a Akane and Shiori. Meanwhile, Hikari gets to work with Sacchy, but Sacchy is not friendly. How can Hikari get Sacchy to like her?
Regisserat av:

9
Scarlet Bloom / Big Sisters Birthday 2015-08-27
Scarlet Bloom / Big...
2015-08-27
We meet Scarlet Bloom, a masked heroine with red pigtails and who can control gravity. Who could her true identity be?! While things are ramping up for the election, its almost Christmas Eve, which is also Aois birthday.
Regisserat av:

10
Search★Lights Whereabouts / Onii-chan... 2015-09-10
Search★Lights...
2015-09-10
The elections are drawing near and Search☆Light is performing again, but there is tension in the air between Sachiko and Raito. Meanwhile, even though Kanade and Shu are twins, they have their differences in opinion.
Regisserat av:

11
Farewell, Scarlet Bloom 2015-09-10
Farewell, Scarlet...
2015-09-10
Its one month before the elections. We learn why Akane hates being in the public eye. Then, due to an unfortunate circumstance, the king cannot perform his duties. How will the Sakurada Royal Siblings save the day?
Regisserat av: