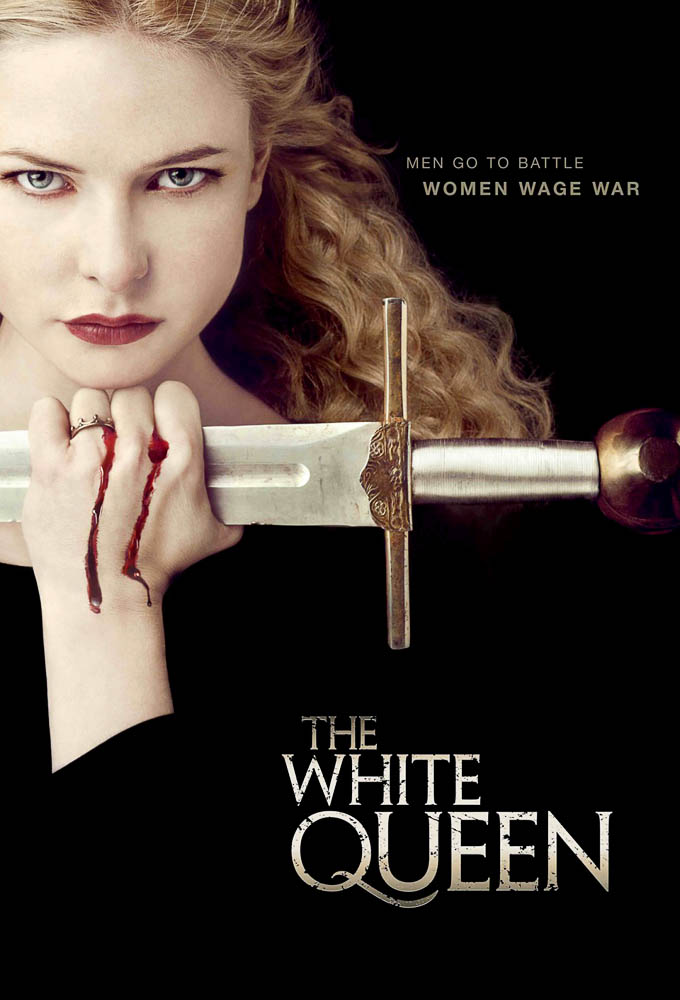 (2013)
Originaltitel: The White Queen
Release: 2013-08-10
TV-bolag: BBC One
Längd per avsnitt: 60 min min
Status: AVSLUTAD
The White Queen is a stunningly rich tale of love and loss, seduction and deception, betrayal and murder, vibrantly woven through the stories of three different yet equally driven women, in their quest for power as they manipulate behind the scenes of history – Elizabeth Woodville, Margaret Beaufort and Anne Neville. The year is 1464 and England has been at war for nine years battling over who is the rightful King of England – it is a war between two sides of the same family, The... (TheTVDB)
Drama

1
SÄSONG 1

1
In Love with the King 2013-06-16
In Love with the...
2013-06-16
After meeting beautiful widow Elizabeth Woodville, young King Edward IV must choose between love and loyalty. Will a country divided by war and a court divided by jealousy be destroyed by a woman many consider a witch?
Regisserat av:

2
The Price of Power 2013-06-23
The Price of Power
2013-06-23
After Elizabeths coronation, an extravagant display designed to silence critics of their marriage, Edward needs a son to secure his reign. But tensions at court escalate into outright war and Edward must fight those closest to him to retain his crown. Elizabeth faces devastating loss as the full...
Regisserat av:

3
The Storm 2013-06-30
The Storm
2013-06-30
Desperate to further her sons claim to the throne, Margaret Beaufort joins Warwicks rebellion against Edward. The rebellion fails and the traitors must run for their lives. Jasper Tudor escapes into exile, while Warwick and George sail for France. Elizabeth and Jacquetta turn to witchcraft to stop...
Regisserat av:

4
The Bad Queen 2013-07-07
The Bad Queen
2013-07-07
Exiled in France, Warwick still plots to control the crown. His youngest daughter Anne is used to make an unexpected alliance, giving him command of a huge army. When Warwick lands in England, Edward must decide whether to fight or run. Terrified, Elizabeth escapes to sanctuary, not knowing if her...
Regisserat av:

5
War at First Hand 2013-07-14
War at First Hand
2013-07-14
Lancaster is restored to the throne, with Warwick in control. But rumours that Edward is returning with an army unsettle the court. Anne and Margaret of Anjou sail from France, uncertain they will reach Warwick in time to win. Divided families face each other across the battlefield. Can Elizabeths...
Regisserat av:

6
Love and Death 2013-07-21
Love and Death
2013-07-21
The crown is secure, but there is no peace at court. Elizabeth suffers more emotional turmoil as she loses those closest to her. Margaret Beaufort plans a political marriage to bring Henry home from exile - but has she met her match in Lord Stanley? Annes marriage made her a traitor, so she is...
Regisserat av:

7
Poison and Malmsey Wine 2013-07-28
Poison and Malmsey...
2013-07-28
Georges anger at losing the Warwick inheritance and his failure to capture the crown resurfaces, with horrific consequences. As the court divides, George openly accuses Elizabeth of witchcraft and Edward of murder. This is treason, and Edward must condemn his own brother to death. Elizabeth finally...
Regisserat av:

8
Long Live The King 2013-08-04
Long Live The King
2013-08-04
After years of peace an untimely death once again engulfs Elizabeth in a fight for the throne. Trapped in sanctuary and threatened by those closest to her, Elizabeth is forced into an alliance with Margaret Beaufort. Suspicion and doubt poison the court, turning friends into enemies and family into...
Regisserat av:

10
The Final Battle 2013-08-18
The Final Battle
2013-08-18
Princess Elizabeths engagement to Henry Tudor threatens to divide court loyalties. Richard knows he can no longer avoid the battle which will decide his fate as king. Margaret does not know whose side her husband will support, and fears for her son. As the final battle for the crown draws near,...
Regisserat av: