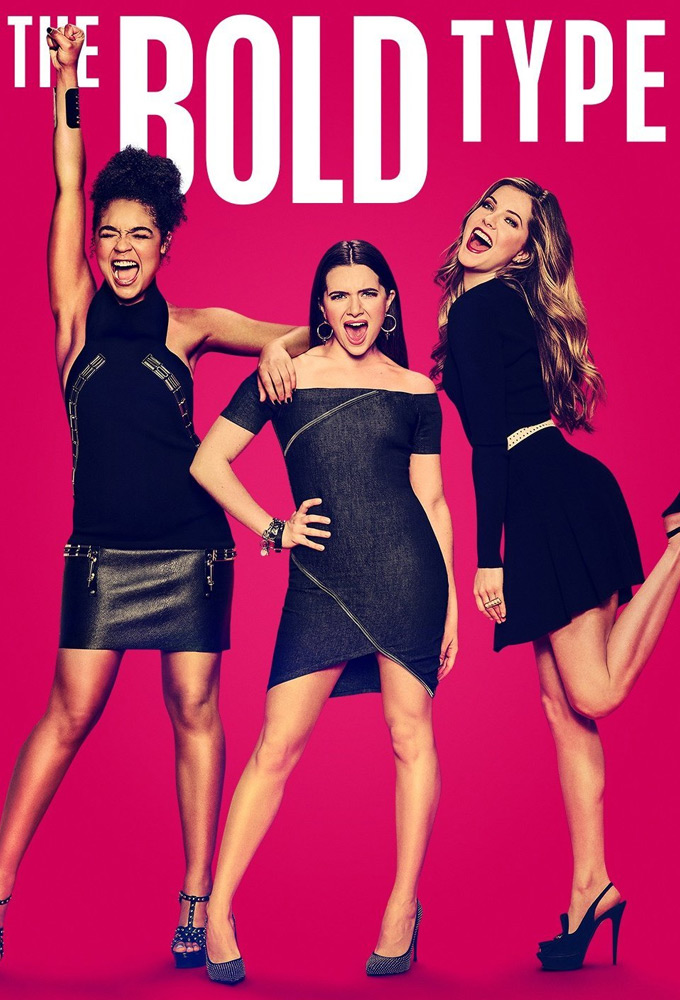 (2017)
Originaltitel: The Bold Type
Skapad av:
Release: 2017-07-11
TV-bolag: Freeform
Längd per avsnitt: 45 min min
Status: AVSLUTAD
The series is centered around three friends – Jane (Katie Stevens), Kat (Aisha Dee), and Sutton (Meghann Fahy) – who all work for Scarlet, a global womens magazine. The show explores their outrageous lives in New York City as they learn to find their own voices and explore their sexuality, identity, love, and fashion. (TheTVDB)
Drama

1
2
3
4
SÄSONG 1

1
Pilot 2017-06-20
Pilot
2017-06-20
Newly promoted writer Jane is unsettled when Jacqueline assigns her a big story -- writing about why her ex broke up with her. Kat chases a story about outspoken photographer Adena, but is confused by her strong connection to the woman. Meanwhile, Sutton tries not to feel left behind by her best...
Regisserat av:

2
Oh Hell No 2017-07-11
Oh Hell No
2017-07-11
Kat finds herself questioning her identity as she continues to spend time with Adena. Jane is horrified when she is tasked with writing Scarlet’s sex column – especially when her story turns intensely personal. And Sutton is given an opportunity to advance at Scarlet, but questions if it’s...
Regisserat av:

3
The Woman Behind the Clothes 2017-07-18
The Woman Behind...
2017-07-18
Kat finds herself the victim of internet trolling when she stands up for gender inequality. Sutton thinks she may have found her dream job but worries she doesn’t have what it takes to make it work. And Jane pursues a story about a congresswoman but tries to find a different angle to make her...
Regisserat av:

4
If You Cant Do It with Feeling 2017-07-25
If You Cant Do It...
2017-07-25
Sutton is flustered when someone at Scarlet has the wrong impression of her professional background. Jane is determined to prove she can have a friends with benefits relationship without feelings getting in the way. And Kat and Adena continue growing closer.
Regisserat av:

5
No Feminism in the Champagne Room 2017-08-01
No Feminism in the...
2017-08-01
Jane is stunned when the subject of her latest article, a woman who left a finance job to become an exotic dancer, threatens to sue Scarlet – and Jane. Sutton is excited when she thinks she’s making a step forward in her career. Kat questions whether she is ready for a real relationship with...
Regisserat av:

6
The Breast Issue 2017-08-08
The Breast Issue
2017-08-08
In promoting Scarlet’s breast health awareness campaign, Kat tries to be bold with her message, but is left wondering whether her competitive nature is hurting her cause. Jane confronts past issues and current anxieties when she is tasked with writing a controversial piece about BRCA gene...
Regisserat av:

7
Three Girls in a Tub 2017-08-15
Three Girls in a...
2017-08-15
Richard is determined to get to know Sutton’s friends outside of the office and invites the girls to dinner, but things don’t quite go as planned. Sutton attempts to network with a new social circle by attending a high tea. While on a date with someone else, Jane comes to a realization about...
Regisserat av:

8
The End of the Beginning 2017-08-22
The End of the...
2017-08-22
As rumors of layoffs at Scarlet sweep through the office leaving everyone unsettled, Jane learns of a potential opportunity at a rival publication. Sutton is given a big opportunity when a coworker buckles under pressure. Kat is tasked with organizing a “Readers Night” for Scarlet, but is...
Regisserat av:

9
Before Tequila Sunrise 2017-08-29
Before Tequila...
2017-08-29
Jane, Sutton, Alex, Pinstripe and Jacqueline are all trapped in the Scarlet offices due to a massive traffic jam. Forced to spend time together, Jane reexamines her feelings for Pinstripe. Sutton makes a surprising move. And when she learns Adena is leaving New York, Kat makes an impulsive decision.
Regisserat av:

10
Carry The Weight 2017-09-05
Carry The Weight
2017-09-05
Jane gets an eye opening experience when she is tasked with writing a piece about a performance artist/activist who is speaking out about sexual assault. Kat is distracted by thoughts of Adena while trying to throw a memorable New York Fashion Week party; Sutton gets into an awkward situation with...
Regisserat av: