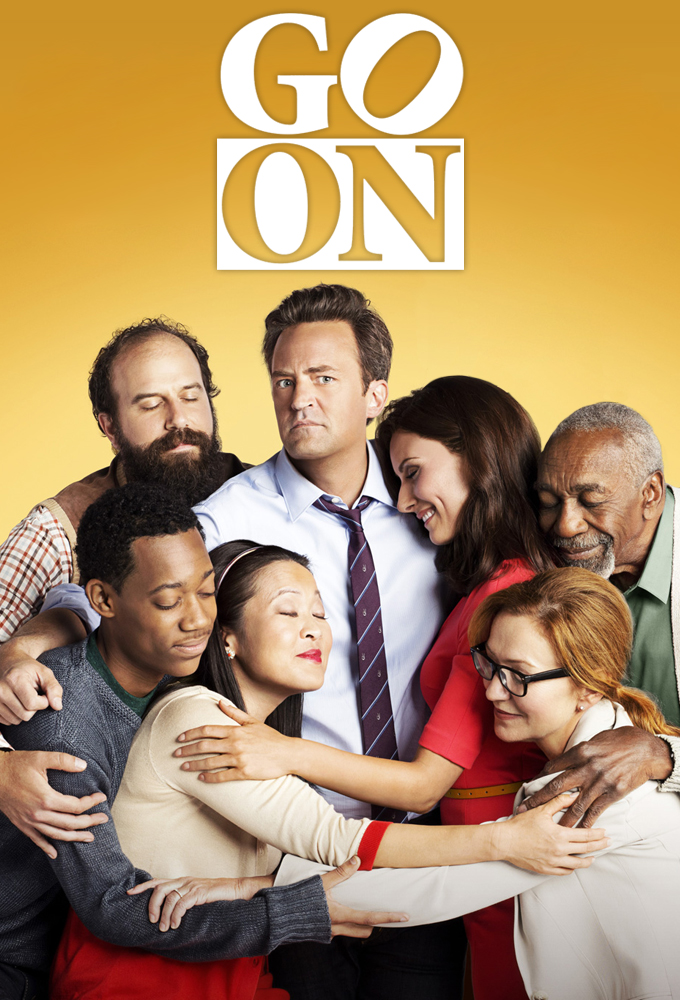 (2012)
Originaltitel: Go On
Skapad av: Scott Silveri
Release: 2012-08-08
TV-bolag: NBC
Längd per avsnitt: 30 min min
Status: AVSLUTAD
After taking some time to deal with the death of his wife, sportscaster Ryan King is ready to push his feelings down and get back to work. However, Ryans boss, preferring that Ryan work through his grief first, refuses to let him back on air until he gets counseling. Reluctantly, Ryan joins a support group, where his lack of interest in healing not only makes therapy interesting but also may just serve as the breath of fresh air needed to get his fellow group members back on track to... (TheTVDB)
Komedi

2
He Got Game, She Got Cats 2012-09-11
He Got Game, She...
2012-09-11
Ryan disregards Laurens all talk, no action philosophy and encourages Sonia to break up with her boyfriend; Georges love of basketball is rekindled.
Regisserat av:

5
Do You Believe In Ghosts... Yes! 2012-10-02
Do You Believe In...
2012-10-02
Ryan makes progress and begins taking care of himself in Janies absence. Elsewhere, the group helps Lauren study for a real-estate exam, and Steven hits the town with Ryan in the wake of a breakup.

8
Videogame, Set, Match 2012-11-13
Videogame, Set,...
2012-11-13
Though Ryan is reluctant to take Owen under his wing, he begins to realize Owen may need a big brother figure in his life. Meanwhile, Yolanda decides shes ready to graduate from the group and Steven hires a new K-Bal Girl.

9
Dinner Takes All 2012-11-20
Dinner Takes All
2012-11-20
An old college friend arrives, sparking a surprise competition between Ryan and Steven to win her affection. Meanwhile, Ryan takes the gang to the studio for Thanksgiving; Owens mother scrutinizes Laurens qualifications; and Ryan meets Annes children.

10
Back, Back, Back... It's Gone! 2012-11-27
Back, Back, Back......
2012-11-27
When Ryan decides its time to start dating again, Misty May-Treanor offers to help and invites him to play in a game of beach volleyball with her friends. Elsewhere, George outlives his doctors predicted life expectancy for him and is ready to celebrate and Danny develops feelings for Sonia.

11
The World Ain't Over 'Til It's Over 2012-12-04
The World Ain't...
2012-12-04
When the group settles on a date for their holiday party, it happens to fall on what Mr. K believes will be the end of the world. Ryan invites Anne along on his annual trip to wine country with Steven and Lauren worries her boyfriend is ready to pop the question.

12
Win at All Costas 2013-01-08
Win at All Costas
2013-01-08
Ryan receives an invitation from Bob Costas, his hero, to take part on his new TV show while Fausta invites everyone in the group to her nieces Quincenierra - everyone except Anne. Meanwhile, after completing a major project at work, Mr. K searches to find a new way to contribute and make a...
Regisserat av:

13
Gooooaaaallll Doll! 2013-01-15
Gooooaaaallll Doll!
2013-01-15
Despite Carrie’s warning, Ryan wants to get his first date out of the way and asks Carrie’s flaky friend, but not without a little competition from Shaun White. Meanwhile, Yolanda starts a new job at the hospital where Sonia works and tries to reinvent herself.

14
Comeback Player of the Year 2013-01-22
Comeback Player of...
2013-01-22
Ryan fears the group chemistry will change and feels threatened by the return of the very popular and beautiful former group member, Simone (Piper Perabo) who tries to force the group to choose between her and Ryan. Meanwhile Steven and Mr. K buddy bond and along with Terrell Owens, teach Ryan a...

15
Pass Interference 2013-01-29
Pass Interference
2013-01-29
Ryan woos an attractive group member, but Janies ghost materializes as he feels great guilt for dating again. Elsewhere, some of the ladies set out to buy a wedding dress for Lauren.
Regisserat av:

17
Ring and a Miss 2013-02-26
Ring and a Miss
2013-02-26
Ryans wedding ring causes complications. Meanwhile, Ryan asks Simone to move in with him after he has an encounter with his mirthless bachelor friend; and Anne hesitantly enlists Mr. K as a babysitter.

18
Double Down 2013-03-05
Double Down
2013-03-05
Ryan, still pained from the breakup with Simone, backslides into his old gambling habit, though sternly warned by Lauren to steer clear. But when he receives the life insurance check for his deceased wife, it’s more than he can bear and he starts making bets on anything and everything. Meanwhile...

19
Go For the Gold Watch 2013-03-19
Go For the Gold...
2013-03-19
Although his radio show is tops in the ratings, Ryan still cant find personal happiness. He pursues inner peace by trying to romantically connect Danny and Sonia, but she has eyes for someone else. Elsewhere, Owen and Anne explore quirky Mr. Ks house.

20
Matchup Problems 2013-03-26
Matchup Problems
2013-03-26
Ryan dates a recent widow. Serving as his wingman is Anne, who ends up competing against Ryan for the widows attentions. Elsewhere, Lauren unwittingly lures a man away from Yolanda.

21
Fast Breakup 2013-04-04
Fast Breakup
2013-04-04
Ryan finds a new rival in the K-Ball Mascot. Also, Ryan is unsure how to handle a flirty, drunk-dial call from his secretary Carrie. In a strange role reversal, Ryan becomes counselor to Lauren in her confused love life while the group prepares a bachelorette party that will never be.

22
Urn-ed Run 2013-04-11
Urn-ed Run
2013-04-11
Worried that his career is in shambles, Ryan travels to New York with Steven to interview as host of a national show, set up for him by Anne. Meanwhile, the group grumbles theyre getting nothing out of their sessions and blame Lauren to such an extent that Yolanda and Sonia make up a big problem...