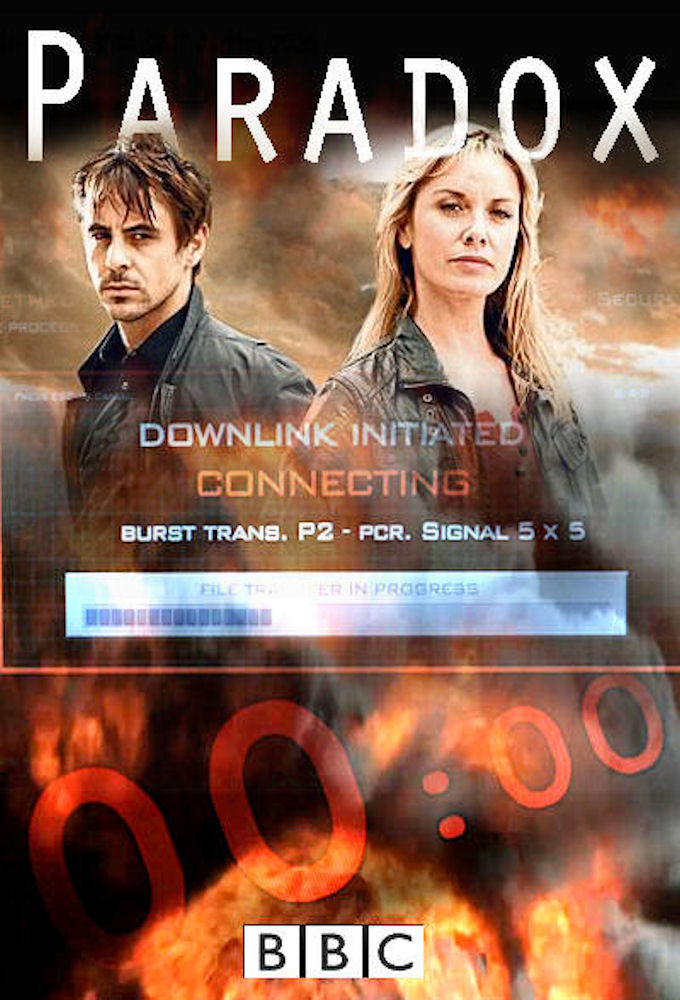 (2009)
Originaltitel: Paradox
Skapad av:
Release: 2009-11-24
TV-bolag: BBC One
Längd per avsnitt: 60 min min
Status: AVSLUTAD
If you could see the future, would you change it? That’s the dilemma facing Detective Inspector Rebecca Flint and astrophysicist Dr. Christian King when a series of rogue images transmitted into his laboratory from space, throw them together. The fragmented images appear to be of a major incident, but shockingly they suggest it has yet to happen; it’s in the future! It looks like they have just 18 hours to work out the clues and prevent a tragedy. (TheTVDB)
Drama Science-Fiction

1
SÄSONG 1

1
Episode One 2009-11-24
Episode One
2009-11-24
Dr Christian King, a world-renowned astrophysicist, claims to have received a series of images from space. The images show fragments of an event, an explosion in which many are killed. Shockingly, Dr King claims the disaster is yet to happen. It will take place in 18 hours time. Is this an...
Regisserat av:

2
Episode Two 2009-12-01
Episode Two
2009-12-01
After her previous failure, Rebecca is determined not to make the same mistakes again. This time, she is desperate to change the future and save a boys life. But with minutes to spare, Rebecca learns of a second death scheduled to take place at the zero hour - DS Ben Holts. Not knowing how or when...
Regisserat av:

3
Episode Three 2009-12-08
Episode Three
2009-12-08
A serial rapist is due to violently attack and murder in a few hours, and Rebecca is determined not to let this happen. But Rebecca is beginning to feel conflicted about their new role; for the first time, she begins to question the responsibility involved in seeing the future, and worries she...
Regisserat av:

4
Episode Four 2009-12-15
Episode Four
2009-12-15
The team receive double the amount of images in what appears to be their most unfathomable mystery so far. The images seem to be predicting a robbery, a fire and multiple deaths, but how can they trace so many clues in so little time? One of the images last time was random; are some of these the...
Regisserat av:

5
Episode Five 2009-12-22
Episode Five
2009-12-22
Rebecca always suspected she was helping to cause the events they were supposed to stop. Now she is convinced of this and they receive images more intimate than anything they have previously dealt with. Every image points to a member of the team in some way. One shows a photo of some teenagers shot...
Regisserat av: