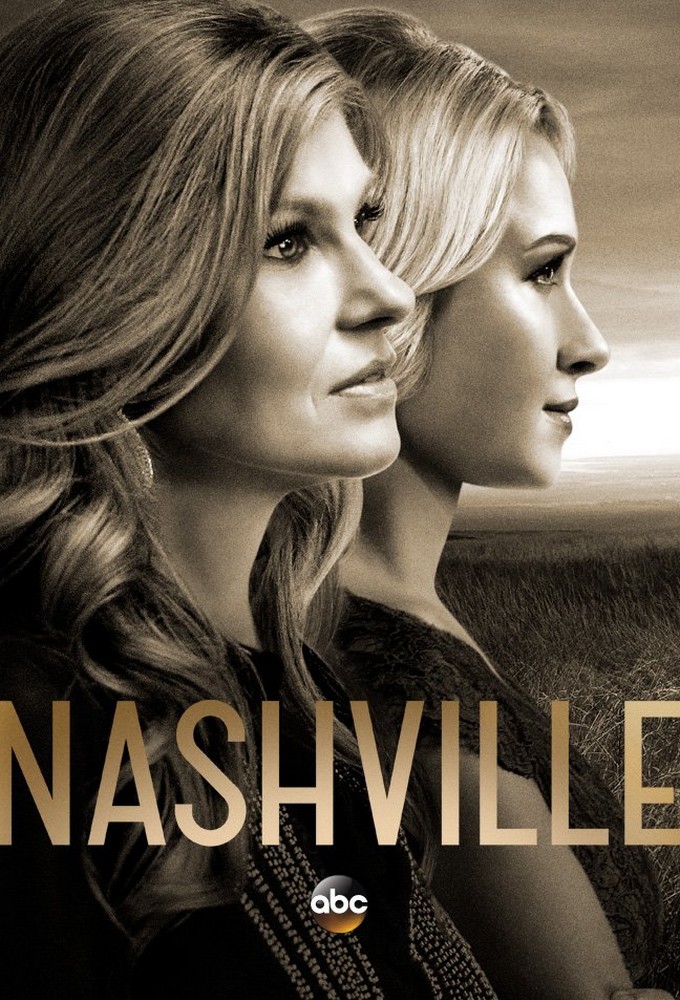 (2012)
Originaltitel: Nashville
Skapad av: Callie Khouri
Release: 2012-10-10
TV-bolag: ABC
Längd per avsnitt: 60 min min
Status: AVSLUTAD
Chart-topping Rayna James is a country legend whos had a career any singer would envy, though lately her popularity is starting to wane. Fans still line up to get her autograph, but shes not packing the arenas like she used to. Raynas record label thinks a concert tour, opening for up-and-comer Juliette Barnes, the young and sexy future of country music, is just what Rayna needs. But scheming Juliette cant wait to steal Raynas spotlight. Sharing a stage with that disrespectful,... (TheTVDB)
Drama

SPECIAL
1
2
3
4
5
6
SÄSONG 1

1
Pilot 2012-10-10
Pilot
2012-10-10
Rayna learns that her record label wants her to tour as the opening act for newcomer Juliette Barnes, and when she refuses, the stage is set for the ultimate power struggle for popularity. Complicating matters, Lamars drive for power results in backing Teddy in a run for Mayor of Nashville, against...
Regisserat av:

2
I Cant Help It (If Im Still in Love... 2012-10-17
I Cant Help It (If...
2012-10-17
Teddys mayoral campaign is moving ahead and Rayna reluctantly endures an investigation that reveals some explosive family secrets. Meanwhile Coleman Carlisle is starting to lay down the groundwork for his campaign when he discovers Lamar is poised to go head to head with him... even if it means...
Regisserat av:

3
Someday Youll Call My Name 2012-10-24
Someday Youll Call...
2012-10-24
Rayna immerses herself in her kids lives and her husbands campaign, and is sobered to learn that she and Teddy are facing financial ruin; Juliette offers Deacon an exclusive contract to write and tour with her; and Juliettes troubled mother, Jolene, re-enters her daughters life in dramatic fashion....
Regisserat av:

4
We Live in Two Different Worlds 2012-10-31
We Live in Two...
2012-10-31
Rayna and Teddys relationship is tested when Rayna performs with Deacon at Teddys campaign fundraiser and a woman from Teddys past (Kimberly Williams-Paisley) shows up with a secret. Meanwhile, Juliette tries to burnish her image with an appearance on Good Morning America and is interviewed by...
Regisserat av:

5
Move It on Over 2012-11-07
Move It on Over
2012-11-07
Rayna thinks about moving on when Deacon sets boundaries in their relationship; as Juliette struggles with her mothers addictions, Deacon is reminded of difficult moments in his past; tension between Gunnar and Avery puts pressure on Scarlet.
Regisserat av:

6
Youre Gonna Change (Or Im Gonna Leave) 2012-11-14
Youre Gonna Change...
2012-11-14
Rayna wants to change her sound and seeks out the help of a highly successful music producer, Liam McGuinnis; Juliette goes on a sham date with a squeaky-clean NFL quarterback as a PR move for her tarnished image; meanwhile, Lamars plan to delay Coleman with a police traffic stop on his way to an...
Regisserat av:

7
Lovesick Blues 2012-11-28
Lovesick Blues
2012-11-28
Marshall Evans continues to pressure Rayna and Juliette to collaborate at an event at the Ryman theater, Teddy is forced to reveal the truth to Rayna when Peggys desperation hits its peak, and in an effort to move past her failed relationship with Avery, Scarlett finds herself getting closer to...
Regisserat av:

8
Where He Leads Me 2012-12-05
Where He Leads Me
2012-12-05
Rayna needs to take a look at what’s really important to her after hearing Teddy’s side of the story about Peggy; Juliette feels a sense of belonging with Sean’s family that she has never experienced before; Gunnar risks his partnership with Scarlett when he confesses his feelings; and music...
Regisserat av:

9
Be Careful of Stones That You Throw 2013-01-09
Be Careful of...
2013-01-09
Rayna and Juliette are locked for their tour. When Rayna suggests taking her girls with her, she finds that Lamars not above holding her hostage with some long forgotten family secrets. To everyones surprise Juliette and Sean have eloped, though not everyone is celebrating. Deacon reconnects with a...
Regisserat av:

10
Im Sorry for You, My Friend 2013-01-16
Im Sorry for You,...
2013-01-16
Rayna and Juliette get ready to perform in San Diego in their first arena concert on the same bill. Rayna finds that working without Deacon is too disruptive and makes an interesting proposal to Liam, while Juliette sends Sean a message through the press. Gunnar takes a road trip to Austin to visit...
Regisserat av:

11
You Win Again 2013-01-23
You Win Again
2013-01-23
Edgehill Records celebrates the success of “Wrong Song” with a lavish party attended by Rayna, Juliette and real-life country stars including Brantley Gilbert and Chris Young (who cameo as themselves). But the party gets awkward for Juliette, who brings her mom along, and for Rayna when she’s...
Regisserat av:

12
Ive Been Down That Road Before 2013-02-06
Ive Been Down That...
2013-02-06
Rayna begins to settle into the tour when she discovers that Deacon has joined Juliettes band on the road, and she cant help but think that maybe the time has come to make some hard decisions. But will a heart to heart with Deacon help ease the sting of the revelation? Meanwhile Juliette is tired...
Regisserat av:

13
Therell Be No Teardrops Tonight 2013-02-13
Therell Be No...
2013-02-13
Rayna finds comfort in the arms of an old friend after revealing to Daphne and Maddie her plans to divorce. Juliette is invigorated by the response to her new sound and takes steps to reinvent herself -- against the guidance of her management. Things are looking up for Scarlett and Gunnar when...
Regisserat av:

15
When Youre Tired of Breaking Other... 2013-03-27
When Youre Tired of...
2013-03-27
Katie Couric guest stars as herself when Rayna appears on the Katie show, trying to set the record straight about her marriage and balancing her career with motherhood. Juliette attempts to take her album launch into her own hands but it backfires when she tweets out a surprise concert location....
Regisserat av:

16
I Saw the Light 2013-04-03
I Saw the Light
2013-04-03
Rayna takes her children and sister with her on tour in NYC, but Rayna doesn’t like the influence Juliette is having on her daughters. Meanwhile Dante gives Juliette some career guidance that helps her see him in a whole new way; Deacon’s feelings for Stacey force him to reconsider his life on...
Regisserat av:

17
My Heart Would Know 2013-04-10
My Heart Would Know
2013-04-10
A personal crisis in Nashville causes Rayna to leave the tour in New York City before her sold-out concert with Juliette, but for Juliette, the show must go on. Jolene stakes a claim on her sober counselor Dante as Juliette gets closer to him personally and professionally, and Deacon doesnt like...
Regisserat av:

18
Take These Chains From My Heart 2013-05-01
Take These Chains...
2013-05-01
Liam invites Rayna to run away with him to finish her album, and Deacon is surprised by his own reaction, as well as Stacy’s accusations; Jolene warns Juliette about Dante’s loyalty, which only drives the two women further apart; Teddy faces off with Peggy about the leaks, and in the wake of...
Regisserat av:

19
Why Dont You Love Me 2013-05-08
Why Dont You Love Me
2013-05-08
Rayna and Juliette are both nominated for CMA Awards and Edgehill Records hosts a party in their honor. Meanwhile Teddy worries about his relationship with Maddie, Juliette copes with new challenges, Scarlett is concerned about Gunnar, and tension grows between him and Will.
Regisserat av:

20
A Picture From Lifes Other Side 2013-05-15
A Picture From...
2013-05-15
Rayna finds an unlikely ally in Lamar when he sides with her against Teddy about the girls. Jolene sees Juliette struggling and tries to find a way to help. Avery and Will, separately, both get a chance to shine with bigger stars -- but will it translate to career gold? And Tandy takes her own...
Regisserat av:

21
Ill Never Get Out of This World Alive 2013-05-22
Ill Never Get Out...
2013-05-22
A shadow has been cast over country music’s biggest night: Juliette discovers a letter from Jolene revealing her mother’s true feelings; Rayna and Deacon’s fairytale evening at the CMA Awards, even performing with Brad Paisley – who guest stars as himself — may not end in a...
Regisserat av: