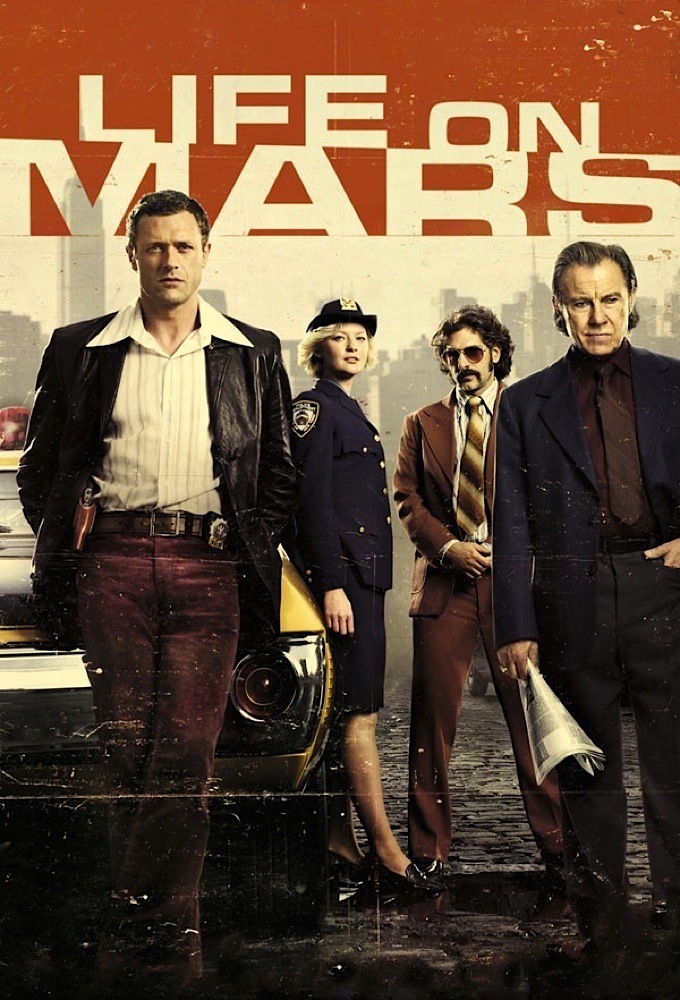 (2008)
Originaltitel: Life on Mars
Release: 2008-10-09
TV-bolag: ABC
Längd per avsnitt: 60 min min
Status: AVSLUTAD
The series tells the story of New York City police detective Sam Tyler (played by Jason OMara), who, after being struck by a car in 2008, regains consciousness in 1973. Fringing between multiple genres, including thriller, science fiction and police procedural, the series remained ambiguous regarding its central plot, with the character himself unsure about his situation. The series also starred Harvey Keitel, Jonathan Murphy, Michael Imperioli, and Gretchen Mol. (TheTVDB)
Action Äventyr Science-Fiction

2
The Real Adventures of the Unreal Sam... 2008-10-16
The Real Adventures...
2008-10-16
Is this vintage1973 Sam Tyler real or not? Sams unbelieving ears clearly hear a radio station announcing that Elvis will perform a concert in memory of his mother, but hes still not sure how or why he landed in these circumstances. Moreover, he doesnt have much time to think about his own...
Regisserat av:

3
My Maharishi is Bigger than Your... 2008-10-23
My Maharishi is...
2008-10-23
The murder of a returning Vietnam veteran has Lieutenant Hunt outraged, as he demands a quick resolution to what quickly becomes a complicated and controversial case. As Sam and the squads team of detectives explore the circumstances surrounding the homicide, Tyler is sent down a mysterious path...
Regisserat av:

4
Have You Seen Your Mother, Baby,... 2008-10-30
Have You Seen Your...
2008-10-30
Sam is unwillingly but hypnotically pulled back into his childhood when he becomes entangled in local gangster Nick Profacis assault on a young, beautiful woman. Sam is amazed to discover that the woman, who is oddly familiar to him, is actually his mother back in 1973. While he anxiously attempts...
Regisserat av:

5
Things to Do in New York When You Think... 2008-11-06
Things to Do in New...
2008-11-06
A racial confrontation is triggered between the African Americans and Puerto Ricans in the neighborhood when a young African American girls body is discovered thrown from a rooftop. Working the case with Sam Tyler and the squad is the cop Sam considers his mentor in 2008 - a much younger Fletcher...
Regisserat av:

6
Tuesday's Dead 2008-11-13
Tuesday's Dead
2008-11-13
With a life-and-death hostage situation paralleling own strange circumstances, Sam Tyler is ordered with the rest of the 1-2-5 to diffuse a potentially deadly face-off at a hospital where a crazed gunman is trying to force a doctor to reverse a dangerous operation on the renegades brother, and the...
Regisserat av:

7
The Man Who Sold the World 2008-11-20
The Man Who Sold...
2008-11-20
When the baby of a prominent family is kidnapped for ransom, Sam Tyler is shocked to discover that his own father, Vic Tyler, may be involved. Sams discovery leads him to face some deep dark secrets about his childhood.
Regisserat av:

8
Take a Look at the Lawmen 2009-01-28
Take a Look at the...
2009-01-28
Lt. Hunts squad and Lt. Nunzios crew renew their long-standing rivalry due to a bank robbery with a connection to the Russian mob. Meanwhile, Sam is attracted to a pretty, young social worker.
Regisserat av:

9
The Dark Side of the Mook 2009-02-04
The Dark Side of...
2009-02-04
Rays shady brother may have played a role in the number of recent decapitations in which the squad is investigating. but other suspects pop up too, such as a biker, a Wall Street executive and badly disfigured man.
Regisserat av:

11
Home is Where You Hang Your Holster 2009-02-18
Home is Where You...
2009-02-18
NYC Councilman Bobby Prince shares a secret with Sam after Prince is caught with a hooker during a raid on a motel. The secret leaves Sam with even more questions as well as the realization he has more in common with Prince than he had ever thought. Meanwhile, Gene Hunt locks down the precinct...

12
The Simple Secret of the Note in Us All 2009-02-25
The Simple Secret...
2009-02-25
The detectives at the 1-2-5 investigate the murder of newspaper journalist Joey Conway. Sam is convinced the killer is the same criminal from a case in 2008. He is motivated by flashbacks to the case, which puts him at odds with his coworkers who think someone else is guilty.
Regisserat av:

13
Revenge of Broken Jaw 2009-03-04
Revenge of Broken...
2009-03-04
When the Weather Underground sends the department bomb threats on the anniversary of their leaders death, Lt. Hunt takes the threats personally. As Sam, Annie and Lt. Hunt investigate, they soon find a connection between a student and Pat Olsen, a professor.
Regisserat av:

16
Everyone Knows It's Windy 2009-03-25
Everyone Knows It's...
2009-03-25
Crime hits home after Ray and Chris are shot by a gang member. When the shooter is found dead near a bar, Sam becomes the lead suspect since he has been working undercover as part of the gang. With evidence mounting against him, Sam must search for the real killer before its too late for him
Regisserat av:

17
Life is a Rock 2009-04-01
Life is a Rock
2009-04-01
When Sam Tyler receives a phone call that presents him with three tasks he must perform so he can return to his life in the future, he must weigh his alternatives and decide whether to stay in 1973 or go home.
Regisserat av: