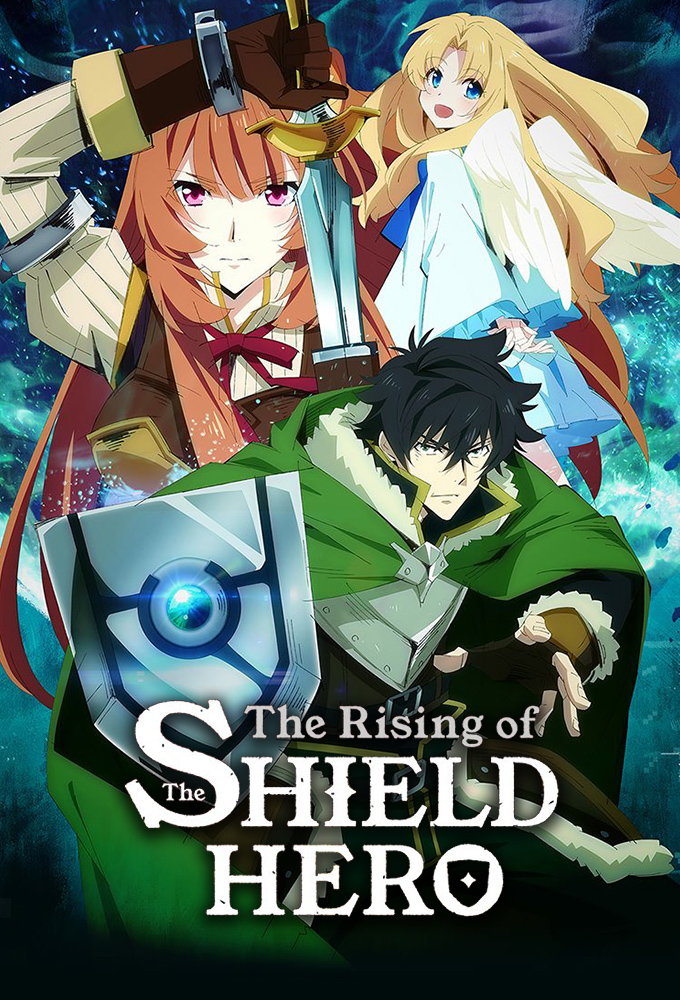 The Rising of the Shield Hero

(2019)
Originaltitel: Tate no Yuusha no Nariagari
Skapad av:
Release: 2019-01-09
TV-bolag: AT-X
Längd per avsnitt: 25 min min
Status: AVSLUTAD
Iwatani Naofumi was summoned into a parallel world along with 3 other people to become the worlds Heroes. Each of the heroes respectively equipped with their own legendary equipment when summoned, Naofumi received the Legendary Shield as his weapon. Due to Naofumis lack of charisma and experience hes labeled as the weakest, only to end up betrayed, falsely accused, and robbed by on the third day of adventure. Shunned by everyone from the king to peasants, Naofumis thoughts were filled... (TheTVDB)
Action Äventyr Anime Drama Fantasy

2
The Slave Girl 2019-01-16
The Slave Girl
2019-01-16
Naofumi follows the slave merchant to his store, where he looks for a partner to act as his sword. But all he has the money to buy is a diseased demi-human girl named Raphtalia, whom he then forces into an incredibly harsh battle.
Regisserat av:

3
Wave of Catastrophe 2019-01-23
Wave of Catastrophe
2019-01-23
Naofumi has obtained a whole load of abilities and skills, and his teamwork with Raphtalia is reaching perfection, too. To prepare for the incoming Wave, he upgrades their equipment and heads to the dragon hourglass to find out exactly when it will arrive. But there, he runs into Motoyasu and the...
Regisserat av:

4
Lullaby at Dawn 2019-01-30
Lullaby at Dawn
2019-01-30
The Wave is gone, but Naofumis relief is short-lived as Motoyasu challenges him to a duel in the middle of the celebratory banquet held in Melromarc Castle. Motoyasu insists that owning a slave is unbecoming for a hero and that Naofumi free Raphtalia at once.
Regisserat av:

5
Filo 2019-02-06
Filo
2019-02-06
After Aultcray reluctantly offers Naofumi a paltry reward, he heads to the slave merchant to redo the slave crest as per Raphtalias wishes. He also buys a monster egg there, which hatches a few days later and gives him a new party member. Meanwhile, Myne shows up in Lute Village, where theyre...
Regisserat av:

6
A New Comrade 2019-02-13
A New Comrade
2019-02-13
The mysterious girl that showed up out of nowhere was actually Filo. Shes a filolial queen with an advanced transformation ability, and she can even take human form thanks to it. However, her clothes get ripped every time she transforms, meaning Naofumi has to get her some magic clothes if he...
Regisserat av:

7
The Savior of the Heavenly Fowl 2019-02-20
The Savior of the...
2019-02-20
After hearing of a village thats in immediate need of herbicide, Naofumi and his party head there to do business. The village has been overrun by plants that have turned into monsters, and its residents were forced to abandon it. These plants can even take root in humans, and apparently Motoyasu is...
Regisserat av:

8
Curse Shield 2019-02-27
Curse Shield
2019-02-27
After hearing of a village in the East thats being ravaged by an epidemic, Naofumi and his party head there to deliver medicine. The epidemic was caused by the corpse of a dragon that had been killed a month before and left there to rot. Naofumis party accepts a job request to clean the corpse and...
Regisserat av:

9
Melty 2019-03-06
Melty
2019-03-06
In the Eastern village, Naofumi meets a girl named Melty. She instantly becomes friends with Filo and then requests to accompany the party on their journey. It seems she got separated from her guards. They travel together for a while, but when they reach the capital, they find...
Regisserat av:

10
In the Midst of Turmoil 2019-03-13
In the Midst of...
2019-03-13
After refusing to hear Melty out, Naofumi switches to planning for the next Wave. When a bunch of young soldiers ask to join his party, he agrees, but on a certain condition. At the same time, he also tries to upgrade Raphtalias class after she hits the level cap, but all he receives is harassment.
Regisserat av:

11
Catastrophe Returns 2019-03-20
Catastrophe Returns
2019-03-20
Naofumi faces another Wave, this time in a remote village. With the help of the soldiers who volunteered to join him, hes able to secure the safety of the villagers, but the Wave shows no signs of letting up. He heads to fight with the other heroes, only to find a giant ghost ship floating in the...
Regisserat av:

12
The Raven Invader 2019-03-27
The Raven Invader
2019-03-27
A mysterious woman showed up out of nowhere and destroyed the second Soul Eater in a single blow. She then proclaimed the start of the true battle of the wave and blew away the other three heroes when they attacked her. With Naofumis party proving ineffective as well, he decided to use the Rage...
Regisserat av:

13
The Devil of the Shield 2019-04-03
The Devil of the...
2019-04-03
Naofumi foils the attempt to take Meltys life and fights off the royal knights, but hes then framed for abducting Melty and killing several knights, so the party is forced to go on the run. With security tightened and checkpoints everywhere, the party receives a further blow that only makes things...

14
Everlasting Memory 2019-04-10
Everlasting Memory
2019-04-10
Due to Myne recklessly starting a forest fire, Naofumi and his party are forced to flee to a village at the base of the mountain. However, it wont be easy to break through the knights net. Melty suggests going to a noble she knows for help, and it just so happens that Raphtalias past is linked to...

16
Filolial Queen 2019-04-24
Filolial Queen
2019-04-24
As Naofumi and his party try to get the weakened kids to safety, Tyrant attacks them. Once Naofumi realizes that hes actually after Filo, he hatches a plan to lure him outside the city, but they cant even put a scratch on its massive body.

17
A Promise Made 2019-05-01
A Promise Made
2019-05-01
Fitoria tells Naofumi that shell kill all Four Cardinal Heroes if they dont get back on the same page. She even takes Melty hostage, but Naofumi continues to refuse. Understanding where hes coming from, Fitoria instead proposes a one-on-one duel with Filo.

19
The Four Cardinal Heroes 2019-05-15
The Four Cardinal...
2019-05-15
The Pope holds in his hands the ultimate weapon, which possesses the properties of all four cardinal weapons. Faced with its attack skill, Judgment, and its powerful defensive force field, Naofumi and gang are rendered helpless. As the crisis worsens, Motoyasu, who is now in line to be punished as...

21
Naofumi’s Triumphant Return 2019-05-29
Naofumi’s...
2019-05-29
After Naofumi survives thanks to Mirelias help, she comes to visit him and tells him the truth behind the summoning of the heroes and the discrimination against the Shield Hero. She also promises to clear his name, and holds a trial for Aultcray and Mynes crimes.

22
Four Heroes Council 2019-06-05
Four Heroes Council
2019-06-05
After being unable to for so long, Naofumi finally gets to upgrade his partys classes. He then takes part in a meeting of the Four Cardinal Heroes, held under the guise of a celebratory banquet. There, he learns of the existence of a bonus stage, with increased XP earnings. Meanwhile, Raphtalia...

23
Cal Mira Archipelago 2019-06-12
Cal Mira Archipelago
2019-06-12
On the ship to Cal Mira, Naofumi once again runs into Larc, who keeps throwing him off. However, the strange mans friendly nature shines through, and Naofumi quickly takes a liking to him. After having a fun time grinding levels and a lively meal, Naofumi feels happy and fulfilled for the first...

24
Guardians of Another World 2019-06-19
Guardians of...
2019-06-19
Melromarc brings a large fleet to fight the Wave out at sea. While the queen takes charge and leads the operation well, the other three heroes prove useless yet again, leaving Naofumi to do it all alone. Later, he gets help from Larc and Therese to fend off the monsters, but then...

25
The Rising of the Shield Hero 2019-06-26
The Rising of the...
2019-06-26
It turns out that Glass, like Larc, is also a hero from other world. Naofumi barely fights off their combo attacks and then corners Glass in a one-on-one battle, but is then faced with an all-important question: does he truly wish to protect this world?