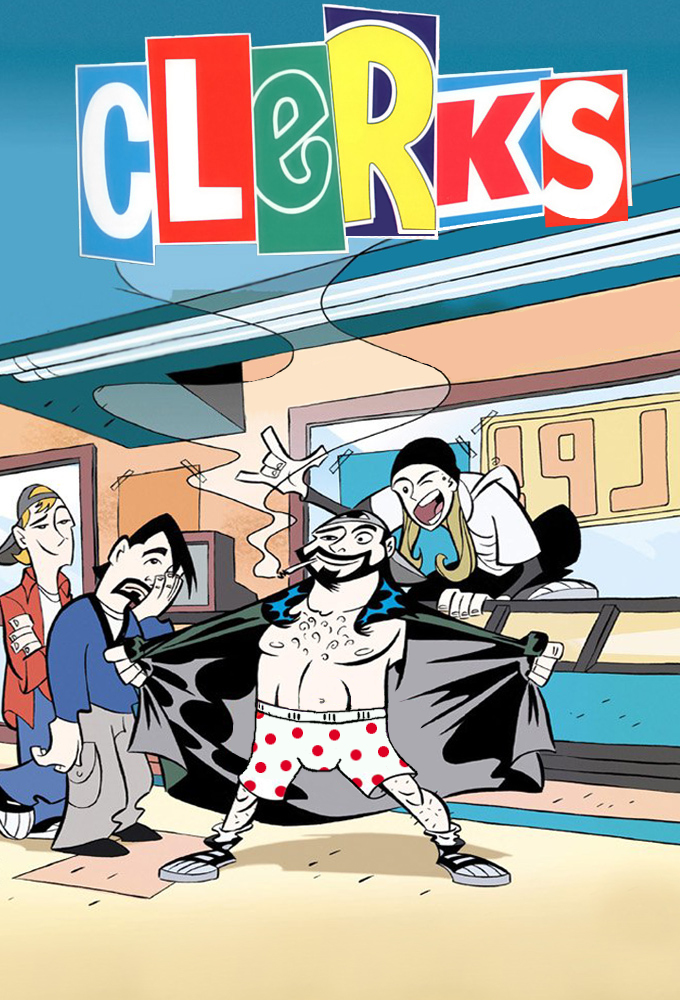 (2000)
Originaltitel: Clerks
Release: 2000-05-01
TV-bolag: ABC
Längd per avsnitt: 30 min min
Status: AVSLUTAD
This animated series, based on Kevin Smiths 1994 film of the same name, centers on Dante Hicks and Randal Graves, the clerks at The Quick Stop and RST Video. These slackers spend most of their time spoofing pop culture and whining about their miserable lives. Adding color to their lives are the resident hetero-life partners Jay and Silent Bob, who hang out and sell fireworks outside the store. (TheTVDB)
Animerat Komedi

2
The Clipshow Wherein Dante and Randal... 2000-06-07
The Clipshow...
2000-06-07
Randal and Dante are accidentally locked in the freezer at Qwik Stop while testing the locks. They spend the day reminiscing about such things as the opening of a new convenience store across the street, the last time they got locked in the freezer, Randals mail order husband, celebrities that have...
Regisserat av:

3
Leonardo Is Caught in the Grip of an... 2002-12-14
Leonardo Is Caught...
2002-12-14
Dante and Randal read fan mail and introduce a new black character, Lando. Randal neglects a shipment of frozen burritos. A new pet store opens next door, and Patrick Swayze works there. Randal fears an outbreak after Leonardo Leonardo is bitten by a monkey and gets food poisoning from the...
Regisserat av:

5
Dante & Randal & Jay & Silent Bob and a... 2002-12-14
Dante & Randal &...
2002-12-14
Dante and Randal go to their 10 year high school reunion, while Leonardo attends his 30th. All of Randals ex-girlfriends are now lesbians while Dantes baseball team doesnt remember him. Leonardo offers Dante the chance to coach a little league team, while Randal beats the Pharoah video game and is...
Regisserat av:

6
The Last Episode Ever 2002-12-14
The Last Episode...
2002-12-14
Randal and Dante visit a comic con, where people encourage them to be more true to the movie. Back at the store, Dante prepares for a date with Caitlin Bree. A fair springs up across the street and Jay and Silent Bob cant keep themselves from rushing in every 2 minutes to bring news while Randal...
Regisserat av: