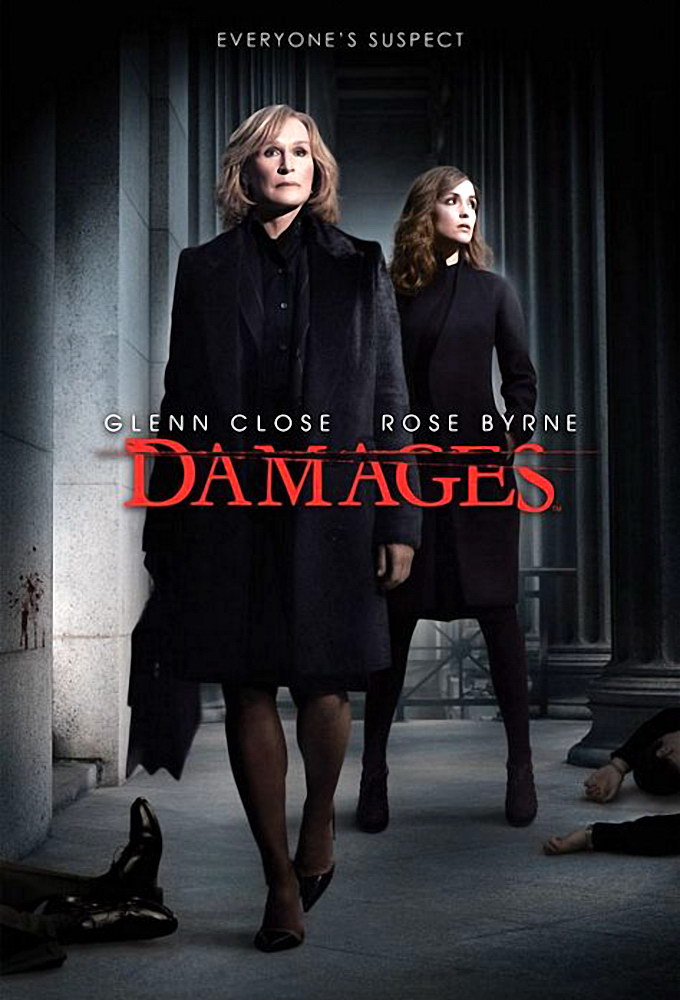 (2007)
Originaltitel: Damages
Skapad av: Glenn Kessler / Todd A. Kessler / Daniel Zelman
Release: 2007-07-24
TV-bolag: FX
Längd per avsnitt: 60 min min
Status: AVSLUTAD
Set in New Yorks world of high stakes litigation, Damages follows the lives of Patty Hewes (Glenn Close), the nations most revered and most reviled litigator, and her bright, ambitious protege Ellen Parsons (Rose Byrne) as they become embroiled in a class action lawsuit targeting Arthur Frobisher (Ted Danson), one of the countrys wealthiest CEOs. As Patty battles Frobisher and his attorney, Ellen learns what it takes to win at all costs -- and that lives, not just fortunes, are at... (TheTVDB)
Crime Drama Mysterium Thriller

SPECIAL
1
2
3
4
5
SÄSONG 1

1
Get Me a Lawyer 2007-07-24
Get Me a Lawyer
2007-07-24
Attorney Patty Hewes hires a new associate, Ellen Parsons, to help her as she tries to ruin Arthur Frobisher. Hewes represents a group of employees that are suing Frobisher after he sold his company, leaving the employees devastated. Ellen is unaware that her best friend, Katie Connor, is working...
Regisserat av:

3
And My Paralyzing Fear of Death 2007-08-07
And My Paralyzing...
2007-08-07
Patty receives a mysterious threat at her office that could destroy her case against Arthur Frobisher. Ellen continues to struggle with the demands of her new job at Hewes and Associates.
Regisserat av:

5
A Regular Earl Anthony 2007-08-21
A Regular Earl...
2007-08-21
Tom Shayes considers his options as Patty continues to strain to keep her clients happy. Arthur tells Ray that he needs to put more pressure on Patty to make the case go away.
Regisserat av:

6
She Spat at Me 2007-09-04
She Spat at Me
2007-09-04
Patty tries to find out what Gregory knows about the case. Arthur Frobisher tries a new strategy to save his family and his money. David and Ellen have strains on their relationship as Lila tries to reenter Davids life.
Regisserat av:

7
We are Not Animals 2007-09-11
We are Not Animals
2007-09-11
Tom and Ellen think that Patty is trying to control them so they decide to make an alliance and keep information from her. Patty must keep Gregory Malina secure until his deposition because her case will fall apart without it.
Regisserat av:

8
Blame the Victim 2007-09-18
Blame the Victim
2007-09-18
Ellen gets some bad news from her parents. Arthur Frobisher and his team do everything they can to keep things going their way while a witness remains missing.
Regisserat av:

11
I Hate These People 2007-10-09
I Hate These People
2007-10-09
Patty offers Ellen her job back, however, Ellen declines but volunteers to keep helping Patty with the Frobisher case. Lila is back, and bringing more havoc into David and Ellens lives. Patty uses the newly acquired evidence to blackmail Ray, and offers him an ultimatum.
Regisserat av: