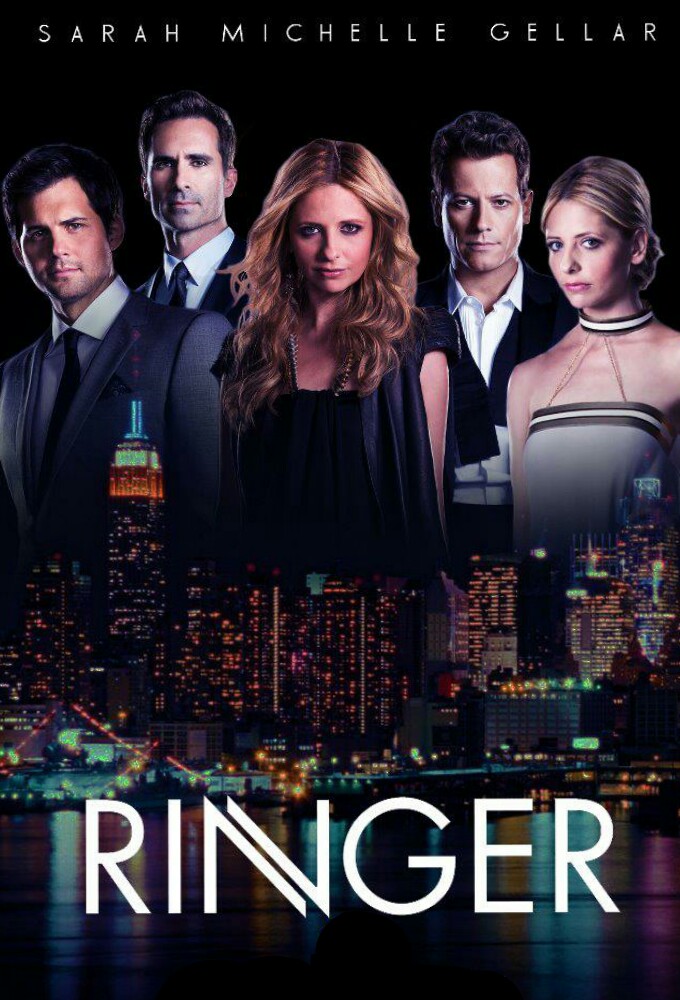 (2011)
Originaltitel: Ringer
Skapad av: Eric C. Charmelo / Nicole Snyder
Release: 2011-09-13
TV-bolag: The CW
Längd per avsnitt: 40 min min
Status: AVSLUTAD
Bridget goes on the run after witnessing a murder, hiding out by assuming the life of her wealthy identical twin sister Siobhan - only to learn that her sisters seemingly idyllic life is just as complicated and dangerous as the one shes trying to leave behind. (TheTVDB)
Crime Drama Mysterium

1
SÄSONG 1

1
Pilot 2011-09-13
Pilot
2011-09-13
Bridget Kelly is six-months sober and starting to turn her life around when she is the sole witness in a murder trial. Despite the assurances of her FBI protector, Agent Victor Machado, Bridget knows her life is on the line. She flees to New York, telling no one, and reunites with her estranged...
Regisserat av:

2
She's Ruining Everything 2011-09-20
She's Ruining...
2011-09-20
Bridgets old life begins to catch up with her, as FBI Agent Machado decides to stay in New York and learn more about Siobhans life and inner circle.
Regisserat av:

3
If You Ever Want a French Lesson 2011-09-27
If You Ever Want a...
2011-09-27
Things get tense between Bridget and Andrew after she uncovers some information about him; Agent Machado looks for Bridget; Henry and Gemma argue over an investment.
Regisserat av:

5
A Whole New Kind of Bitch 2011-10-11
A Whole New Kind of...
2011-10-11
Gemma (Tara Summers) asks Bridget (Sarah Michelle Gellar), who is still posing as Siobhan, to do her a favor that could cost Bridget everything. Henry (Kristoffer Polaha) is given some crushing news about his writing career, and Andrew (Ioan Gruffudd) has to deal with his tumultuous relationship...
Regisserat av:

6
The Poor Kids Do It Every Day 2011-10-18
The Poor Kids Do It...
2011-10-18
When Bridget cannot get in touch with Gemma she begins to wonder if something has happened between Gemma and Henry. Juliet starts a new school, where she defends herself against the school bully and her teacher Mr. Carpenter comes to her rescue. Bridget asks Charlie to do her a favor that could...
Regisserat av:

7
Oh Gawd, There's Two of Them? 2011-11-01
Oh Gawd, There's...
2011-11-01
Still posing as Siobhan, Bridget is forced to reveal she has a twin to Andrew and Henry when Agent Machado starts closing in. Henry becomes a suspect in the whereabouts of his wife, Gemma and Juliet starts partying to dangerous extremes. Meanwhile, Malcolm escapes and is on the run from his...
Regisserat av:

8
Maybe We Should Get a Dog Instead 2011-11-08
Maybe We Should Get...
2011-11-08
Andrew and Bridget are told some upsetting news that also affects Henry. Juliet continues to form an unlikely bond with her teacher Mr. Carpenter and Malcolm shows up in New York, where Agent Machado confronts him. Meanwhile, Siobhans relationship with Tyler is jeopardized.
Regisserat av:

9
Shut Up and Eat Your Bologna 2011-11-15
Shut Up and Eat...
2011-11-15
Bridget begins to realize she is developing feelings for Andrew, while Henry and Andrew’s business partner Olivia bond over common interests. Malcolm is suspicious of Bridget’s new NA sponsor Charlie and Bridget makes an appointment with Siobhan’s therapist, hoping it will help her discover...
Regisserat av:

10
That's What You Get for Trying to Kill... 2011-11-29
That's What You Get...
2011-11-29
Henry begins to target someone as a suspect in the disappearance of his wife Gemma and realizes he must work with Bridget to find out more information. Malcolm talks to the police about his suspicion of Charlie, while Juliet develops an unhealthy obsession with her teacher Mr. Carpenter....
Regisserat av:

11
It Just Got Normal 2012-01-31
It Just Got Normal
2012-01-31
Bridget offers to host a fundraiser that her friend Greer is holding for Juliets school and discovers that Greer knew one of Siobhans deep dark secrets. While back in New York, Siobhan discovers that Bridget has settled into her former life more easily than Siobhan expected and she is determined to...
Regisserat av:

12
What Are You Doing Here, Ho-Bag? 2012-02-07
What Are You Doing...
2012-02-07
Juliet’s mother Catherine arrives in town, where she proceeds to wreak havoc on Andrew and Bridget’s relationship. Bridget discovers someone from Siobhan’s past and thinks he might be the key to her learning more information about her sister. Meanwhile, Henry discovers a lead that causes...
Regisserat av:

13
It's Easy to Cry, When This Much Cash... 2012-02-14
It's Easy to Cry,...
2012-02-14
Bridget visits some of the last locations Siobhan went before she disappeared and discovers that Siobhan kept a secret office. Olivia finds out some information about Henry and blackmails him into introducing her to Gemma’s wealthy father Tim Arbogast. Meanwhile, in Paris, Tyler struggles with a...
Regisserat av:

14
Whores Don't Make That Much 2012-02-21
Whores Don't Make...
2012-02-21
Bridget encounters Dylan, who was an important part of the sisters’ past. After finding something in Henry’s possession that belongs to Bridget, Malcolm befriends Henry to keep an eye on him. Catherine asks Andrew to make a big decision regarding Juliet that could change their family dynamic.
Regisserat av:

16
You're Way Too Pretty to Go to Jail 2012-03-06
You're Way Too...
2012-03-06
Machados past with stripper Shaylene Briggs is revealed; Siobhan masquerades as Bridget to Malcolm; Henry realizes that Bridget knows more than she should; and Tyler takes something from Siobhan thats a key piece of evidence in her revenge plot.

17
What We Have is Worth the Pain 2012-03-13
What We Have is...
2012-03-13
Bridget fears that something has happened to Malcolm when she cannot get in touch with him.. In an effort to find him, Bridget visits the hotel where Malcolm was staying and discover on security footage that Andrew was the last person to see Malcolm before he disappeared. Meanwhile, Juliet...
Regisserat av:

18
That Woman's Never Been a Victim Her... 2012-03-20
That Woman's Never...
2012-03-20
After an attempt is made on Bridget’s life, Agent Machado is determined to find who was responsible. Henry accuses Siobhan of putting a hit out on Bridget, while Bridget thinks Olivia was behind it. Meanwhile, Andrew admits to asking Malcolm to leave town and Juliet goes missing.
Regisserat av:

19
Let's Kill Bridget 2012-03-27
Let's Kill Bridget
2012-03-27
Bridget decides that the only way she will feel safe is if she testifies against Bodaway Macawi. Agent Machado gets suspended from the FBI, while Henry grows impatient with Siobhan’s plan and tells her she needs to let go of her revenge plot or they cannot be together.
Regisserat av:

20
If You're Just an Evil Bitch Then Get... 2012-04-03
If You're Just an...
2012-04-03
Still posing as Siobhan, Bridget admits to Agent Machado that someone tried to kill her months earlier and she thought it was Andrew. Bridget goes to Henry’s apartment, where Siobhan overhears Bridget accuse Henry of Tyler’s murder. Meanwhile, Catherine goes to desperate extremes to bring...
Regisserat av:

21
It's Called Improvising, Bitch! 2012-04-10
It's Called...
2012-04-10
Catherine’s plan to drive Andrew and Bridget, posing as Siobhan, apart unravels. Agent Machado discovers who wanted to kill Siobhan all along and rushes to intercept the killer before it is too late. Meanwhile, Siobhan’s plan to help Henry backfires when the main witness suddenly dies.
Regisserat av: