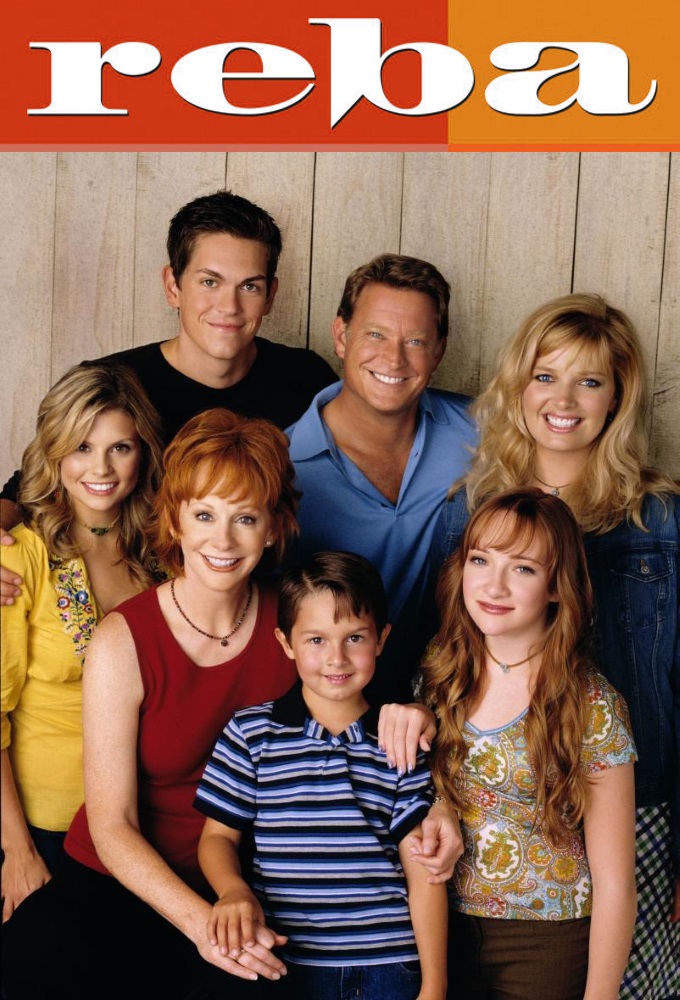 (2001)
Originaltitel: Reba
Skapad av: Allison M. Gibson
Release: 2001-10-01
TV-bolag: The WB
Längd per avsnitt: 30 min min
Status: AVSLUTAD
Being a single mom in todays world is a daunting task. For Reba Hart (Reba McEntire), parenthood encompasses not only watching over three kids, but also keeping an eye on a son-in-law, a granddaughter, an ex-husband, and an ex-husbands neurotic wife. Reba began with the Hart family in the midst of a divorce as Texas soccer mom Reba watched her white-picket-fenced world collapse before her very eyes. Her dentist husband, Brock(Christopher Rich), left her after what she thought was 20... (TheTVDB)
Komedi Drama

1
2
3
4
5
6
SÄSONG 1

1
Pilot 2001-10-05
Pilot
2001-10-05
The Harts are in court-ordered therapy. As the story unfolds, Brock and Reba reveal that they are separated due to Brocks midlife crisis and while in court the entire family â€” Reba, Brock, Cheyenne, Jake and Kyra â€” got into what the judge described as a brawl. While in therapy Brock...
Regisserat av:

2
The Honeymoon's Over or Now What? 2001-10-12
The Honeymoon's...
2001-10-12
The high schools principal Mrs. Hodge calls Reba and Brock into her office to give them a brochure on an alternative school for pregnant mothers, called Hollyhouse, that she feels Cheyenne should attend. When Reba returns to say that Cheyennes decision is to stay in her regular high school the...
Regisserat av:

3
Someone's at the Gyno with Reba 2001-10-19
Someone's at the...
2001-10-19
Van has finally moved some of his stuff (that his parents thoughtfully threw out on their front lawn for him) into the room he shares with Cheyenne. Unfortunately, most of its either in bad taste or just downright unacceptable (like the cheerleaders poster). But when Cheyenne doesnt object, Reba...
Regisserat av:

4
You Make Me Sick 2001-10-26
You Make Me Sick
2001-10-26
Cheyenne is experiencing morning sickness for the first time and Van is tired of her vomiting. Reba suspects that a neighbor does not want her son hanging out at Rebas house with Jake because of all the objectionable things that go on. Brock convinces Van that Cheyennes morning sickness is mental...
Regisserat av:

5
The Steaks Are High 2001-11-02
The Steaks Are High
2001-11-02
After being named player of the week, Van begs Reba to host the pre-game dinner for the football team since his family wont even talk to him. When she finally gives in, he and Cheyenne are so excited she cant help but look forward to it... that is, until Brock and BJ arrive with the bible for team...
Regisserat av:

6
The Man and the Moon 2001-11-09
The Man and the Moon
2001-11-09
Her kitchen garbage disposal is on the blink again and Reba refuses to call Brock to fix it like he used to do when he still lived at home. She tries to fix the disposal herself but only makes it worse. Giving in, she calls a handyman. Bill (guest star Greg Evigan â€” B.J. and the Bear) takes...
Regisserat av:

8
Don't Know Much About History 2001-12-07
Don't Know Much...
2001-12-07
What Reba didnt want to hear: forsaken her clarinet. Reba suspects theres more to the story than Kyra saying shes grown out of her old instrument. Van returns from school and announces that hes failed his history mid-term. Brock arranges for Van to retake the test so he can pass and still play...
Regisserat av:

9
Every Picture Tells a Story 2001-12-14
Every Picture Tells...
2001-12-14
Her best friend Lori Ann (guest star Park Overall) shows up at the door and announces that shes moving back to town. They recall their crazy single days and Lori Ann announces that now theyre both divorced (probably the third time for her), its time they hit the town. Lori Ann gets a glimpse of how...
Regisserat av:

10
When Good Credit Goes Bad 2002-01-11
When Good Credit...
2002-01-11
Shes having a decadent lunch with Lori Ann after a day of shopping and offers to pay, claiming its a celebration since her divorce is final in a month. The waitress comes back to table to say that her credit card has been declined. When Reba gets home and calls the credit card company to report her...
Regisserat av:

11
Meet the Parents 2002-01-18
Meet the Parents
2002-01-18
Rebas parents (guest stars Barry Corbin, Northern Exposure and Dorothy Lyman, The Bold and the Beautiful) are celebrating their 46th wedding anniversary. Theyre taking a vacation and on the way they plan on stopping by Rebas to see the family. Rebas excited about her parents visit until her mom...
Regisserat av:

12
A Mid-Semester's Night Dream 2002-01-25
A Mid-Semester's...
2002-01-25
She announces at breakfast that she has a new position as a substitute teacher at the high school. Cheyenne is mortified that her mothers going to be around, but Reba assures her that she put Brock through dental school by teaching and shes always intended to go back to it. Cheyenne wont even know...
Regisserat av:

13
Brock's Swan Song 2002-02-01
Brock's Swan Song
2002-02-01
Cheyenne and Van are going to get the ultrasound that will tell them the sex of the baby. Brock arrives and announces that his father John D. has died. Apparently he was on the golf course when a swan kept interrupting his putting. He took a swing at the swan and had a heart attack. Its clear that...
Regisserat av:

14
The Story of a Divorce 2002-02-15
The Story of a...
2002-02-15
When Reba receives her final divorce papers, Lori Ann persuades her to get back into action and start dating. Lori Ann runs through her list of eligible men on her palm pilot and digs up Rebas former boyfriend from college, Parker Reynolds. Reba cant remember why she ever broke up with him and...
Regisserat av:

15
You May Kick the Bride 2002-02-22
You May Kick the...
2002-02-22
Barbra Jean is finally going to have her dream wedding to Brock. Theres just one problem: a case of the pre-wedding jitters has hit the bride and she turns to Reba for help. BJ wants Rebas blessing for her marriage to Brock and for the wedding itself. Eventually Reba consents to BJs request because...
Regisserat av:

16
Vanny Dearest 2002-03-15
Vanny Dearest
2002-03-15
Van is named the football player of the year and the only thing that would make his moment complete is to have his parents there. Reba tries to convince the Montgomerys to mend the rift with their son over his marriage to Cheyenne. Vans mom Sue attends the awards ceremony, and being so moved by her...
Regisserat av:

17
He's Having a Baby 2002-04-12
He's Having a Baby
2002-04-12
Van and Cheyenne have signed up for Lamaze classes so they are ready when the baby comes. But, Cheyenne has to finish a term paper for school and cant attend. Reba steps in as a temporary Lamaze partner for Van but is horrified to find out that Brock and Barbra Jean are in the same class.
Regisserat av:

18
She Works Hard for Their Money 2002-04-19
She Works Hard for...
2002-04-19
Reba throws a baby shower for Cheyenne. She warns Brock to get the kids something practical, rather than the big screen TV he had planned on buying. At the end of the shower Reba gives Cheyenne a quilt she spent the last 8 months making out of Cheyennes old baby clothes. Then Brock walks in and...
Regisserat av:

19
Labor of Love 2002-04-26
Labor of Love
2002-04-26
Both Barbra Jean and Cheyenne are due to have their babies in the next few weeks. Brock is canceling his annual camping trip because he promised BJ that hed be there when she went into labor. The University of Southern California is courting Van for their football team. Brock is happy with the idea...
Regisserat av:

20
The King and I 2002-05-03
The King and I
2002-05-03
Cheyenne and Van are nominated for Prom Queen and King. Everyones surprised by the students overlooking Cheyennes pregnancy and nominating her anyway. Cheyennes so excited because she feels like did before she was pregnant. Van finds out that the mean but beautiful cheerleader will most likely win...
Regisserat av:

21
Up a Treehouse with a Paddle 2002-05-10
Up a Treehouse with...
2002-05-10
Brock has once again fallen back on a promise he made to Jake by missing a soccer game. Jake scored his first goal (okay, so it was on his own team) and Brock missed it. Feeling guilty because hes spending so much of his time helping with the baby and keeping his dental practice going, Brock...

22
It Ain't Over till the Red-Head Sings 2002-05-10
It Ain't Over till...
2002-05-10
Van and Cheyenne, who is nearing her due date and having trouble moving around, are excited about their upcoming graduation day. They tell Brock, BJ and Reba they want to be in the delivery room by themselves because its about time they take reponsibility for things. Rebas hurt but takes the news...
Regisserat av: