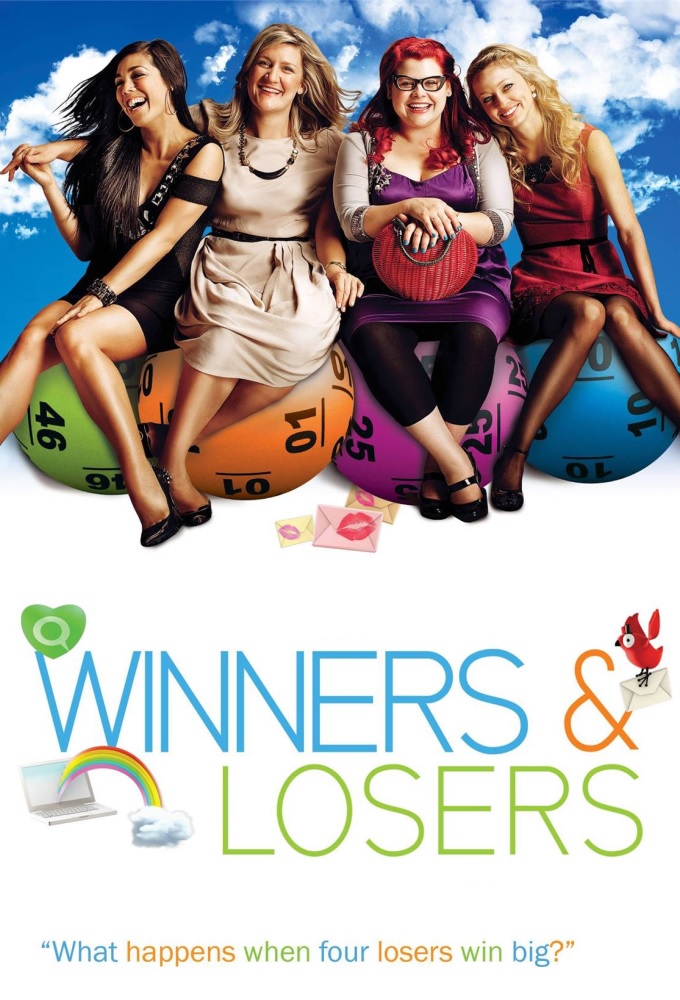 1
2
3
4
5
SÄSONG 1

1
Covert Aggression in Netball 2011-03-22
Covert Aggression...
2011-03-22
Four old friends from high school have little in common, besides the fact that they were the losers in high school who tried to avoid the attentions of the popular school bully, Tiffany Turner. Now twenty seven-years-old and content with their lives, the friends receive a surprise invite to their...
Regisserat av:

2
Those People in the Paper 2011-03-29
Those People in the...
2011-03-29
As Bec, Frances and Sophie celebrate their eight million dollar lottery win, Jenny reacts badly to missing out. Despite Becs best attempts to help talk Sophie and Frances into sharing, Jennys over-the-top rant seemingly seals her fate. But when a series of events leads the girls to question the...
Regisserat av:

3
Reality Bites 2011-03-29
Reality Bites
2011-03-29
As the arrival of the money looms, the reality of the win forces Bec, Jenny, Frances and Sophie to reassess direction of their lives. A misunderstanding, a friendship challenged and a relationship on the brink forces them all to make some life altering decisions.
Regisserat av:

4
Worlds Collide 2011-04-05
Worlds Collide
2011-04-05
Jenny throws a party to celebrate Bec and Matt setting the wedding date. The event brings everyone together for the first time - and with it, more than a few surprises. The morning after the night before sees all the girls dealing with ramifications of the evening, before Bec makes a shock...
Regisserat av:

5
Fascinator Rhythm 2011-04-12
Fascinator Rhythm
2011-04-12
The girls take to the fields on Race Day. Launching their new business, Zach and Frances have organised a marquee, but some nasty advice from one of Zachs former female colleagues leaves Frances wondering if her new partner can be trusted. Meanwhile, a coincidental meeting with a former university...
Regisserat av:

6
Peace of the Past 2011-04-19
Peace of the Past
2011-04-19
Bec is faced with a tough choice when Tiffany Turner reveals her life is in tatters and risks losing custody of her four year old son. All she needs is cash for a lawyer. Bec is left torn. Jenny doesnt buy Tiffanys sob story and advises Bec not to give her the money. Against her better judgement,...
Regisserat av:

7
Like A Virgin 2011-05-03
Like A Virgin
2011-05-03
When Bec, Frances and Sophie swap stories of their first time Jenny is forced to admit shes still a virgin. Sick of feeling like its a noose around her neck, Jenny sets out to find a man to do the deed with. Frances is stunned to realise she has romantic feelings for Zach. Jonathan insists its been...
Regisserat av:

8
Secrets and Lies 2011-05-10
Secrets and Lies
2011-05-10
Bec confronts Matt and demands to know if he really wants to marry her. Meanwhile, Francess feelings for Zach start to get the better of her. Then, Sophies lawyer presses her for information to provoke sympathy from the judge, but Sophie keeps certain details to herself.
Regisserat av:

9
One Door Opens 2011-05-17
One Door Opens
2011-05-17
Bec grapples with her suspicions over Matts fidelity. Despite trying not to think the worst, Bec finally confronts him. Sophie faces the demons of her past but her increasingly reclusive lifestyle begins to affect her relationships with her friends. After shutting everyone out, Doug finally gets...
Regisserat av:

10
Countdown 2011-05-24
Countdown
2011-05-24
Bec and Matts dinner proves to be a night of highs and lows for the four friends as they navigate very different romantic entanglements. Frances still has no clue how Zach feels about her dating his dad, Sophie is worried that Doug is distancing himself from her, and Jenny is falling hard for Rhys,...
Regisserat av:

11
Smelling the Roses 2011-05-31
Smelling the Roses
2011-05-31
When Bec experiences an emotional breakdown, Jenny and Mrs Gross are there to support her, but its Matt she really wants to see. JBs frustrated as Sophie negates his attempts to get to know her better. Will Sophie eventually let her guard down? Meanwhile, Frances is left to babysit Jonathans niece...

12
Out of Left Field 2011-06-07
Out of Left Field
2011-06-07
As a power failure hits the inner city, two relationships bloom and two unravel. A week after her breakdown, Becs just getting back to herself when she sees Matt with another woman. Jenny is adamant about impressing Rhyss parents, but Rhys has a secret, and Jenny is devastated when she discovers...

15
Happiness is a Delusion 2011-06-28
Happiness is a...
2011-06-28
Somewhat splintered following the accident, the girls each grapple with their own separate game of real-life charades. Seduced by the lure of popularity and acceptance, Jenny throws herself further into Seans party world, raising concerns for the Gross family. When Zachs grandparents arrive...

17
The Pink Dog 2011-07-12
The Pink Dog
2011-07-12
When Jenny and her siblings notice Mrs Gross behaving in an unusual manner, they discuss the option that she could be menopausal.

18
Mums the Word 2011-07-19
Mums the Word
2011-07-19
Jenny struggles to keep a dark secret from her siblings concerning her mums health, and Bridget and Wes announce some exciting news.

19
We Are Family 2011-08-02
We Are Family
2011-08-02
Zach organises a weekend away with Frances and Jonathan to discuss a strategy for their next big pitch. But with Sophie tagging along at the last minute, work takes a back seat as the foursome enjoy some fun and relaxation. Meanwhile, with Mrs Grosss impending surgery on everyones mind, the Gross...

21
Eat, Pray, Love 2011-08-16
Eat, Pray, Love
2011-08-16
Mrs Grosss surgery is a success and Jenny is forced to revisit her promise to God that if her mum got better shed give her money away. Meanwhile, Doug is offered a job in London, but now that Dougs single, Sophie wonders if the timings right for them to be together. Also, Matt doesnt want to make...

22
Second Chances 2011-08-23
Second Chances
2011-08-23
Wedding bells ring as Bec and Matts happy day finally arrives. Bec struggles to pull it together after her Hens Night, but once shes in her dress she feels as though nothing could go wrong... Happy with Zach, Frances remains oblivious to Claires true intentions, and their relationship bliss only...