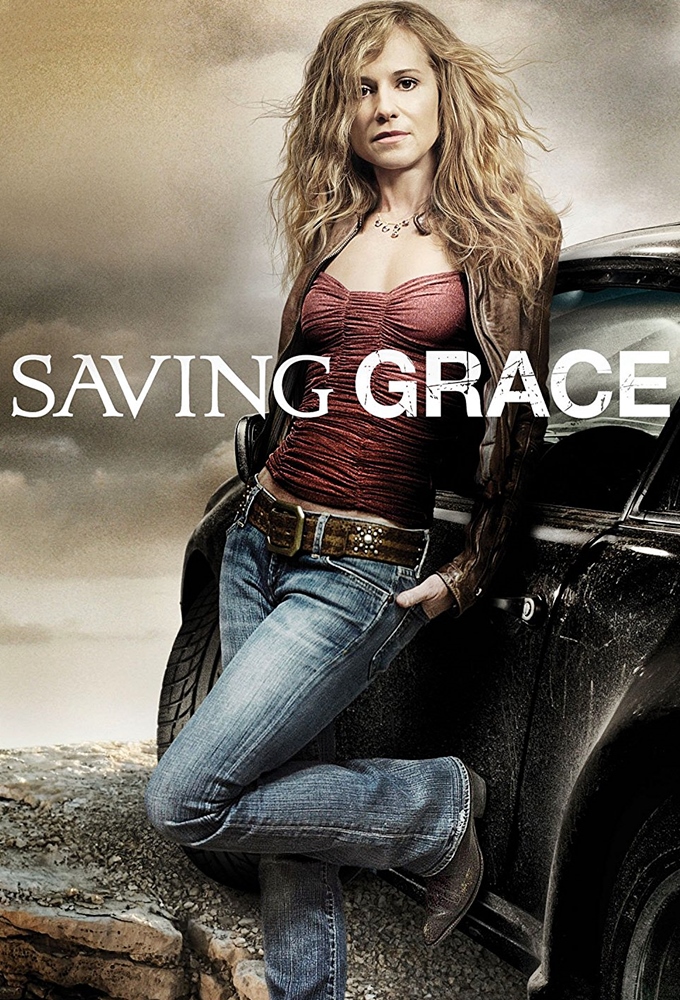 (2007)
Originaltitel: Saving Grace
Skapad av: Nancy Miller
Release: 2007-07-23
TV-bolag: TNT
Längd per avsnitt: 60 min min
Status: AVSLUTAD
Academy Award winner Holly Hunter, making her television series debut, stars in this TNT drama series about a police detective with an emotional crisis living in Oklahoma City. A respected officer, Grace Hanadarko cant seem to run her personal life with the same sort of finesse she has in the field. Can a unlikely divine stranger influence her to get her life back on track? (TheTVDB)
Drama

1
2
3
SÄSONG 1

1
Pilot 2007-07-23
Pilot
2007-07-23
Grace Hanadarko is an Oklahoma City police detective with an alcohol problem and a self-destructive lifestyle. After she hits a man with her car while driving drunk, she asks God for help and an angel named Earl appears. Earl wants to help her find the right path of life again, but it is going to...
Regisserat av:

2
Bring It On, Earl 2007-07-30
Bring It On, Earl
2007-07-30
Grace and her team investigate the murder of an oilman. Meanwhile, Ham discovers Graces romantic past with Butch Stillwater, which puts a strain on their relationship. Grace sets out to prove her courage by challenging Earl to a wrestling match.
Regisserat av:

3
Bless Me, Father, for I Have Sinned 2007-08-06
Bless Me, Father,...
2007-08-06
Grace and her team investigate the murder of a manager of a sleazy local motel. The investigation eventually leads to a maid, who claims the victim was trying to rape her. Complications arise when a local priest offers her the right of sanctuary. Meanwhile, Grace begins to accept Earls presence in...
Regisserat av:

4
Keep Your Damn Wings Off My Nephew 2007-08-13
Keep Your Damn...
2007-08-13
A 17-year-old devout Christian comes under attack just days before he’s scheduled to testify in a murder trial. In order to ensure his safety, Grace allows him to move in with her. But Grace can only handle so much preaching, so she ropes the guys into helping her watch over him. Grace gets...
Regisserat av:

5
Would You Want Me To Tell You? 2007-08-20
Would You Want Me...
2007-08-20
Grace and Ham play cops and robbers with toy guns. Grace’s favorite Aunt Cathy comes to town – has a run in with Earl, clashes with Betty – and reveals some shocking news. But first-- Rhetta, Grace, and Aunt Cathy get drunk and remember old times. Meanwhile, cattle tycoon Alvin Green’s...
Regisserat av:

6
And You Wonder Why I Lie 2007-08-27
And You Wonder Why...
2007-08-27
The death of an alleged call girl in a flight attendant’s uniform leads Grace and the guys to investigate a notorious Oklahoma crime family. Grace is finally confronted by Ham’s wife about the affair. A financially-strapped Rhetta gets excited about making two grand as an expert witness. And...
Regisserat av:

7
Yeehaw, Geepaw 2007-09-03
Yeehaw, Geepaw
2007-09-03
Grace and the guys investigate the murder of a “crispy critter” in the Oklahoma countryside and Bobby soon discovers the deceased was one of his mentees. Grace enlists the help of her Native American grandfather, “Geepaw,” to help with the case, but is shocked when she sees how quickly his...

8
Everything's Got a Shelf Life 2007-09-10
Everything's Got a...
2007-09-10
During the raid on a killers house, Grace gets shot and almost dies, while another policeman isnt as lucky as her and gets shot to death. Meanwhile, Leon Cooley has to deal with his ex-wife marrying another man, who might adopt his son.
Regisserat av: