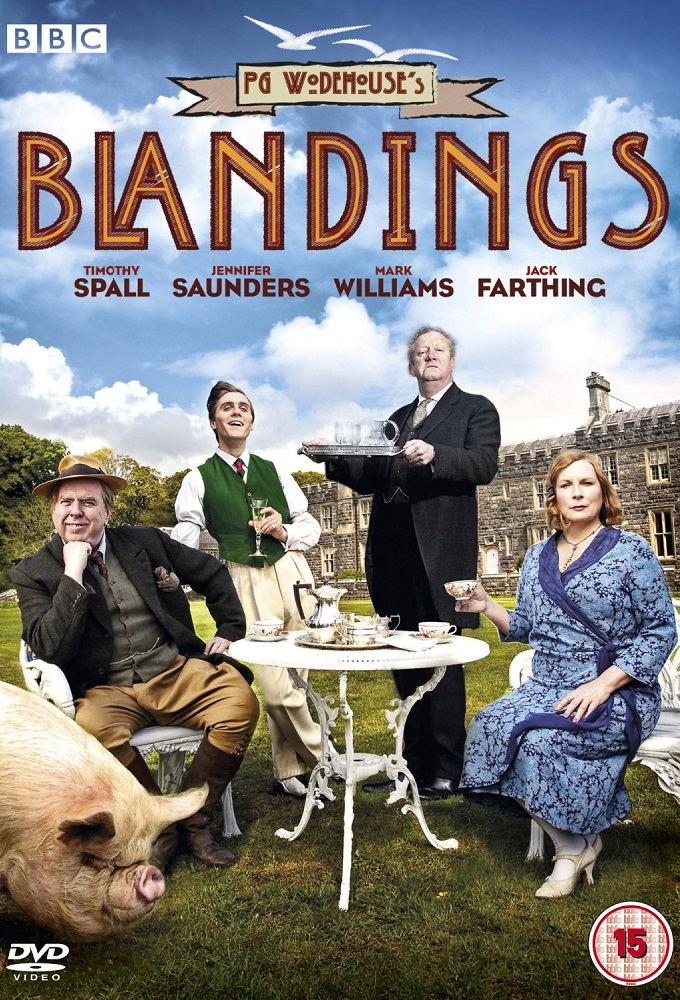 (2013)
Originaltitel: Blandings
Release: 2013-01-13
TV-bolag: BBC One
Längd per avsnitt: 30 min min
Status: AVSLUTAD
Set in 1929 in the fictional Blandings Castle, Timothy Spall plays the amiable but permanently distracted Lord Emsworth - known to his friends as Clarence - in what should be a cracking new adpatation of some much-loved tales by PG Wodehouse. The series is bound to win a whole new and well-deserved audience for Wodehouse, the great comic writer whose dates were 1881-1975. He has a host of fans, not least among them, writers and actors like Stephen Fry and Simon Callow, and indeed our... (TheTVDB)
Komedi

2
The Go-Getter 2013-01-20
The Go-Getter
2013-01-20
Connie hires a personal secretary, Baxter, to tidy up Blandings and Clarence and to impress the visiting Schoonmakers. But Freddies attempts to sell them dog food contribute to the extreme discomfort of the occasion.
Regisserat av:

3
Company for Gertrude 2013-01-27
Company for Gertrude
2013-01-27
Clarence hopes to avoid dancing with his niece Gertrude by inviting a convenient blockhead to keep her company. Freddie meanwhile must keep his new Portuguese wife a secret from Connie. Guest starring David Bamber as Herr Schnelllhund. Clarence’s lugubrious niece Gertrude has been imprisoned at...
Regisserat av:

5
Lord Emsworth and the Girl Friend 2013-02-10
Lord Emsworth and...
2013-02-10
It is the annual fete at Blandings Castle, and Connie will again force Clarence to wear a revolting top hat and stumble his way humiliatingly through a speech. Worst of all, he is banned from picking his beloved flowers by the tyrannical head gardener Angus McAllister. However, Clarence befriends...
Regisserat av:

6
Problems with Drink 2013-02-17
Problems with Drink
2013-02-17
Clarence is forced to make polite conversation with the dowager Lady Daphne, but her interest in Clarence’s pig arouses Connie’s and Beach’s suspicions. Guest starring Jessica Hynes as Daphne. With the arrival of sophisticated widow Daphne and her spoiled brat Huxley, Connie once again...
Regisserat av: