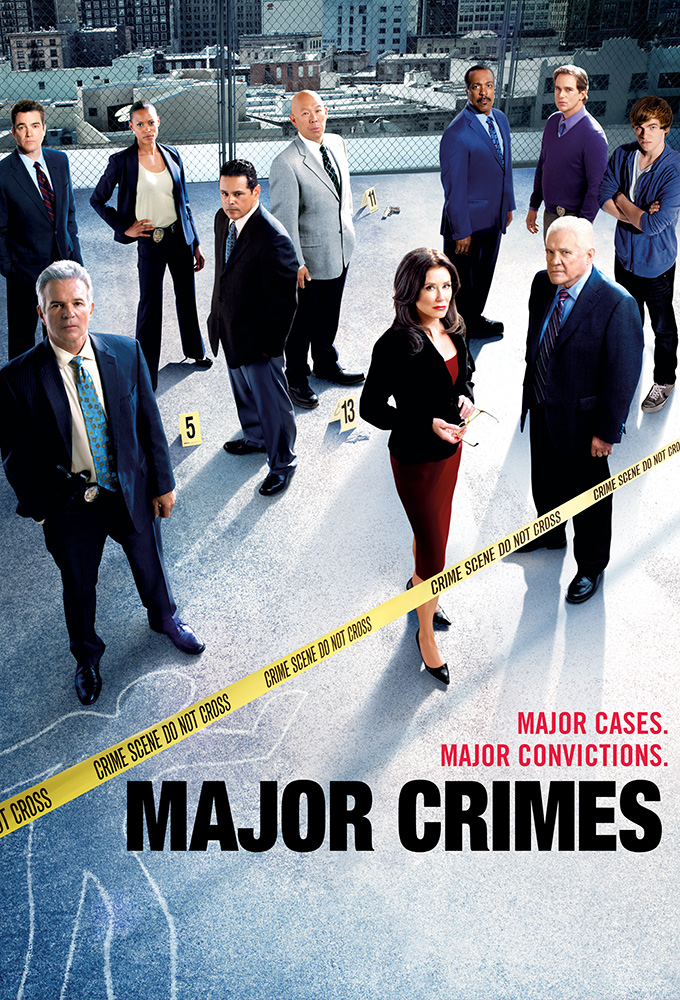 (2012)
Originaltitel: Major Crimes
Skapad av: James Duff
Release: 2012-08-13
TV-bolag: TNT
Längd per avsnitt: 60 min min
Status: AVSLUTAD
Two-time Oscar nominee Mary McDonnell stars in this spin-off of The Closer, taking the detectives in the Los Angeles Police Departments Major Crimes division into bold new territory. As the new boss, McDonnells Captain Sharon Raydor is determined to lead the department with a more team-oriented approach, sharing the credit with the people with whom she works. The show focuses on how the American justice system approaches the art of the deal as law enforcement officers and prosecutors... (TheTVDB)
Crime Drama Mysterium

1
2
3
4
5
6
SÄSONG 1

1
Reloaded 2012-08-13
Reloaded
2012-08-13
The department is still reeling with the recent departure of Deputy Chief Brenda Lee Johnson, creating a tough transition for the newly appointed head of Major Crimes, Captain Sharon Raydor. But there is little time for adjustment as the department rushes to reach a plea bargain when a string of...
Regisserat av:

2
Before and After 2012-08-20
Before and After
2012-08-20
Growing pains within Major Crimes become apparent as the division works to obtain justice in a brutal homicide that turns out to be more complicated than expected. Raydor struggles to gain the respect of her colleagues while also trying to supervise Rusty 24/7. The changes within the department may...
Regisserat av:

5
Citizens Arrest 2012-09-10
Citizens Arrest
2012-09-10
When a kidnapping turns deadly, the squad scrambles to crack the case and turns to a district attorney for help. Meanwhile, DNA evidence shows that Rusty has connections to the justice system.
Regisserat av:

6
Out of Bounds 2012-09-17
Out of Bounds
2012-09-17
The aftermath of a deadly shooting on gang turf finds Raydor making a daring maneuver that could threaten her career and jeopardize Det. Sykes life. Elsewhere, Rusty makes it quite apparent that he has no interest in meeting his biological father.
Regisserat av:

7
The Shame Game 2012-09-24
The Shame Game
2012-09-24
When an activist to end human trafficking is murdered, the investigation leads to a possible eyewitness, a young prostitute wanting to get out of the business, and the pimp she works for becomes their primary suspect. Meanwhile, child services arrange a meeting between Rusty and his father, against...
Regisserat av:

8
Dismissed with Prejudice 2012-10-01
Dismissed with...
2012-10-01
When a murder conviction is overturned after eight years, Tao is forced to question his past actions. And Rusty struggles to be himself during his first outing with his father, Daniel Dunn.
Regisserat av:

9
Cheaters Never Prosper 2012-10-08
Cheaters Never...
2012-10-08
A man from Las Vegas is found dead after an apparent overdose, but the facts become unclear as gritty details begin to unfold. Meanwhile, a series of strange events leave Rusty and Raydor wondering if Dunn (Ian Bohen) can be trusted.
Regisserat av:

10
Long Shot 2012-10-15
Long Shot
2012-10-15
Season Finale. When a peaceful ceremony turns deadly, Major Crimes and the FBI team up to track down a dangerous sniper. And Raydor negotiates a deal that even Provenza can get behind.
Regisserat av: