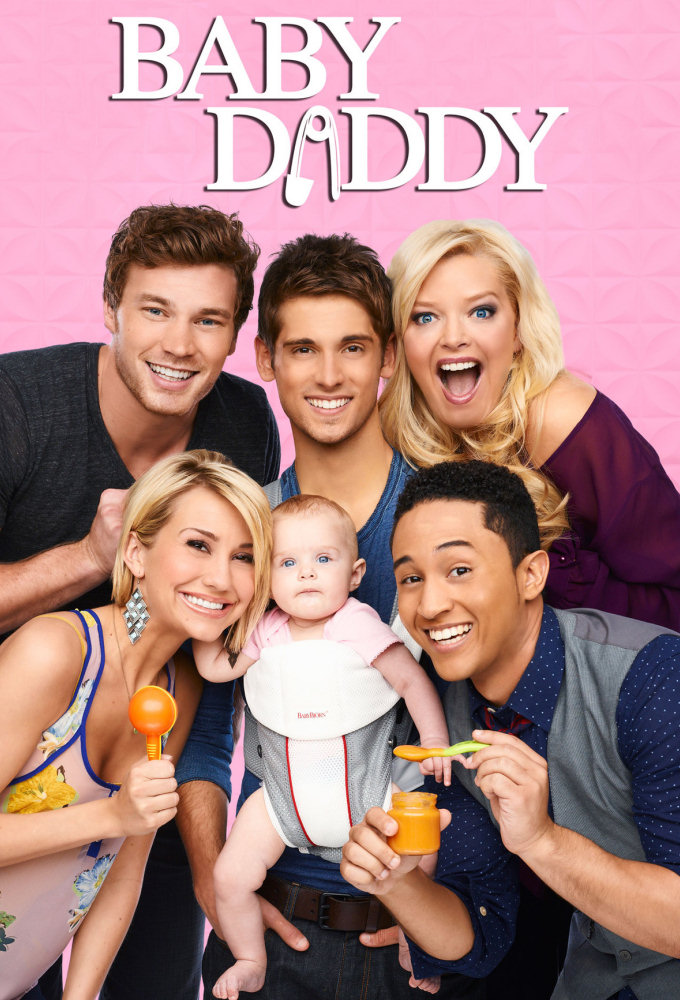 (2012)
Originaltitel: Baby Daddy
Skapad av: Daniel Berendsen
Release: 2012-06-20
TV-bolag: ABC Family
Längd per avsnitt: 30 min min
Status: AVSLUTAD
Baby Daddy is a multi-camera comedy about twentysomething Ben who becomes a surprise dad to a baby girl when shes left on his doorstep by an ex-girlfriend. Ben decides to raise the baby with the help of his mother Bonnie, his brother Danny, his best buddy Tucker and his close friend, Riley, who is harboring a secret crush on him. (TheTVDB)
Komedi

2
I Told You So 2012-06-27
I Told You So
2012-06-27
Miscommunication between Ben and the guys causes their foolproof baby-sitting schedule for Emma to fall apart. Ben, feeling his first parental gut wrenching scare that he could have lost his child, realizes he needs to get his act together to really become a good parent to Emma.
Regisserat av:

5
Married to the Job 2012-07-25
Married to the Job
2012-07-25
When Ben hears of an open management position at the bar, he enlists Rileys help to prove to the owner, Henderson, that hes responsible enough for the job. Tucker and Danny exchange the super-girly stroller Bonnie bought for a much cooler one - one that seems to be a total girl magnet.
Regisserat av:

6
Take Her Out of the Ballgame 2012-08-01
Take Her Out of the...
2012-08-01
After winning their first game, Bens softball team votes for Riley to replace Ben as team captain. Riley takes the role much too seriously, and the team asks Ben to set things right. Danny learns that Bonnie is dating his hockey coach and plots to break them up.
Regisserat av:

7
May the Best Friend Win 2012-08-08
May the Best Friend...
2012-08-08
Ben and Tucker put their friendship to the side when they compete for the heart of the same woman they met at a concert, Ava. Danny is asked to give a speech in front of his team, but is nervous, so Riley gives him public-speaking advice. Bonnie creates a profile on a online dating website.
Regisserat av:

8
The Daddy Whisperer 2012-08-15
The Daddy Whisperer
2012-08-15
Before Izzy agrees to let Ben join her elite Mommy and Me class, she offers to meet one-on-one to help him clean up his act. Tucker and Danny set up a man cave in the laundry room. Bonnie and Riley go shopping, but Emma gets too grabby with the merchandise and the girls are held for shoplifting.
Regisserat av:

9
A Wheeler Family Christmas Outing 2012-08-22
A Wheeler Family...
2012-08-22
Ben tries to bring everyone together for Emmas first Christmas photo - including his dad, Ray, who is keeping a surprising secret from Bonnie and the boys. Riley and Tucker find Dannys journal from high school, and Riley tries to figure out who he had a crush on.
Regisserat av:

10
Something Borrowed, Something Ben 2012-08-29
Something Borrowed,...
2012-08-29
Riley is in full Maid of Honor mode as she counts down the days to Katie’s wedding. Ben is convinced that the wedding is going to be boring, and so invites troublemaker, Gene to spice things up. The morning after the rehearsal dinner, Ben wakes up to find Katie in his bed and neither he or Katie...
Regisserat av: