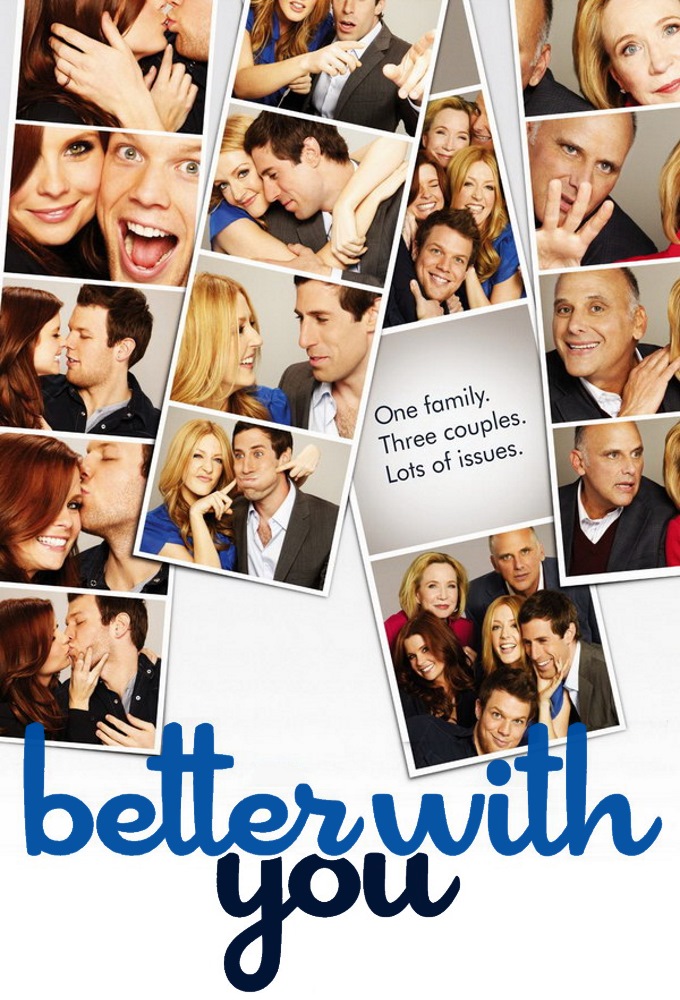 (2010)
Originaltitel: Better with You
Skapad av: Shana Goldberg-Meehan
Release: 2010-09-22
TV-bolag: ABC
Längd per avsnitt: 30 min min
Status: AVSLUTAD
The series revolves around three different relationships that are tightly intertwined in one family, as it follows a couple, Maddie and Ben, who had been dating for nine years and are happy just living together despite not taking the next step, marriage. (TheTVDB)
Komedi

2
Better With Firehouse 2010-09-29
Better With...
2010-09-29
Ben is secretly hurt when he is left out of the Putney familys Christmas card photo; Mia and Casey ask Maddie and Ben to be the people who say ``no to their future child
Regisserat av:

6
Better With Halloween 2010-10-27
Better With...
2010-10-27
Mia and Casey offer to give Maddie a Halloween-free party for her birthday, which falls on the same day as the holiday; Mia finds a mysterious videotape among Caseys things.

7
Better With Road Joel 2010-11-03
Better With Road...
2010-11-03
Joel and Ben accompany Casey on a road trip to Vermont to help him move his stuff out of storage. Ben looks at the trip as an opportunity to bond with Casey; but Joel sees the road trip as his annual chance to go off -- way off - of his salt-free diet. Meanwhile, the Putney women organize Mias baby...

8
Better With Flirting 2010-11-17
Better With Flirting
2010-11-17
Mia and Casey are excited when Maddie gets them a meeting with one of the top wedding planners in the city -- the charming but very expensive Lorraine Ashley. But the too-good-to-be-true arrangement turns awkward when it looks like Lorraine is trying to upstage the couples pending nuptials....

9
Better With Thanksgiving 2010-11-24
Better With...
2010-11-24
This Thanksgiving, everyone but Vicky is relieved when her oven breaks down. For once, the rest of the family can enjoy a normal Thanksgiving dinner and wont have to endure one of her unsavory concoctions -- such as maple syrup turkey stuffed with shrimp and raisins. And while spending the holiday...

10
Better With Christmas Crap 2010-12-08
Better With...
2010-12-08
Maddie and Mia agree that they are not looking forward to the annual tradition of spending Christmas with everyone at the family lake house, so Mia and Casey use the pregnancy as their excuse and Maddie comes up with her own tall tale.

11
Better With Skinny Jeans 2011-01-05
Better With Skinny...
2011-01-05
When Mia accuses Ben of ripping her favorite pair of jeans, she drags him to the store, where he has to break the tough news to Mia... its time for pregnancy pants. Meanwhile Joel decides to get himself into shape after he finds out hes ranked last in Vicky and her girlfriends fantasy husband draft...

12
Better With a Cat 2011-01-19
Better With a Cat
2011-01-19
After parents-to-be Mia and Casey adopt a cat, the pediatrician tells them they shouldnt have a stray animal around the baby. Maddie and Ben enter into a spirited competition with Vicky and Joel, all under the impression that if one of them takes in Mr. Meow-gi, then Mia and Casey will name that...
Regisserat av:

13
Better With Valentine's Day 2011-02-09
Better With...
2011-02-09
Casey has big plans for his first Valentines Day with Mia. But Ben and Joel tell him that their rule is to never buy expensive Valentines Day gifts for their ladies because doing so would set a costly precedent. Casey goes ahead with his plans anyway, and Ben realizes that he too wants to show...

14
Better With a Leather Jacket 2011-02-16
Better With a...
2011-02-16
The job interview-bound Casey, unaware that bad luck always follows the wearer of a particular leather jacket, borrows it without telling anyone. Everyone recalls their own bad experience while wearing the jacket, including Ben, who accidentally dropped a blanket on New York Yankee outfielder Nick...

15
Better With a Shamrock 2011-02-23
Better With a...
2011-02-23
Ben hopes to get his name inscribed on a shamrock at his favorite bar, but it looks like he will strike out in his efforts when he learns the establishments owner is New York Yankee Nick Swisher (appearing as himself), with whom Ben has a bad history. Meanwhile, Mia and Maddie use a secret language...

18
Better With Lying 2011-04-20
Better With Lying
2011-04-20
Maddie gets a feeling that the story Mia tells about how she and Casey met is not true; Vicky and Joel have Mia and Caseys engagement party at the country club and use it to promote Joels campaign to be the clubs treasurer

22
Better With the Baby 2011-05-11
Better With the Baby
2011-05-11
While in labor, Mia and Casey decide that they should be married before baby Charlie comes into the world. The rush is on to make the wedding happen, as Casey and Ben dash to City Hall for the marriage license; Maddie puts herself in charge of finding an authorized person to perform the ceremony;...