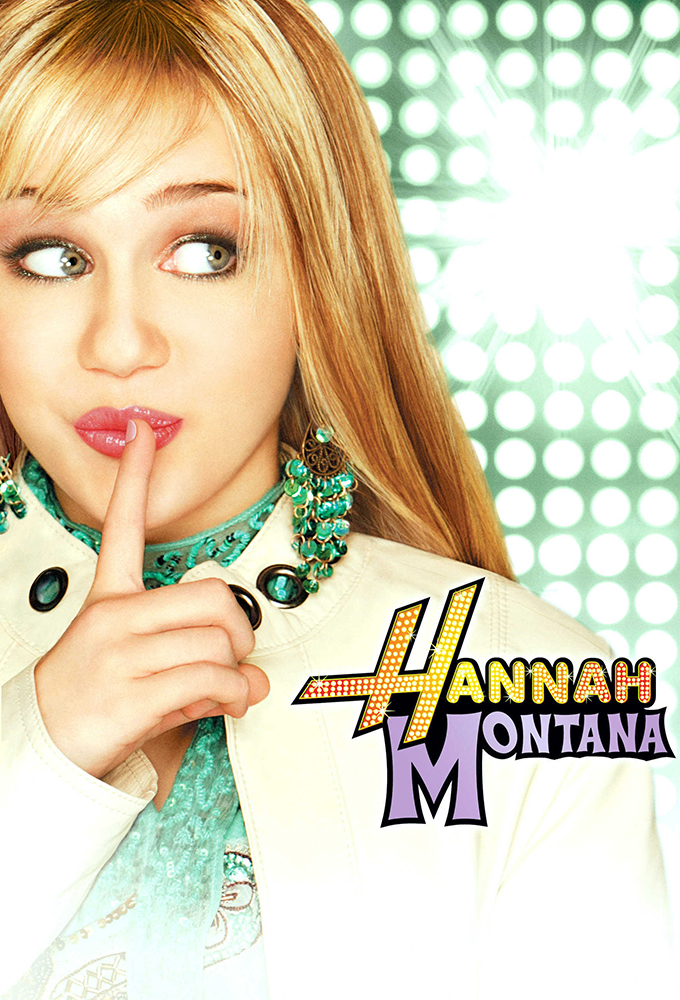 (2006)
Originaltitel: Hannah Montana
Skapad av: Richard Correll / Barry O'Brien / Michael Poryes
Release: 2006-03-24
TV-bolag: Disney Channel
Längd per avsnitt: 30 min min
Status: AVSLUTAD
Miley Stewart might seem like an average girl but she isnt. She moved from Tennessee to Malibu and is adapting to a new lifestyle. Miley has a huge secret only known by her dad/manager Robbie Ray Stewart, her weird brother Jackson Stewart, and her two best friends Lilly Truscott and Oliver Oken. Miley Stewarts huge secret is she leads a double as the famous pop singer Hannah Montana along with her friend Lilly who also has a double life as Lola, Hannahs friend. (TheTVDB)
Barn Komedi

2
Miley Get Your Gum 2006-03-31
Miley Get Your Gum
2006-03-31
Oliver has a huge crush on Hannah Montana, but his feelings of love are not shared by Miley. No matter what she does, she cant seem to make Oliver realize that he & Hannah can never be, until Lilly comes up with a plan to burst Olivers love bubble. Jacksons proud to be the owner of a Brand New used...
Regisserat av:

4
I Can't Make You Love Hannah If You... 2006-04-14
I Can't Make You...
2006-04-14
Miley adores her new beau, Josh, but is unsettled to learn that he despises Hannah Montana. After spending their whole date trying to get Josh to change his mind about Hannah, he decides to attend a Hannah Montana concert, but only if Miley will go with him. Sparks fly when Jackson meets a new girl...
Regisserat av:

5
It's My Party, And I'll Lie If I Want To 2006-04-21
It's My Party, And...
2006-04-21
After Lilly embarrasses her at a Hannah Montana concert along with added pressure from her Hannah Friends, Miley decides to lie to Lilly, & tell her that the birthday party for Kelly Clarkson that they were going to was called off. Miley attends the party as Hannah, but must cover up her lie when...
Regisserat av:

6
Grandmas Don't Let Your Babies Grow Up... 2006-04-28
Grandmas Don't Let...
2006-04-28
The Stewarts are having a busy week. Hannah Montana about to preform for the Queen of England and the Queens granddaughter, Jackson is in his schools volleyball championship, and Miley and Jacksons Grandma (Mamaw Ruthie) is in town on a surprise visit. But when Mamaw only spends time with Jackson,...
Regisserat av:

7
It's a Mannequin's World 2006-05-12
It's a Mannequin's...
2006-05-12
Its Mileys birthday! Robbie is trying to find something special for his little girl. Miley tells Lilly to steer Robbie to the right clothes, but it still doesnt work. Now Miley has to wear this tacky sweater to her birthday party. Meanwhile, Jackson is trying really hard to give Miley a birthday...
Regisserat av:

8
Mascot Love 2006-05-26
Mascot Love
2006-05-26
Lilly decides to be a cheerleader with Miley in order to spend more time together, but they end up doing the opposite when Miley ends up being the team mascot. Meanwhile, in order to get some money from his father Robbie, Jackson willingly volunteers to unclog the sink for him. However, its not as...
Regisserat av:

9
Ooh, Ooo, Itchy Woman 2006-06-10
Ooh, Ooo, Itchy...
2006-06-10
Miley, Lilly, and Oliver are just itching to get revenge on bratty Amber & Ashley during a class camping trip, even though Robbie told Miley not sink to their level. When Miley and her friends give the girls their comeuppance, she thinks that they got away with it, but she finds herself with a...
Regisserat av:

10
O Say, Can You Remember the Words? 2006-06-30
O Say, Can You...
2006-06-30
Frustrated by Olivers stage fright, Miley vents to her dad that she doesnt want to help him with their upcoming drama class performance anymore, which a dismayed Oliver accidentally overhears. Miley gets a taste of what Oliver goes through, when Hannah Montana forgets the words to the National...
Regisserat av:

11
Oops! I Meddled Again 2006-07-15
Oops! I Meddled...
2006-07-15
Miley & Lilly play matchmaker for a Hannah Montana fan named Becca. The object of Beccas affection is Oliver & the girls manage to get them together. Oliver wishes that they would have stayed out of his love life though, when Lilly and Miley find out something upsetting about his new squeeze....
Regisserat av:

12
On the Road Again 2006-07-28
On the Road Again
2006-07-28
Hannah Montana isnt the only Stewart family secret! Miley discovers that Robbie was once a pop star in his own right, but just as his career was taking off, he disappeared. Without asking her father if he even wants to make a comeback, Miley gets him a singing gig so that he can get on the road...
Regisserat av:

13
You're So Vain, You Probably Think This... 2006-08-12
You're So Vain, You...
2006-08-12
Lilly pride takes a hit when shes forced to wear her awful looking glasses right before a skateboarding contest. Hoping to help, Miley convinces her friend not worry about her appearance and to go ahead with the competition. Miley refuses to take her own advise, however, when its her vanity thats...
Regisserat av:

14
New Kid In School 2006-08-18
New Kid In School
2006-08-18
TV star Jake Ryan starts to attend classes at Seaview. All of the students & teachers are starstruck (Except for Miley) and cater to his every need. After being mistreated and getting into trouble for the same things that Jake was allowed to do, a frustrated Miley decides to tell everyone that shes...
Regisserat av:

15
More Than a Zombie to Me 2006-09-08
More Than a Zombie...
2006-09-08
Miley declines Jakes invitation to the school dance. While Hannah is filming a guest spot on Jakes show, she learns that Jake has feelings for a girl named Miley. She changes her mind about his dance invite, but Miley finds out that he has asked Lilly instead. Jackson and Robbie decide to see whos...
Regisserat av:

17
Torn Between Two Hannahs 2006-10-14
Torn Between Two...
2006-10-14
This Halloween, its not ghosts or goblins that are frightening Miley, but her Treat of a cousin, Luann. Apparently, Luann (Who could pass for Mileys twin) is really a Trickster and try as she might, Miley cannot get anyone to believe that Luann is out to get her. As Luann aims to expose Mileys and...
Regisserat av:

18
People Who Use People 2006-11-03
People Who Use...
2006-11-03
Miley sees Jake with a girl named Holly, and thinks shes his girlfriend, so she attempts to make him jealous by going out with another guy. Meanwhile, Jackson tries to get an A in his class by using Robbie and trying to make him go out with his teacher, Ms. Kunkle.
Regisserat av:

19
Money for Nothing, Guilt for Free 2006-11-26
Money for Nothing,...
2006-11-26
Sick of Amber and Ashley constantly winning the schools charity fundraiser, Miley, Lilly, and Oliver team up to raise more cash than the girls. Jackson needs Coopers help if he wants to beat Robbie at ping pong.
Regisserat av:

20
Debt It Be 2006-12-01
Debt It Be
2006-12-01
After Miley charges a wild shopping spree to her emergency credit card, she begs Jackson to help her pay it off before Robbie finds out. Jackson hatches a plan to auction off Hannahs old clothes and a fake pair of sapphire earrings given to her for a video shoot. The siblings manage to raise the...
Regisserat av:

21
My Boyfriend's Jackson and There's... 2007-01-01
My Boyfriend's...
2007-01-01
A sneaky photographer takes a picture of Hannah and Jackson, causing everyone to think that Jackson and Hannah are a couple. Meanwhile, Oliver has a school assignment with Sarah and he finds himself liking her.
Regisserat av:

22
We Are Family: Now Get Me Some Water! 2007-01-07
We Are Family: Now...
2007-01-07
Miley offers to let Jackson be Hannahs personal assistant after he loses his job because of her. But Jacksons assistance turns out to be more stressful than helpful.
Regisserat av:

23
Schooly Bully 2007-01-19
Schooly Bully
2007-01-19
A girl called The Cracker is constantly harassing Miley, so she turns to Roxy for ideas on how to stop the bully. Robbie and Jackson are wishin that they hadnt gone fishin when they get stuck in a cabin during a blizzard.
Regisserat av:

24
The Idol Side of Me 2007-02-09
The Idol Side of Me
2007-02-09
Amber and Ashley are up to their old tricks again, only this time Miley and Lilly devise a plan to give one of the girls a taste of her own medicine. A persnickety pooch named Oscar drives Robbie and Jackson batty with its constant barking.
Regisserat av:

25
Smells Like Teen Sellout 2007-03-02
Smells Like Teen...
2007-03-02
Hannah Montana agrees to endorse a new perfume, only she cant stand the smell because it brings back bad memories. Meanwhile, Jackson tries out for a television survival program.
Regisserat av: